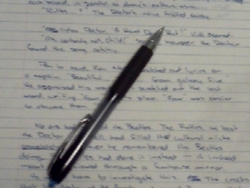 I’ve sometimes thought about turning my handwriting into a font; there are services that will do that for you. I like my handwriting that much, after all. 🙂

Even though many people think it’s a girl’s handwriting. 🙂