This summer, LEGO introduced a new theme, Alien Conquest, based loosely on classic tales of alien invasion, from H.G. Wells’ The War of the Worlds to 1950s B-movies and Mars Attacks!. Flying saucers, alien motherships, and tripod walkers bring the alien armada to the doorstep of LEGO City.

I’d gone to K-Mart because I needed a poster frame; I’d bought a print from DeviantArt, “Death Starry Night,” Star Wars by way of Van Gogh (and, yes, in the back of my mind I can hear Bill Nighy waxing philosophic on what the image means for the enduring power of the human experience), and it arrived in yesterday’s mail. The print was 12″ x 18″, and I went to three stores thinking that this was a standard size, but the closest I could find were 11″ x 17″ and 12″ x 14″, and I had no intention of cutting the print down to make it fit. Finally, at K-Mart, I found a 16″ x 20″ poster frame, and I decided that would work.

Since I was there, I wanted to see what they had in LEGO, and there, on the shelf, were the Alien Conquest sets. 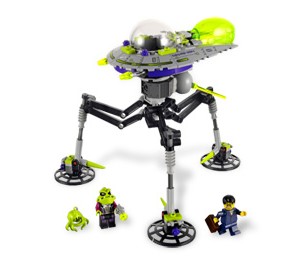 These sets were offered in the catalog at work a few months back. Riffing on the B-movie alien invasion films, Alien Conquest brings rampaging aliens to the LEGO City, and the centerpiece set, “Alien Mothership,” even comes with an alien sound brick, which I assume sounds like a theremin. If you love Tim Burton’s Mars Attacks! (and I do) or the Destroy All Humans! video games (and I do), Alien Conquest is just for you.

Since I’d just deposited two freelance checks this week, I decided I could splurge, and I bought one of the lower-end sets, Tripod Invader, which was just twenty dollars. I looked at it, and I thought “H.G. Wells! War of the Worlds!” The set comes with a tripod, an alien overlord (who looks like something out of Futurama, much like a few years ago when LEGO Castle went all WarCraft on us) with raygun, and a human businessman in a blue suit.

The set assembled fairly quickly. The instruction manual was dumbed down as compared to what I’m used to; each step noted which pieces and how many were used in that step, though this attention to detail came in handy when constructing the tripod legs where the hand-holding was valuable.

The thing that stood out, when I opened the bags and spread all the pieces on the kitchen table, was the neon glow of the some of the pieces. The bright, primary colors of LEGO gave way to neon green bricks and purple studs, and there was a strange green canopy. There’s also a lot of odd, custom bricks in the set, like three half-globe pieces that assemble to become the tripod’s laser cannon.

I’m not a great fan of LEGO sets that come with stickers that have to be applied to the surfaces. I miss the classic days of LEGO Space where the bricks came pre-printed with the control consoles and the like. I considered leaving the stickers off, but I ultimately affixed them to the control module’s surface.

The tripod legs, which were a mite complicated to assemble, have proved to be surprisingly sturdy. (The mistake I made was in attaching them on the linking brick backwards; it helps if you flip the page and get a top-down view of how the legs attach to one another.) Be aware, the tripod legs are not mobile once they are assembled.

The Alien Tripod set owes more to those old B-movies than it does to War of the Worlds, though I could easily envision building a replacement command module that was more in line with Wells’ novel that would attach to the tripod’s legs.

When finished, it was a fun little set, and I think it would pair up well not just with LEGO City or LEGO Space but with some of the off-brand building sets coming up, like Character Options’ Doctor Who Character Building sets or Hasbro’s KRE-O Transformers sets. The Alien Conquest aliens may not look anything like Wells’ Martians, but they do make passable Moffat-era Silurians. Yes, I can absolutely see these Alien Conquest sets matched up with the TARDIS set or the Optimus Prime set; if anyone can drive off the aliens from planet X2½ it would be the eleventh Doctor or the Autobots or, total nerd alert, both the eleventh Doctor and the Autobots. 😆

Or have the aliens go on a rampage at LEGO Hogwarts; how would Harry Potter’s magic fare against aliens from Planet X2½? 😉

I don’t know that I’ll buy many (or any) more of the Alien Conquest sets, but for a lazy Saturday afternoon, the Tripod Invader was just what I needed. :h2g2: