I moved to the York area a few months ago; I needed a new place to live, housing in Baltimore (where I still work, as a copywriter) is stupidly expensive, and southern Pennsylvania had the advantages of being inexpensive and commutable.

In the last month-plus, I’ve attended a handful of York Revolution games. The Revs are a team that plays in the independent Atlantic League. The Atlantic League is filled with players who are out of organized baseball and are trying to play their way back in; NPR’s Neal Conan called it “the last chance league” in his book, Play By Play. Wednesday night I’d gone to a game at Sovereign Bank Stadium to see the Revs play the Sugar Land Skeeters. When I was there, I saw someone wearing a Senators jacket, and a lightbulb went off. Harrisburg isn’t too terribly far from York, I could drive up and see the Senators.

Thursday I went online and bought a ticket for Saturday night’s Senators game. Section 302, the bleacher seats along the first base line, third row. Eight dollars.

To be honest, I didn’t know quite what I was buying. I found the stadium map when I purchased the tickets confusing; the layout didn’t really make sense to me. Even looking at pictures of Metro Bank Park online didn’t really help.

The drive up to Harrisburg from York was pleasant — that is, until I reached Metro Bank Park. Metro Bank Park is built on an island in the middle of the Susquehanna River. I’m not 100% certain, but I believe it’s only accessible to cars from a single bridge, the Market Street Bridge. Traffic on Market Street Bridge moved at a snail’s pace (I spent a good half an hour sitting above the Susquehanna — and recent bridge collapses out west were on my mind), but once I got into the parking area, all was good. Three dollars to park, not a bad deal.

You enter Metro Bank Park behind the left field foul pole. Unlike most parks I’ve visited, the field is not below ground level, and you do a lot of stair climbing before you enter. It was nice to see the Curly W (and lots of them) as I approached the park; the first thing you see is the ticket office and the back of the stadium shop, and there are Curly Ws and signs everywhere that let you know you’re about to see the Nationals stars of tomorrow. The one disappointing thing about the approach to Metro Bank Park is that you don’t really get a feel for the look of the park. There’s not a grand entrance or a memorable facade; you climb steps, and then you’re in.

Once you enter, you’re in a plaza, not unlike the outfield plazas at Nationals Park. There are picnic areas and a gift shop. The gift shop was roomy, and it offered Senators and Nationals-related merchandise. I bought a Senators hat and a stuffed mascot for my niece. I gave a dollar to the Veterans of Foreign Wars and received a Memorial Day poppy. I also bought the program book for two dollars; the feature article in this issue was on the 1993 Senators which is considered one of the hundred greatest minor league teams of all time.

The plaza along the left field side has banners of recent Senators greats like Ryan Zimmerman and Vladimir Guerrero. (The Senators have been affiliated with the Expos/Nationals since 1991.) In the concession area behind home plate there were plaques for the All-Time Senators team, which includes Stephen Strasburg.

To me, the ballpark had a Camden Yards-like feel. Partly it was the way the concession areas were laid out; you can’t see the playing field from them. Partly it was the atmosphere; the area behind the first base line reminded me of the party atmosphere along Eutaw Street with a live music stage, throwing cages, and standing tables.

The ballpark feels cozy. Yes, it has a larger capacity than Sovereign Bank Park in York (by about 1,500 people), but it’s the depth of the seating sections along the foul lines that contributes to that feeling of coziness; the bucket seat areas are only five or six rows deep. The grandstand area, of course, is much deeper than that, and there’s the bleacher area along the first base line, and there’s outfield seating which Sovereign Bank doesn’t have. No one is getting a nosebleed at Metro Bank Park.

The view from my seat was great. (I suspect that seats in Section 301 have a slightly obstructed view due to the grandstand.) At worst, I was a little further away from the action than I could get in the seating bowl at Sovereign Bank Park. I was certainly closer to the action than I was at Nationals Park two weeks ago in section 134.

The player introductions surprised me. I don’t think I’ve ever been to a game where the crowd didn’t clap and cheer for the home team as they were introduced. I didn’t really know who any of the Senators were — the only Senator in last night’s line-up with a name I recognized immediately was Brian Goodwin — but I clapped anyway. Either I was the only person cheering the introductions or the acoustics in the place were terrible, because otherwise it was dead silence.

To be honest, I don’t think it was acoustics.

Harrisburg’s opponent last night were the Reading Fightin’ Phils, the Phillies AA-affiliate, and Harrisburg was clearly Phillies country. The people around me, the ones who were more than a passive audience and were talking about the game, knew more of the Fightin’ Phils than I knew of the Senators. There were a lot of Senators hats in the stands — but there were also a lot of Phillies hats/jerseys/gear in the stands. My read is that the Senators were playing in front of a slightly hostile crowd in their own park.

As for the game itself, it was fine. The Senators made some sloppy mistakes that cost them; the Phils scored runs on a wild pitch and a pick-off play to first that led to two throwing errors on the part of the Senators. I liked that the pitchers batted; Senators starting pitcher Blake Treinen hit a double, and I don’t think anyone was more surprised than he. 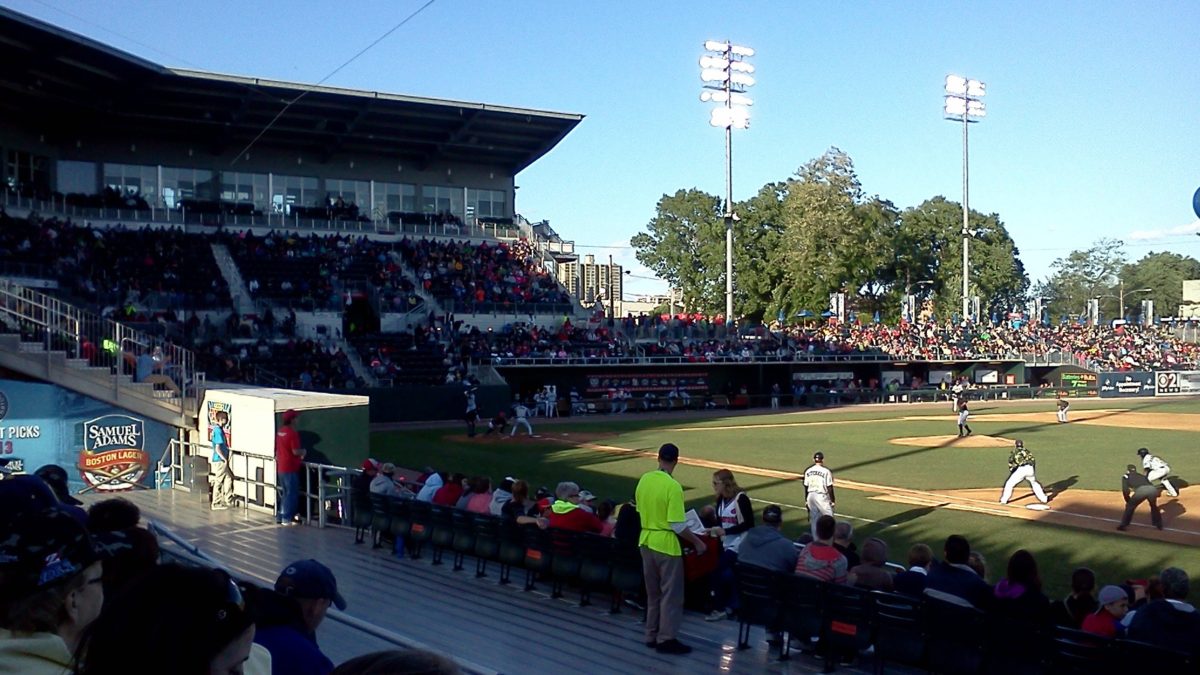 Like every minor league game I’ve been to, there was between innings entertainment and a t-shirt toss. The host for these segments was Bob Hauer, a radio personality on Harrisburg’s classic rock station. (True story. When I moved to York and started listening to 97.3 on my morning commute, I thought Bob Hauer was actually Bob Howry, former Cubs set-up man. It just the way he said his name.) Hauer wore a Strasburg Senators jersey, and Rascal, the Senators’ mascot, participated in some of the entertainment. There was a trivia contest. There was a “follow the hamburger patty” contest. There were racing ketchup bottles. The between innings entertainment wasn’t terrible. It’s what you expect at a minor league game, and I’ve seen similar things at every minor league game I’ve been to in the last decade. At the same time, I’m not exactly sure what it’s for.

In the later innings, fans in the grandstand tried to get The Wave going. I’ve participated in The Wave at Nationals Park, but there the seating sections are deep and go all the way around the field. I’m not sure The Wave works in a minor league park; the seating sections are too small, too confined, and by that stage of the game the crowd was thinning out. I applaud the Wavers for their enthusiasm, but the mechanics of the thing were against them.

The crowd started to leave as early as the third inning, and the trickle turned into a mass exodus around the sixth. It was a chilly night on City Island, the Senators were hopelessly out of the game, and the result felt like a foregone conclusion. Plus, if there’s only one bridge onto the island, there’s also only one bridge off, and I imagine that was certainly a factor for many.

I did not stay until the end of the game, either. I haven’t left a game early since childhood; my dad used to take me to Harrisonburg Turks games in Virginia’s Shenandoah Valley, but I was young then. In adulthood, I can’t think of an occasion when I left the game early. I suffered 16 innings at a Yankees game in the rain in 2001. But it was cold, the temperature was plunging, and I had stupidly left my jacket in my Beetle. It wasn’t the traffic getting off City Island that concerned me. It was the cold and the wind. And so I left in the eighth inning.

As I was going around the concourse on my way out, I realized that Metro Bank Park was built in the wrong direction. Harrisburg was lit up and the capitol dome was illuminated in the night across the waters of the Susquehanna. That would have been a fantastic view over the center field wall, yet you can only see that view from the concourse behind the grandstand. If the field had been turned 180 degrees, there would have been a wonderful view. Instead, the center field view is trees.

How did the Senators experience compare to the Revolution experience? Well…

Concession prices were lower at Metro Bank Park than they are at Sovereign Bank Park. There were also more concessions.

Metro Bank Ballpark has an out-of-town scoreboard. I don’t know that I’ve ever seen this at a minor league park before. Not only did it post scores of other Eastern League games, but it also posted scores of the major league games. I don’t know if fans really cared how the Richmond Flying Squirrels or the Trenton Thunder were faring in their games, but I thought it was a neat touch. Perhaps that’s something Sovereign Bank Park could implement next season — an out-of-town scoreboard with MLB and Atlantic League scores.

Beyond that, the quality of gameplay was roughly the same. The Senators game moved a little faster than a Revs game (for some reason, Atlantic League games are slow), though I couldn’t discern a reason for the difference.

Will I go back to another Senators game? Almost certainly. I’m not sure when. Maybe July. I have a pocket schedule, and maybe when I have a free evening, I’ll drive up to Harrisburg to see once more the Nationals stars of the future.