I have always been fascinated by World War I.

World War II has more things going for it — tank battles, bombing campaigns, the Normandy invasions, the Pacific theater — but World War I interests me more. Perhaps it’s the trenches. Perhaps the poetry. It may even be the futility and the waste. I have no personal connection to World War I, though the barber in the town where I grew up was a drumboy in Pershing’s army, yet I’m interested in the war all the same.

Several years ago, I learned that Paul Gross of Due South had written, directed, and starred a film about the war titled Passchendaele about the Canadian experience in the war. If the film ever saw release in the United States, I never saw it, and though I looked occasionally online to price the DVD, it was never at a price that made sense for a blind buy.

Then on Saturday, at Wal-Mart, I found a collection of war films for five dollars, and among those films was Passchendaele. 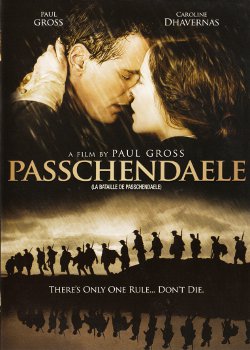 Gross stars as Sargeant Michael Dunne. Following a harrowing attack by his squad on a German machine gun nest, Dunne is invalided home to Calgary where he is tended to by an attractive nurse, Sarah Mann (Caroline Dhavernas), and assigned to a recruiting detail headed up by a Boer War veteran who believes that Dunne, who has been diagnosed with neurasthenia due to his experiences in France, is a coward. As Dunne readjusts to life on the homefront, he also develops a relationship with Sarah. Meanwhile, Sarah’s brother David, an eighteen year-old asthmatic, wants to enlist to impress his girlfriend’s father, the town doctor, but when Dunne refuses to take him on medical reasons, Dunne’s superior takes him anyway, and Dunne reenlists under a false name so he can be sent to France and look after David. There, Dunne’s fake identity is blown and he and David take part in the Third Battle of Ypres.

I liked the film. It was visually impressive and directed well. The battle at Passchendaele (the last half hour of the film, roughly) compares favorably with the opening half hour of Saving Private Ryan. There were strong performances from Gross and Dhavernas. There are haunting images, and the ending is powerful and moving.

However, the film is not perfect, and it has a number of flaws.

Passchendaele is basically two films. There’s a romance. And then there’s a war movie. The links between these two movies depend a lot on coincidence. I know that for artistic reasons all the plots are going to converge at Passchendaele because it would be a cheat to the audience if they didn’t. However, it’s entirely too coincidental that the major characters all arrive in that place through their different paths.

Plus, there are narrative threads that lead nowhere. Some even defy all logic.

Take, for instance, Dunne’s invaliding home. That’s not quite accurate. Dunne was injured in the attack on the machine gun nest, yes. He was awarded a distinguished valor medal for it, yes. But he also went AWOL, and when we see him in Calgary he’s been sent there to recuperate following his capture while the Army decides where he’s going to be executed for desertion. Instead, the Army assigns him to recruitment detail. The whole desertion angle is an unnecessary plot complication because it doesn’t affect anything. Dunne’s superior in Calgary would still think that Dunne was a coward whether or not he had deserted; other scenes make it clear that his experiences in the Boer War simply have no analogue in the trenches of the Western Front that Dunne has experienced.

Next, Nurse Sarah Mann is a morphine addict, and she steals morphine from the Army hospital in Calgary. I’m not sure why this was necessary, except that it then gave us a detox sequence later in the film when Dunne helps her break the habit, because it doesn’t lead to anything. It shows us that Sarah is broken, but she tells Dunne that she’s broken, and we learn another reason for her brokenness, a reason that her brother shares.

Which leads us to Sarah and David’s father. We learn that he was a soldier in the Canadian Corps and died in the fighting at Vimy Ridge. David feels that he can’t live up to his father’s example because of his asthma, Sarah turns to morphine to deal with the pain. But then we learn that their father isn’t dead at all. Instead, he was an immigrant from Austria, he defected to the German lines during the battle, and British Intelligence has learned that he’s serving in the Kaiser’s army. Again, this is a plot complication that has no pay-off, unless the nameless German officer at the end of the film is meant to be Sarah and David’s father, but if that’s so then it’s also not clear.

Finally, I don’t understand why the recruiting officer pursued Dunne to France, unless it was so he could die a horrible death in a war he didn’t understand. (Which he does.)

I think you could edit these problems out and the film would be tighter and stronger for it. Passchendaele doesn’t need the desertion plot, it doesn’t need the morphine plot. The film could be stripped down to 95 minutes or so, and what you’d end up with would be a really good Hallmark Hall of Fame movie. That’s what Passchendaele feels like now, just with a little flab.

All of that said, I have no trouble recommending Passchendaele. It’s not perfect, but no film is. You can tell that Paul Gross put a lot of passion into this film, and what he made is something that’s engaging, entertaining, and ultimately moving. Passchendaele is as much about the people who caught up in World War I as it is about the pointlessness and waste of the war.