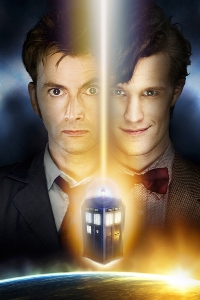 Gaiman announced this first through his Twitter feed, and then spoke at length with SFX magazine:

As anyone who’s read my blog knows, I’m a big fan of a certain long-running British SF TV series. One that started watching — from behind the sofa — when I was three. And while I know it’s cruel to make you wait for things, in about 14 months from now, which is to say, NOT in the upcoming season but early in the one after that, it’s quite possible that I might have written an episode. And if I had, it would originally have been called “The House of Nothing.” But it definitely isn’t called that any more.

Countdown. You’ve got about 14 months.

This is pretty exciting stuff.

Gaiman! Doctor Who! And Stephen Fry has been making noises about possibly writing for Doctor Who again, after a previous script fell through.

Doctor Who. It’s become… respectable. Just look at the talent lining up. Gaiman. Fry. Richard Curtis, the creator of Blackadder. Michael Moorcock. Could it be that Doctor Who is becoming the media franchise to beat?

One thought on “On Neil Gaiman’s New Gig”