Saturday mornings I have a routine.

I get up. I fix coffee. I eat a bowl of cereal. I listen to Weekend Edition Saturday on NPR.

This has been my routine for pretty much the past three years; prior to that, I always worked on Saturdays, and thus Weekend Edition wasn’t something I could listen to.

One of the things I like the most about Weekend Edition? The news commentaries by Daniel Schorr.

Schorr has such a rapport with Weekend Edition host Scott Simon, and Schorr, with the experience born of a career that stretches back seventy years, manages to put events into a political and historical context that is unmatched. 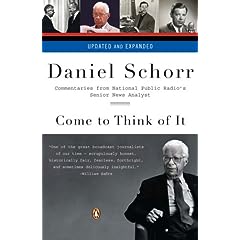 Over the weekend, in my quixotic quest to find headphones for the office, I came across at Big Lots a copy of Schorr’s book, Come To Think Of It, a collection of his NPR commentaries from 1990 through mid-2008.

Instead of reading this, however, it was another book — a craptacular book, at that — that I put in the shoulder bag I take to work each day. This morning, however, I picked up Come to Think of It, and on the subway and train I read through it, pretty much at random.

In some ways, it’s a time capsule, commentary on political moments, domestic and foreign, a collection of the “first draft of history” as journalism is sometimes called.

What struck me, in skimming through the commentaries from 1993, was how much the health care debate raging today is a retread of what the country went through seventeen years ago. What’s the joke? The first time through history is tragedy, the second time farce. In a way, the debate then is tragedy; we wouldn’t be here today if Clinton’s health care plan had flown.

As a London economist has noted, the momentum behind some kind of federal reform to America’s health system now seems unstoppable, but probably not without a battle royal over who controls, and who pays.

Much like the stars seemed aligned after Obama’s election for comprehensive health care reform, it seemed after Clinton’s election that health care reform was possible then, too. Unlike this time around, the Republicans were even interested in offering proposals (which were identical to what’s actually passed the Senate now), until Bill Kristol argued that any health care package would benefit Democrats electorially, not Republicans, and convinced the Republican Party to walk away from the subject.

Opponents tends to associate the word “socialized” with socialistic. In its first dictionary meaning, to “socialize” is to make fit for society or life with others. But perhaps that poitns to the true underlying issue that agitates the nation and confuses Congress. Listen to talk shows and you’ll hear people, asked if they are willing to pay for universal health care, almost universally respond, “Hell no.”

As Ezra Klein posts out at the Washington Post, health care reform itself polls as unpopular, yet the individual components of what Congress is discussing are wildly popular. Are people not understanding the issues because the issues aren’t being explained well? Or are linguistic problems — like the word “socialized” — the issue?

I’m reminded of a long-time friend who posted a brief rant against socialism on my Facebook page. There was no need for it; a “public option” isn’t socialism, it’s just another option. And no one has argued for imposing socialism on the health care industry; I don’t seen anyone credibly arguing that we nationalize health care providers and turn them into employees of the state.

An issue of language, then. “Socialized medicine” doesn’t mean socialism. And even if it did, the great democracies of Europe are socialist to a greater or lesser degree. Socialism isn’t incompatible with democracy.

Schorr devotes perhaps five or six pages of come to Think of It to the Clinton health care plan. It’s pages enough that the parallels between then and now are plain to see, which is, perhaps, why the Republican Party is looking for a repeat of 1994 this autumn.

Which is why the best thing the Democrats can do in the next month is to reconcile the bills the two houses of Congress have passed and take the legislative victory.