Yesterday I made up to Harrisburg for my first two Senators games of the year; they were playing a double-header against the New Britain Rock Cats (AA affiliate of the Twins). I had not intended to get to mid-May without attending a baseball game; indeed I had bought a Senators ticket plan with an early April game, but the transmission on my VW Beetle gave up the ghost and it spent five weeks (most of April and the first week of May) in the shop.

Suffice it to say, I was looking forward to my first game, and around Wednesday I began to get really excited. I was virtually bouncing off the walls, and I couldn’t wait to leave the apartment yesterday to head up to Harrisburg.

And it could not have been a better day. Temperatures in the high sixties. Blue skies and cumulus clouds. And as I climbed the steps from the parking lot and crested the hill down toward the stadium, a joyous grin broke out.

Oh, Metro Bank Park, how I missed you! 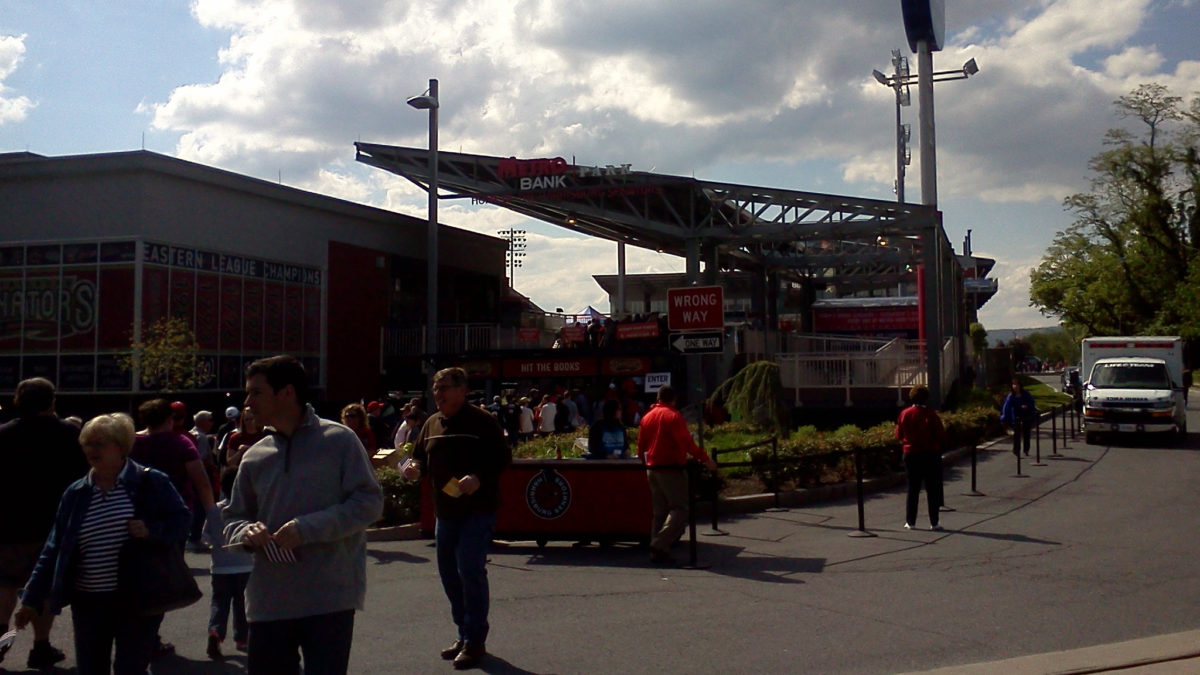 This year, a sight not unfamiliar to Nationals fans greets you as you enter the left field gate — a giant banner of Stephen Strasburg on the mound, pitching for the Senators. 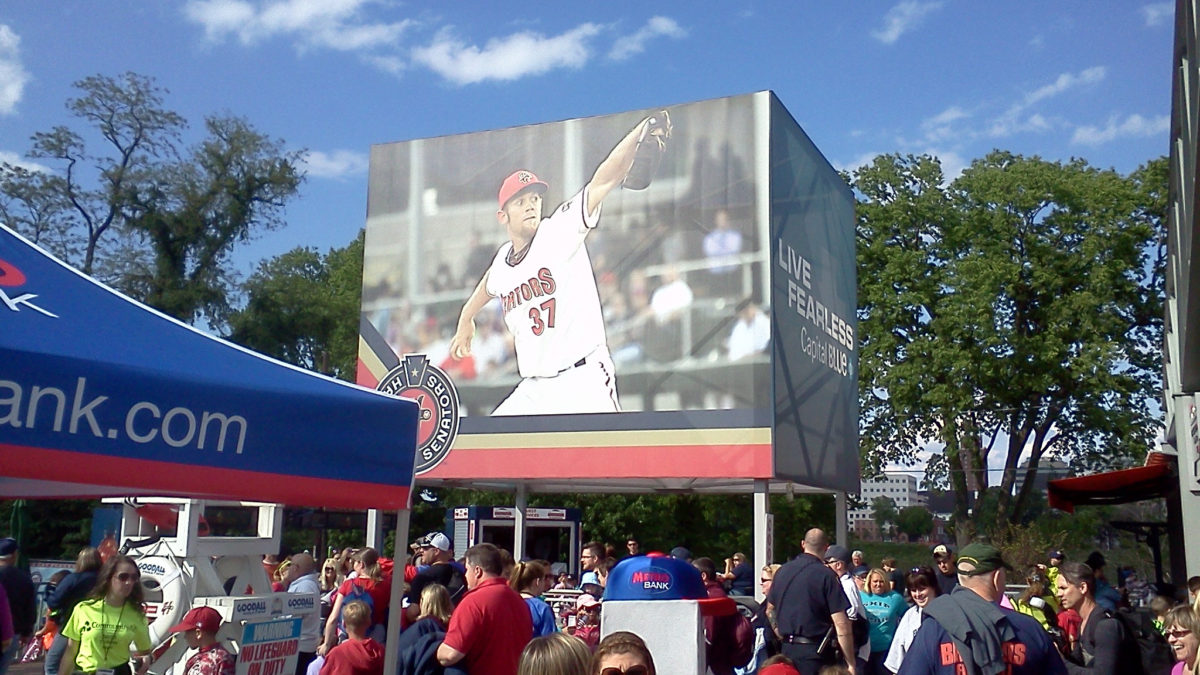 Also, the team has added a Bryce Harper banner to the concourse walk of Senators greats: 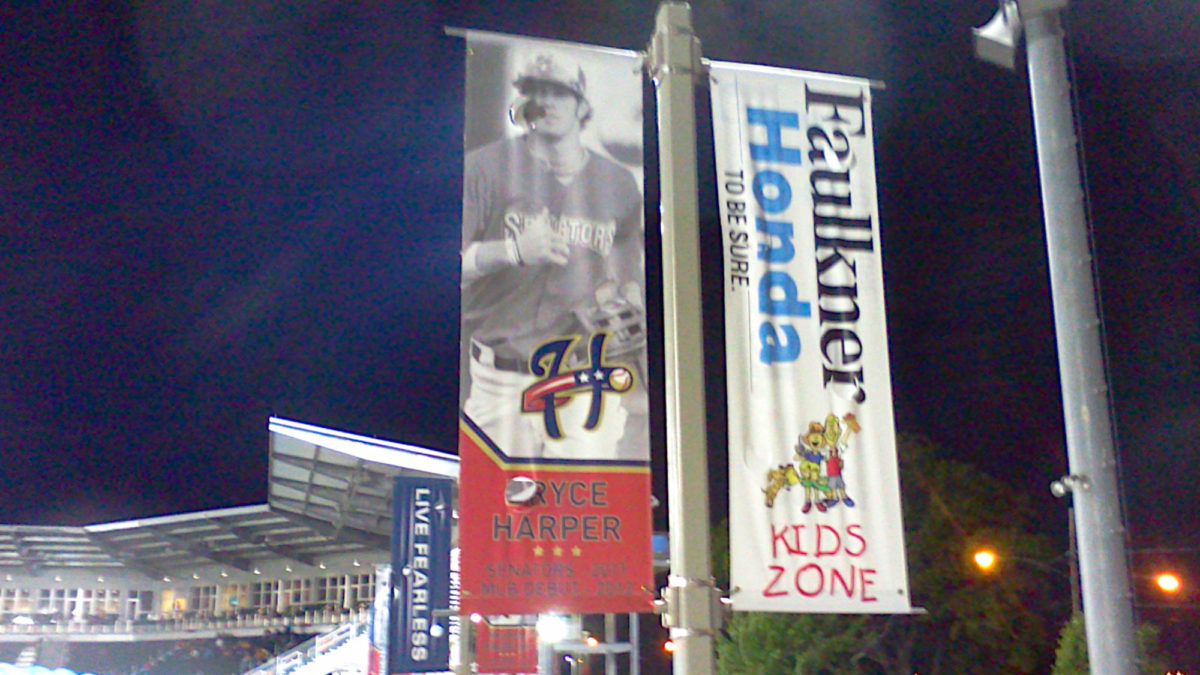 Senators manager Brian Daubach was profiled by Mayflies and Big Flies‘s Mick Reinhard in the game’s program book, and Daubach was signing the program book for fans at the program stand. I made sure to get his autograph, and I wished him and his team good luck.

They needed it. The Senators this year are having a disappointing season. That’s probably the best and most charitable way to put it. The players have a history of success. A number came from last year’s Potomac Nationals, others came from last year’s Senators, and both teams reached their respective leagues’ playoffs. But, for whatever reason, the Senators have some glaring weaknesses. The starting pitching beyond A.J. Cole has struggled, and some of the important bats, like Matt Skole, haven’t warmed up yet. The result is a team that likely has the Nationals front office asking every day, “What’s wrong up in Harrisburg?”

There was a large crowd on hand for the first game — and lots of children. There were tickets given out to children for reading, and there were several local little league teams in attendance (and they got to stand on the field during game one’s national anthem). 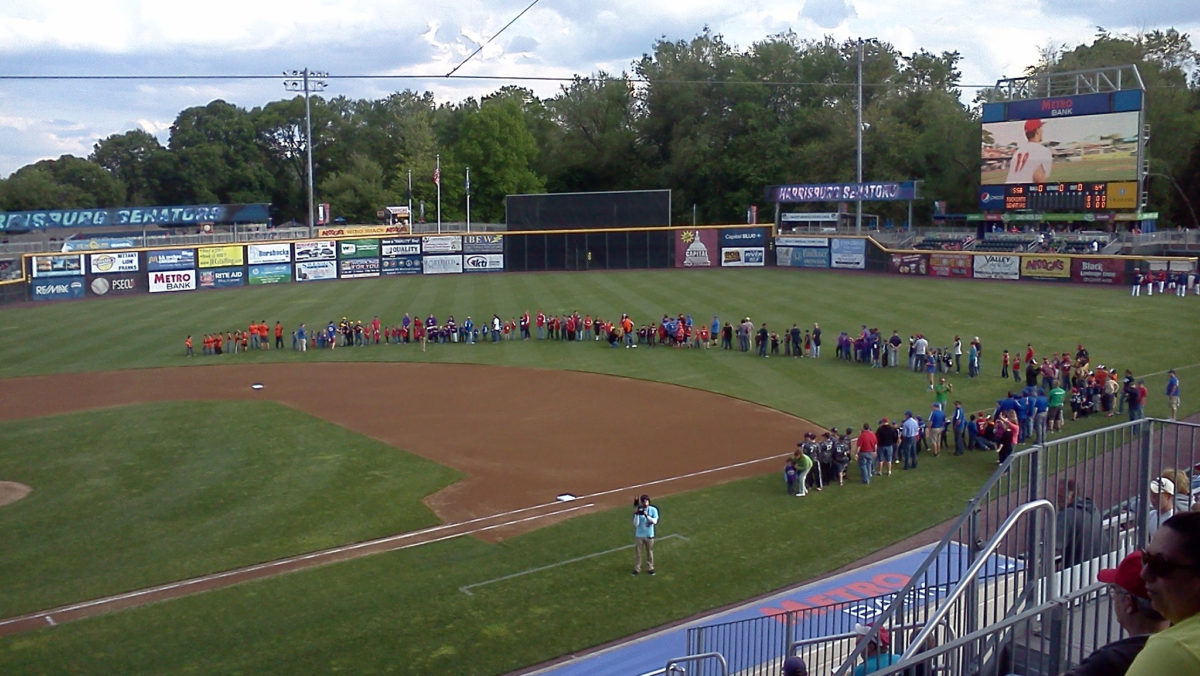 A little past six o’clock, Cole took the mound, and we were off. 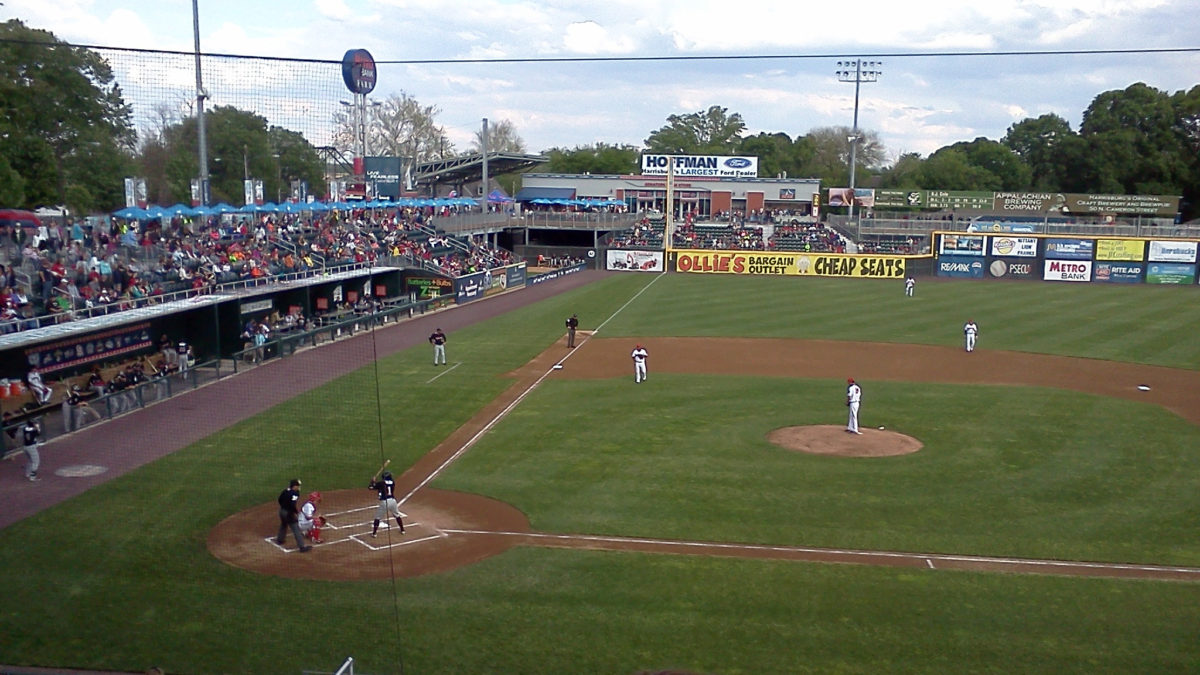 Cole pitched a gem, throwing a shutout and going the distance in the shortened game. (The Eastern League plays seven inning games during doubleheaders.) Michael Taylor and Cutter Dykstra both homered in the first game, and the Senators won 5-0, snapping a six-game losing streak.

Game 2 began at about quarter to nine, and the audience began to stream out during the intermission between the games. If there were seven thousand people on hand for game one, game two had an attendance of roughly half that.

Brian Dupra started game two. He struggled a little in the first inning, but got out of it without any damage. In the second inning the Senators scored a run, and in the second they added two more (a 2-run home run by Taylor) for a 3-0 lean. Dupra then ran into difficulties in the third. There were rundowns between second and third and between third and home (which ended with two runners standing on third), and suddenly it was 3-2. Then Quincy Latimore threw out a runner at home, and the Senators escaped the inning without further damage.

After that, game 2 was all Senators. Justin Bloxom hit a two run blast in the fourth, Kevin Keyes followed in the fifth with a two run homer of his own.

Kids could run the bases after game 2, but I didn’t stay for that. It was already past eleven o’clock, and there weren’t many kids left. Instead, I wanted to walk across the Walnut Street bridge across the Susquehanna to Front Street and then back.

And so I did. The temperature had fallen into the low fifties, and there was a chill breeze. The river was up, and as I walked across the bridge I could hear the water roaring around the support pillars and see it churning if I looked down through the grating. It was a pleasant night, I look a leisurely stroll across and back, and on the way back I saw a gorgeous moon rise.

Now, a few final thoughts on the experience.

First, I like my seat in the ticket package. It’s in section 207, not far below the media booth. (And if any Senators media types noticed someone below them doing GOB’s version of the Chicken Dance from Arrested Development during game 2’s between-innings chicken dance, that was me. The high school students I was seated next to had no idea what I was doing. Youth today.) I love the bleachers at Metro Bank Park, but this seat will do. And for the first time ever I got my hand on a foul ball batted into the stands. 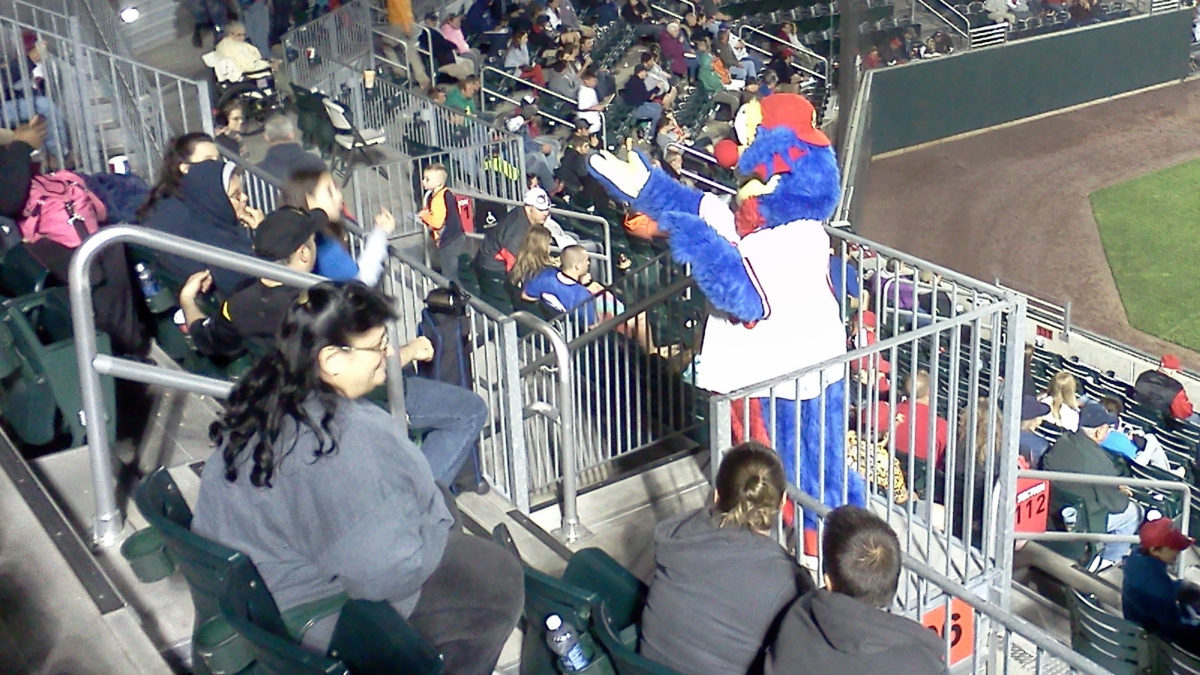 There’s a woman seated there to the left, in a gray sweatshirt. She got taken out by a guy probably half her age during game 2’s t-shirt toss. She ended up with the shirt, she rubbed her left arm for a while, and they both glared at each other until she finally left. Someday, someone’s going to get really hurt, and it will be for the stupidest of reasons — a cheap t-shirt.

Barring any unexpected, I won’t be back in Harrisburg to see the Senators for a month. Which is okay; last night’s games were everything I hoped they would be. I had seen two exciting baseball games, I’d had a nice time, I talked to people, I didn’t spend any money in the stadium store, and I felt good. All good things in my book.