Friday afternoon I spent at least half an hour looking at pictures of Operation Crossroads, the first two atomic bomb tests in Bikini Atoll. Why? Because one of the ships used was found — the USS Independence — and was virtually intact.

This quote about the state of the Independence by NOAA’s James Delgado stays with me: “After 64 years on the seafloor, Independence sits on the bottom as if ready to launch its planes. This ship fought a long, hard war in the Pacific and after the war was subjected to two atomic blasts that ripped through the ship. It is a reminder of the industrial might and skill of the ‘greatest generation’ that sent not only this ship, but their loved ones to war.” They built those ships to last, but with the war done and America demobilizing, there was all this military hardware that was of absolutely no use.

The idea in Operation Crossroads was to see what an atomic weapon would do in battle to a Navy fleet. So a bunch of World War II ships that were due to be scrapped, like the Indy, were sent to Bikini Atoll to be test subjects. An enormous flotilla was assembled, from liberty ships and landing craft to battleships and carriers. The ships were crewed not with people but with goats and pigs to ascertain whether a nuclear attack on a fleet would be survivable. And it was something of a spectator sport; some 40,000 people were on hand to observe the tests.

In the Able test, a bomb (similar to Fat Man) was dropped on the fleet. The Indy was one of Able’s victims. A few ships sank. Some burned. The Indy was one that burned. The fires were controlled, and the ship lived on for the next test. As the Able test was an air burst whose fireball didn’t reach the water’s surface, there was no fallout from the detonation and, thus, virtually no radioactive contamination of the ships that survived.

The Baker test is the crazy one. They dangled a Fat Man-type bomb beneath one of the ships to simulate an underwater detonation. What they created was a giant, superheated shock wave bubble which gave way to a cauliflower mushroom cloud. The Baker test dumped radioactive water, sand, and mud on all the ships, it scorched the bottom of the Atoll and dug a crater on the bottom, created a radioactive tsunami within the atoll, and contaminated the area so thoroughly that the residents of Bikini Atoll still have not been able to return. (Yes, that was the intention. We could relocate the natives, detonate atomic bombs, and they could move back as if nothing had happened. How naive we were in 1946.) The ships that survived were so irradiated that the Navy couldn’t decontaminate them and the Charlie test was scrapped.

One of the enduring pictures of Baker is of the USS Arkansas vertical in the mushroom cloud’s funnel. 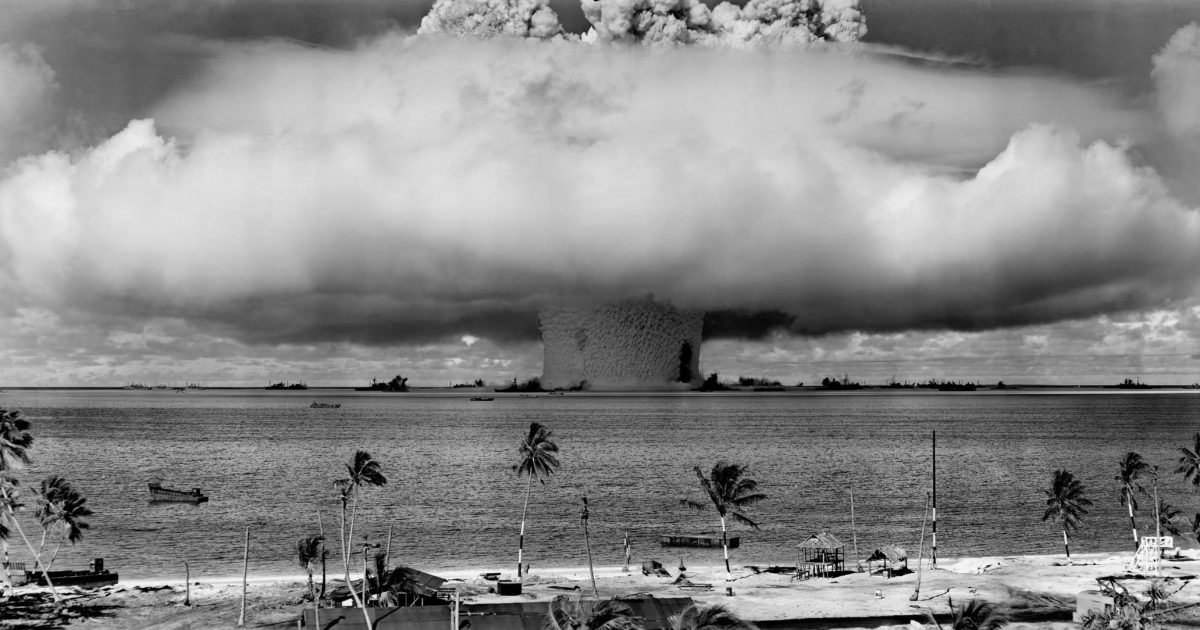 As for the Indy, after the tests, it was towed back to San Francisco for study and decontamination, towed out to sea a few years later when decontamination efforts had utterly failed, and scuttled. Working with Boeing and the Navy, NOAA located the ship in a half-mile of water near the Farallones Islands, about thirty miles from San Francisco.

As I’ve grown older, I keep wondering. What was the point of all the atomic tests? Increasingly, I suspect there was none. Just boys and their toys, blowing shit up because they can.