I have crazy ideas sometimes. Often, I can do absosmurfly nothing with those crazy ideas, like several years ago when I wrote about the Doctor Who/Uncle Scrooge crossover I would love to write.

The latest The Daily Post blogging prompt brought another one of those unusable ideas to mind. It’s not exactly an original idea; on Friday I saw another writer talk about it online. There’s clearly a market for the idea, but for reasons that will quickly become apparent executing it is simply impossible, and so I don’t feel that I’m giving anything away by talking about it.

Equestria, a land of friendship and peace.

Mars, a world of insane science and war.

When a Martian battlefleet invades Equestria and takes Applejack, Pinkie Pie, Fluttershy, Rainbow Dash, Rarity, and Twilight Sparkle prisoner for horrific experimentation, it falls to Doctor Whooves, Derpy, and DJ-Pon3 to enter the Martian battlecruiser, rescue their friends, and end the devastation of Equestria when Mars Attacks My Little Pony! 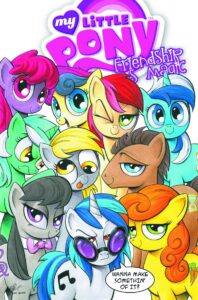 I should tell you right know that I don’t know jack about My Little Pony. Though I have never watched it, I write about it not-infrequently at work, so I’ve picked up a little over the years. I have a friend who used to attend My Little Pony conventions, years ago, before the Bronies. Some of my coworkers are deep into it. In short, I’d have resources if I were ever tapped to write such a story.

Just because IDW Publishing holds the comic book rights to both properties, there’s no way that Hasbro would ever let Equestria be invaded by comically homicidal Martians who go around vaporizing dogs just so they can laugh about it. Finding the right balance of the mismatched tone between the two properties would be a real challenge.

If I think about this more, I’ll actually work out the problems. I’m starting to see, for instance, that one of the Mane Six needs to escape capture by the Martians so she can join the Resistance. And there needs to be a role for the Princesses Celestia and Luna. Oh, and John De Lancie’s My Little Pony character is somehow tied into all of this.

But I don’t want to work out the problems in the idea and how to make it work. It’s an idea that’s best left as an idea. No one will ever have the opportunity to write this. And that’s probably for the best. 🙂