Over the past twenty-four hours, I’ve seen a number of people, some friends, some not, outraged by Hasbro’s Star Wars: The Force Awakens Monopoly set because it doesn’t include a player token for Rey.

For background on the story, see this article in The Guardian. For an example of the outrage, see this Gizmodo article.

The game includes four player tokens — Finn, Luke Skywalker, Kylo Ren, and Darth Vader. Of these four characters, one doesn’t appear in the film at all, and one is the Plot MacGuffin and a glorified cameo. Four tokens, no Rey, who, as people are pointing out, is the main character in Star Wars: The Force Awakens. It would be like making a Lord of the Rings Monopoly set and not including Frodo Baggins. 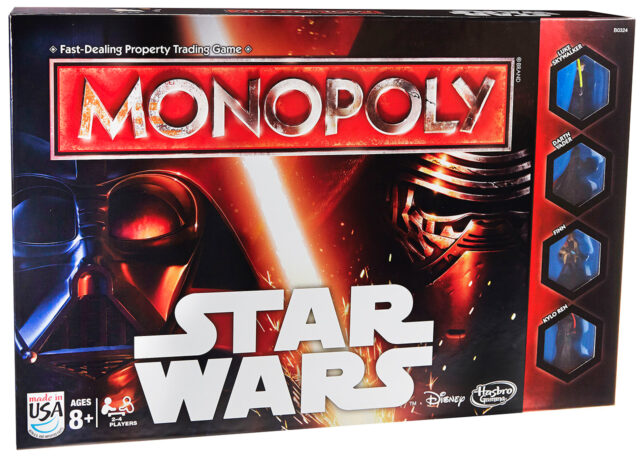 I may be off on detail or two, but that’s the set-up.

There are two reasons why I’m not especially outraged at Rey’s non-presence.

First, a Force Awakens game that includes a Darth Vader token isn’t trying to represent the characters of the film. Unless the token is Extra Crispy Darth Vader, which I doubt very much that it is.

Second, at the time that this game was being developed, approved, and manufactured, Rey was not being put forward by Disney/Lucasfilm as a character of any importance, so Hasbro made the game with the characters they were told were important. (And probably threw in Darth Vader because everyone loves Darth Vader.)

Working behind the scenes, to the extent that I do, Rey simply wasn’t there in the early merchandising materials as an important character. And I need to explain what that means.

Last summer, I had to write about Force Awakens merchandise with nothing to go on for a catalog that we put together at work for Force Friday. I know who Disney/Lucasfilm were putting forward as the important characters in July — Lead Hero, Lead Villain, Alien. There were products that were officially called things like “Lead Hero Action Figure 1” and “Alien Foam Weapon Roleplay.”

Those are the characters put forward by Disney/Lucasfilm as the film’s important characters.

Imagine writing about those and saying nothing at all. That’s why I get paid the little bucks.

Disney does this all the time. Look at Guardians of the Galaxy. When the film came out, you saw a lot of Star-Lord and Rocket Raccoon merchandise, but almost no Groot merchandise. Why? Because Disney saw Star-Lord and Rocket Raccoon as the film’s important and breakthrough characters and pushed those characters to the licensees. They didn’t push Groot. Then, when Groot exploded, they had to play catch-up. Eventually, there was Groot merchandise, but it took a little time. It was in shops by Christmas, months after the film was in theaters. The wheels of manufacturing don’t turn on a dime.

Hasbro wanted to hit the Christmas market with Star Wars: The Force Awakens merchandise. Hasbro could have had more Monopoly tokens in the box — don’t Monopoly sets traditionally have six? — and included Rey. It’s unfortunate that their Monopoly set doesn’t include Rey, but they were working this summer with the information they had, which I’ve no doubt wasn’t much more than the information I had when I had to write about Alien Foam Weapon Roleplay. (That’s the Chewbacca Wookie Bowcaster, by the way. I couldn’t even mention those three words.) As I said, merchandise has a lead time. These Monopoly sets weren’t made two days after the film came out.

I don’t know if Disney/Lucasfilm thought Rey wasn’t as important as Finn or if they decided to downplay Rey in the licensing so as to hide her role in the film. I don’t know enough to say one way or the other. I prefer to think it’s the latter, but the former is just as valid a possibility.

My hunch is, we will see Rey is more merchandise in the months ahead. The licensees like Hasbro don’t like to leave money on the table. But they also didn’t know they were leaving money on the table by focusing on characters other than Rey, all because Disney/Lucasfilm didn’t tell them to focus on Rey.

If Hasbro were smart, they would set up a program where a buyer of the game could send in the UPC code from the box and a small handling fee to receive a Rey Monopoly token. Or, they could sell an expansion set for the game with more game tokens and more cards for the game. Or, the industrious Monopoly player could use a Disney Infinity figure as their Rey game token.

I’m not defending or excusing Rey’s absence from the Monopoly set. (I honestly don’t have an opinion one way or the other; Monopoly isn’t my thing.) I’m explaining how and why this happened — limited (or constrained) information, long lead times, and hitting market windows. Star Wars: The Force Awakens Monopoly may not be the product aggrieved consumers want, but it’s the product Hasbro could make under the constraints they had to work under.

One thought on “Star Wars Monopoly and the Merchandising of Rey”