I remember — or I think I remember — Carl Sagan saying in the original Cosmos, “We are made of starstuff.”

That’s true. We are. The Big Bang produced a lot of plasma and a lot of hydrogren. The hydrogen came together and formed the first stars. As stars burn hydrogen, they fuse it into helium. When stars explode, the hydrogen and helium fuses into heavier elements. Everything that you’re made of, every plant you see growing, every rock, every pebble, the air that you breathe, the ocean that laps at the shore — billions of years ago, it was once the fuel for a star.

Astronomers have spotted the biggest star explosion ever. 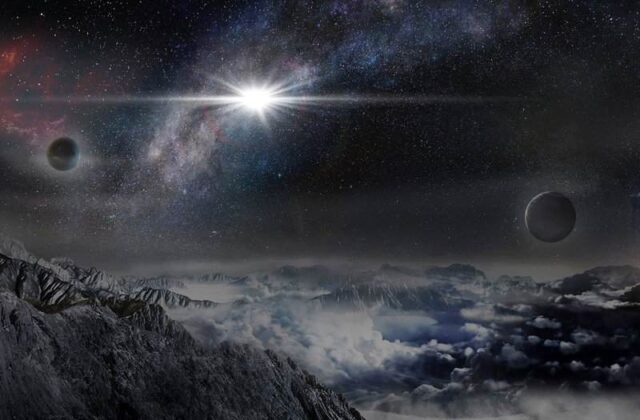 In some distant galaxy, this explosion will create the building materials for planets. Perhaps one of those planets could have the conditions necessary for the development of life. In the death throes of a star, life could be the result.

ASASSN-15lh: Astronomers find the brightest known exploding star in the Universe – 3.8 billion light-years away, a star exploded in the brightest supernova ever seen. When this star (which may only be about 10 miles across) exploded, Earth was only 700 million years old. “Supernova or exploding stars have been documented for more than 2,000 years of human history, but very bright or ‘superluminous’ supernovae are a relatively recent discovery made over the past couple of decades. ASASSN-15lh is so bright, however, that it falls off the scale even for superluminous supernovae. It would take for instance the Sun to emit light for 90 billion years — 50 times the age of the Universe — to match the emissions given off by this one explosion.” The Independent

Record-Busting Star Explosion Baffles Sky Watchers – Discovered in June by the All-Sky Automated Survey for Supernovae, ASASSN-15lh is 570 billion times brighter than the sun. Harvard astronomer Elo Berger: “The event itself seems to be coming from the center of the galaxy, and so I think that raises the possibility that it could be related to the supermassive black hole that resides in the center of a galaxy like that. And perhaps it is due to a very different mechanism than the explosion of a star.” NPR

What if History’s Brightest Supernova Exploded In Earth’s Backyard? – I read an article a few years ago to the effect that if Alpha Centauri (the closest star to our sun) went nova, life on Earth is basically done for. Now, let’s imagine what would happen if ASASSN-15lh exploded in our galactic backyard. Well, it wouldn’t be good. Even from 900 light-years away, an explosion the side of ASASSN-15lh could trigger a massive extinction event. The neutrino wavefront, even at that distance, would strip bare the Earth’s ozone layer and fry the electronics our civilization relies upon. The Atlantic

This supernova happened almost four billion years ago. Life on Earth, such as it was, was still single-celled. The moon was much closer to the Earth (and there’s a possibility that Earth may have had a second moon at the time.) Earth and the moon were being pelted by rocks in the Late Heavy Bombardment. The gas giants were still sorting themselves out in the outer solar system; Neptune may have been closer to the Sun than Uranus, and there may have been a third ice giant as well.

In short, this happened a long time ago. We’re just seeing it now, because it takes a long time for light to travel to Earth from the cosmic distances of deep space. If we could be in that distant galaxy now, we might see an impressive nebula. We might see a stellar birthing factory, a giant cloud of gas and dust where new stars are born. There might even be new solar systems, filled with planets, born from the wreckage of this massive explosion.

Or there might not be anything at all worth seeing — pulsars, shattered planets, irradiated solar systems filled with dead planets.

The universe is immense, and even though the stars seems to be unchanging from year to year, the truth is, the stars are as lively and chaotic as anything in nature. The discovery of ASASSN-15lh reminds us of that.