I made a valiant effort at listening to it. It was difficult. Palin’s voice was a high-pitched screech with the speed and fury of a gale behind it, a freestyle ramble of slights, real and imagined by the “Establishment” against the true conservativism. I wondered, at times, is this how fascism begins? Have we finally reached the point where Europe was eighty years ago? As Palin lashed out at those she believed had wronged the United States and the conservative vision, I had to wonder. 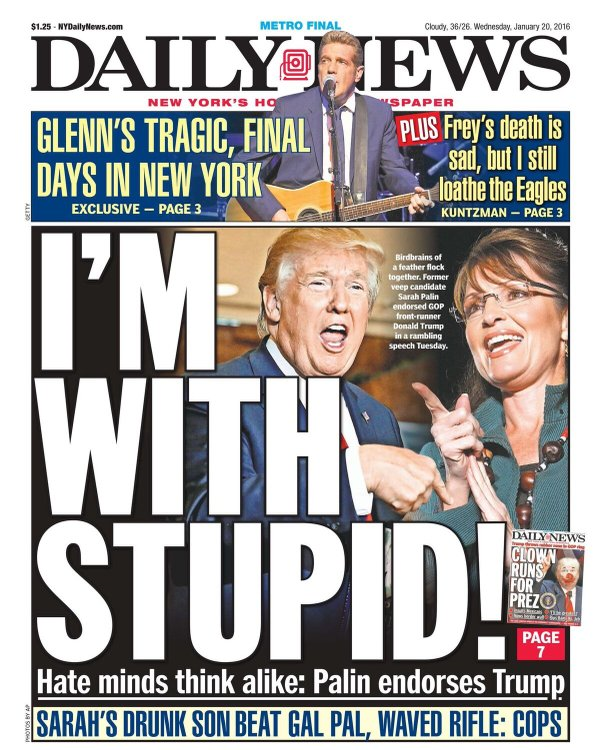 Here’s a round-up of links on Palin’s endorsement yesterday that share some of the same misgivings about the speech, about Palin and Trump’s ability to tap into the resentments many feel toward the elites, the government, the other.

Sarah Palin Endorses Donald Trump – Peter Beinart: “In Trump’s campaign, Palin and company see their supposed suffering too. The difference is that Trump’s supporters remember a day, before ‘political correctness,’ when they were on top. And so they see Trump as more than just the manifestation of their victimhood. They seem him as the instrument of their revenge.” Also worth reading from The Atlantic, David Frum’s “Trump-Palin: An Alliance of the Aggrieved“ The Atlantic

Hot Mess Endorses Dumpster Fire – “On Tuesday night, Sarah Palin stepped foot on stage at an Iowa rally to endorse Donald Trump. What followed was 20-odd minutes of what I can only describe as post-apocalyptic poetry.”

Palin endorses Trump for president – “On Tuesday, Sarah Palin said Donald Trump was the only candidate who could take on the establishment. Will her endorsement make a big difference for Trump? Lawrence discusses with David Frum, Ezra Klein, and Sam Stein.” The Last Word with Lawrence O’Donnell — MSNBC

The 2016 GOP is the Party of Palin – Josh Marshall: “Let’s put it starkly. Whose Republican party is this? McCain’s? Romney’s? Bush’s? Boehner’s? Ryan’s? There’s little question that the 2016 GOP is the party of Sarah Palin. Donald Trump is simply the successor who is bringing what she started to fruition — the Joshua to her Moses, the Umar to her Muhammad. This is not simply a commentary on the colorful, antic quality of this political cycle. It’s rooted in the same basic themes and beliefs: a mix of grievance and aggression, sharp tongued impatience with cosmopolitan thinking and ‘political correctness’, paeans to the righteous resentment of hard-working white folk, and all packaged in a media savvy gift for gab.” Talking Points Memo

The Inevitability of Palin’s Endorsement of Trump – Ed Kilgore: “Sarah Palin’s decision to endorse Donald Trump for president makes perfect sense when you think about what she has distinctively represented in the Republican Party. Yes, she’s a “conservative” in the sense of standing for maximum confrontation with Democrats and constantly accusing the party Establishment of acts of betrayal. But no, there’s nothing particularly ideological — or, for that matter, intellectual — about her approach to politics or issues. She represents almost perfectly the passion and resentment of grassroots cultural-issues activists.” New York Magazine

How Sarah Palin paved the way for Donald Trump’s noxious populism – Heather Digby Parton: “It was startling to hear the two political celebrities back to back and realize how perfectly they speak the same strange, rambling, emotionally compelling nonsense language. It’s a style that sounds and feels like talk radio; the cadence is the same type of conversational ranting, which explains the sense of identification and familiarity their fans feel toward them. But when you listen to the words (to the extent they make any sense) you realize it isn’t the same at all. They aren’t talking about conservatism. They’re talking about something else entirely.” Salon

This is right-wing America: Palin, Trump speak directly to the politics of hate and resentment that drives conservatism – Amanda Marcotte: “That’s what has been driving the conservative movement for decades: Fear of desegregation, fear of feminism, fear of LGBT acceptance, fear of an empowered labor force. Republicans have been able to mold these fears into seemingly less repugnant ideologies like ‘small government’ for a long time, but the system is collapsing as of late. That’s why politicians like Trump and Palin, who don’t even try to graft a coherent-sounding ideology over the politics of resentment, are doing so well. But just because the conservative movement is being more honest about who they are these days doesn’t mean that this isn’t who they’ve always been.” Salon

Apocalypse now: Sarah Palin’s bizarre Trump endorsement analyzed – Dave Schilling: “Has the world known a greater horror than what it witnessed on Tuesday when Sarah Palin endorsed Donald Trump for president of the United States? I don’t mean physical horror, like murders, genocide or sexual violence. I mean lingering existential dread, the kind of sick feeling that burns the inside of your stomach like you just drank a pint glass full of battery acid. We looked directly into the eternal abyss and were left forever changed by it.” The Guardian

It’s worth noting, as a backdrop, that while Palin was prepping for her trip to Iowa, her son Track was being arrested for a drunken, armed, and violent assault on his girlfriend. Rather than deal with issues closer to home, she fled to Iowa to screech an endorsement of Donald Trump.

A part of me wants to believe that we have, at last, with this endorsement by Palin, reached Peak Trump. His speech at Liberty University, where he’s taken mockery from Christians for referring to 2 Corinthians as “Two Corinthians” rather than “Second Corinthians” (which, though I don’t see the issue, apparently shows that he’s not an authentic Christian, so I’m told). Now, bringing a political has-been into his campaign and giving her a platform. The bloom is off the rose, my heart wants to say. Trump has maxed out. He can go no further.

But, Trump will undoubtedly surprise me. Us. All of us. He always does.