In the wake of the Charleston shootings, the Baltimore Sun has an article today about removing Confederate symbols from Maryland’s license plates (which is now possible thanks to a Supreme Court ruling last week that allowed Texas to ban it) and renaming Robert E. Lee Park in Baltimore.

The article doesn’t address the most prominent Confederate symbol in Maryland, though. And it’s a symbol that anyone in Maryland probably sees every day.

Prior to the Civil War, Maryland did not have an official flag. It had some unofficial flags, like the Calvert arms (the black and gold design) and a blue flag with the state’s coat of arms. Fifteen years after the Civil War, the state adopted a flag — the familiar quartering with the the black and gold Calvert arms and the red and white Crossland banner. What people knew then — and generally don’t know now — is that the two flags represented the two sides of the Civil War. 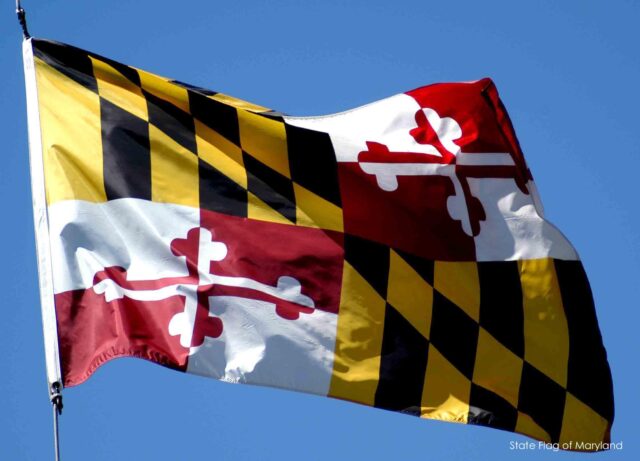 The point of this is, Maryland’s state flag incorporates a Confederate symbol as blatantly as Mississippi’s state flag does now. The Crossland banner may not be as familiar as the battle flag, but Confederates fought and died under it. Maryland’s flag is slightly more subtle in its origins than Georgia’s flag, which is a modified version of the Stars and Bars, the first official Confederate flag; the only difference is that we’ve forgotten what the Crossland banner was used for and why it’s there.

Maryland’s flag is lovely, but it does have some dark history to it. Perhaps, because that history has been largely forgotten Maryland’s flag really is innocuous. Still, if Maryland’s politicians want to take a stand against Maryland’s Confederate symbols and the state’s Civil War legacy, they also need to grapple with Maryland’s state flag — or at least discuss it.