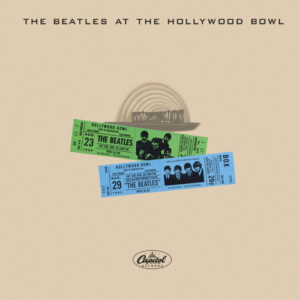 I was never optimistic about a CD release of the Beatles’ Live at the Hollywood Bowl album for a number of reasons — the Beatles themselves weren’t fans of it (they didn’t have any right to veto the release at the time), and George Martin wasn’t happy with the sound quality of the recordings. This September, in conjunction with a new Ron Howard documentary on the Beatles’ touring years, Live at the Hollywood Bowl will see its first official CD release.

The album, as released in 1977, was something of a hodge-podge of recordings from 1964 and 1965, mixed together as though they were a single performance, to cover the deficiencies of the three-track recordings. The remastered CD version is essentially an extension of what George Martin did with the recordings in 1977, with four additional tracks. It’s not ideal, imho — that would be the complete Hollywood Bowl recordings, flaws and all, in the proper sequence, without the 1964 and 1965 concerts mixed together — but it’s probably the best we could hope for.

I’ll be glad to add this to my Beatles collection. Now, as pointless as they are, I’d love for releases of Rock ‘n’ Roll Music, Love Songs, Ballads, and Reel Music. And “The Beatles’ Movie Medley,” too, preferably a Giles Martin recreation that goes back to the original master tapes that were used to create it. There are still things that, as a Beatles fan, I would love to hear and have in my collection.