Friday afternoon I decided to attend the Celtic Craic Music Fest in Harrisburg on Saturday.

For the record, this is not work avoidance on my part. The self-appraisal was dropped on me on Thursday to, frankly, my complete and utter surprise. Scuttlebutt in the office was that reviews weren’t being done this year due to a number of factors, including “uncertainty” over the new overtime rules. Between that and the Crunch, I wasn’t in the frame of mind to think about the self-appraisal, and this is one that requires some thought. This year I’ve been asked a question that requires thought — “Where do you see yourself professionally in five years?” — and it’s the unstated assumptions of the question’s premise that are tripping me up. This isn’t a simple, “I did this, I did that”; I need to grapple with the premise so I can answer the question.

An Irish Outing in Annapolis 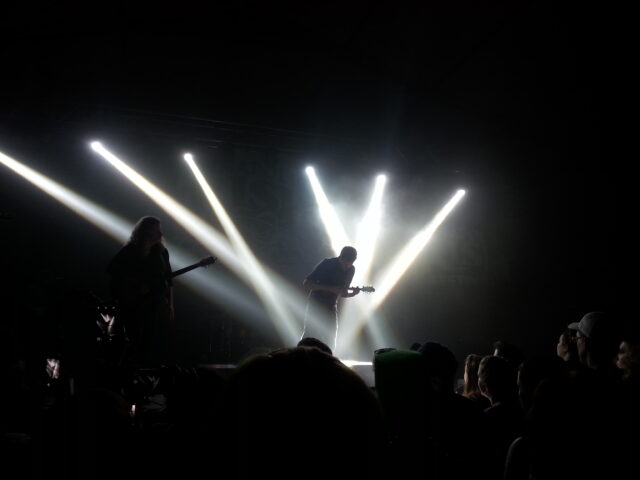 I feel that I’ve been living in a bubble the last month, but work, deadlines, and work deadlines will do that to a person. Yesterday was an escape from that bubble — the fifth annual Annapolis Irish Festival was held at the Anne Arundel County Fairgrounds. I first went in…

Given that, chilling at a music festival was an enticing prospect. I could unwind, take my mind off work, enjoy some music, spend some time in the sunshine.

There were two options for tickets — a fifteen dollar General Admission ticket or a twenty dollar VIP ticket. The difference? The VIP ticket came with two beers! Usually when I go to a Celtic festival, I’ll have two, maybe three beers. Beer at these gigs is stupidly expensive. At the last Shamrock Fest I went to, I believe the beer was an eye-popping eight dollars each. At the Annapolis Irish Festival in July, depending on what you wanted, the beer ran five or six dollars each. Five more dollars for an admission ticket that came with two beers, then, was perfect. It was the ticket made for me. 🙂

The festival was at the Harrisburg Postal Fairgrounds and, having absosmurfly no idea where that was, I put my faith in Google Navigate. This almost proved to be my doom. The first leg of the trip went smoothly; straight up 83 as I’d have done for a Harrisburg Senators game. Off onto 2nd Street into downtown Harrisburg. There’s where things went all wonkus.

I have no idea where I ended up. At one point I stopped in a hospital parking lot to try and figure out where I was and where I needed to go. At another point, I stopped at a Wells Fargo along Front Street and rebooted my phone.

And then the GPS signal cut out again just as I was approaching 81 on Front Street. So I ended up on 81, which I wasn’t supposed to have done, because I made a best guess at what I was supposed to do because that seemed right, only that was all wrong and I shouldn’t have done that.

Eventually Google Navigate and I were back in sync. I needed to continue north on Front Street along the Susquehanna, and it told me I needed to turn onto Roberts Valley Road when I was literally right there. (The Beetle handled that very well. I was impressed.) Two miles up a narrow, windy road, and I was there!

There was a stage (made out of a flatbed trailer) out the field for the Celtic rock bands.

There was a row of merchandise vendors.

There was a children’s play area.

There was also the fairground’s picnic pavillion where the traditional music bands played and a local fire company sold hamburgers and hot dogs, but I don’t have any external photos of that.

When I arrived, the Backseat Hooligans were playing.

After their set finished, I went for my first Guinness of the day. There, in line, I met Phil Duckworth of Paddy Rock Radio. He noticed the t-shirt I was wearing, a green Tossers t-shirt. “Is that from the pre-order?” he asked me. It was, and then we started to talk, and it was only a few moments into the conversation that I realized who I was speaking with.

Then another person in line noticed my Tossers t-shirt and began to gush about the band. “Not to take anything away from the Dropkick Murphys, but the Tossers are the best Celtic rock band working today.”

Obviously I picked the right attire. My Celtic Batman t-shirt from Graphitti Designs would have been great, but it’s also black, and it was a blooming hot day more suited to July than September and would have been uncomfortable in the heat.

Playing on the Trad Stage was Wyndfall.

I bought a cheeseburger from the local fire company for lunch. It was fine.

After this, the Lochiel Emerald Society Pipes and Drums, a pipes and drums company from Harrisburg made of local police and firefighters, played a brief set on the fairgrounds.

Yes, this drummer is a pro. He can drum with his Guinness on his drumskin!

After this, there were joined by several other pipers for a rendition of “Amazing Grace” in honor of the 15th-anniversary of 9-11.

Mid-afternoon was something of a lull. There were dance companies on the Trad Stage. It was a good time to check out the vendors. I also sat down, pulled out my notebook, and jotted down random scribblings, ironically some work-related.

I also had a sunscreen incident. I had put on sunscreen before I left for the festival — a good, precautionary move — and mid-afternoon, my sweat had mingled with the sunscreen and got into one of my eyes. The pain was immense. Tears were pouring out of both eyes, I could barely see. I grabbed some napkins from the fire company, and dabbed my eyes to get as much of the mixture of sweat, tears, and sunscreen out as I could. It worked, because within ten minutes I felt massively better.

At five, the Ogham Stones, a Celtic rock band from Lancaster, took the stage.

I’d heard of the Ogham Stones, but I’d never seen them in action. Of the acts I didn’t know previously, they were honestly the act I was most curious about.

They played a mix of originals and covers.

After the set, I bought their CD and a t-shirt; it was a bundle for twenty dollars, and I need more green t-shirts in my life. I’ve really tried to cut back, but I still have far too many black t-shirts.

For what it’s worth, I also bought the festival t-shirt. I don’t normally buy such things, but I went, “Oh, why not?” Plus, it was a white t-shirt, and as I said, or implied at any rate, I need less black in my casual wardrobe. 🙂

On the Trad Stage next was Down by the Glenside.

Look at the size of that stage. They have six people up there! Six!

I’m terrible with estimating crowds, but I’ll attempt it anyway. The crowd for the Celtic Craic was probably around 400 people total, including vendors and music acts. There was a nice vibe to the place. The crowd was engaged and enthusiastic. But it was also relaxed. You could pause and just take it all in.

The Bastard Bearded Irishmen were supposed to be the 7 o’clock act, but they had to cancel for the best of reasons — the wife of one of the musicians went into labor. The Kilmaine Saints, Harrisburg’s Celtic rock band, took their place.

I’ve seen the Kilmaine Saints a few times before; they’ve been at Shamrock Fest several times, and I feel like I saw them at the Annapolis Irish Fest one year. They’re an exciting live band. They crowdfunded two of their albums (one a studio album, one a live album), and I contributed to both. I like their work, they have a great sound.

After that set I left for home. The Kilmaine Saints were going to do a second set at 9-ish, but the sun had gone down and the fairgrounds had no lights. In fact, finding my Beetle in the field proved extraordinarily difficult as did getting out of the field back to Roberts Valley Road. Some of the parking was haphazard which made what looked to be a route out nothing of the sort. And then I had to navigate around a motorcycle that was parked in the middle of the gravel driveway.

Once I was back on Front Street, though, getting home was a breeze. Straight down Front Street into Harrisburg, pick up 83 there (as I would leaving a Senators game), and to York.

FNB Field, the home of the Senators on City Island, was illuminated in red, white, and blue ribbon lights, presumably for Patriot’s Day.

The trip home was uneventful. I put the Ogham Stones CD in the CD player, listened to that, then switched over to the Nationals game on a Harrisburg sports radio station for the rest of the trip.

It was a pleasant outing, and I’m glad I went.

I’m still no closer to grappling with my self-appraisal than I was on Friday afternoon. C’est la vie.