Last year Mark Osborne, the director of Kung Fu Panda, released an animated adaptation of Antoine de Saint-Exupéry’s novella, The Little Prince. The film had been picked up for distribution in the United States by Paramount for earlier in the year. I had seen Paramount’s trailer for the film, and I was captivated by it. This, I said to myself, is a film I need to see.

Then, just before its release Paramount cancelled plans to release the film. It was subsequently picked up for online streaming by Netflix. Then I sort of forgot about the film until, just a few weeks ago at work, we relisted the graphic novel adaptation of The Little Prince by Joann Sfar in the catalog, and I decided I wanted to see the film. I went to Amazon Canada and bought the Canadian Blu-Ray/DVD release — the exchange rate was more than favorable — and a few days ago it arrived. 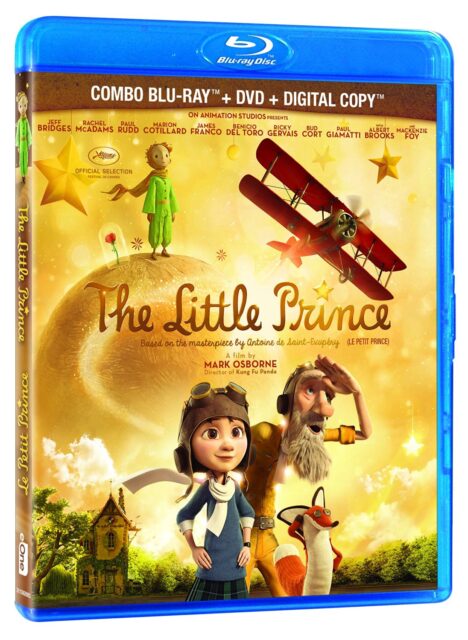 Last night I watched the film.

The film isn’t a straightforward adaptation of de Saint-Exupéry’s novella. About half of the novella makes it in there (a few of the asteroids the Prince visits after he leaves his asteroid are skipped in the Aviator’s narrative; I’d have liked to see the Geographer), and it wraps the novella adaptation in a sequel to the novella in which the Aviator tells the story of his plane crash in the desert and his encounter with the Little Prince to a Little Girl whose mother has planned out her life and is driving her to be a grown up. The two stories have very different textures — the original novella done in stop-motion animated, the “sequel” in a Pixar-like CGI style — tied together with Jeff Bridges’ sonorous yet whimsical voice as the Aviator.

There are a couple of things happening in The Little Prince. On the surface it’s about the Little Girl learning that she shouldn’t be in a hurry to be grown up. There’s also a thread about how children understand death and the metaphors that adults use to explain it to them. Deeper still and fundamentally, it’s a story about stories, the way stories give meaning to our lives, how stories build connections between people, the way stories shape our understanding of and approach to the world, what happens to us when we stop telling stories and embracing them. It’s almost Gaiman-esque in that way; I could see an adaptation of Neil Gaiman’s Narnia story, “The Problem of Susan,” as being very similar to this.

The different textures of the two parts of the film raise the question of the reality of the story told in a visual way — presuming that the CGI is “real,” then is the story of the Little Prince as “real” as the story of the Little Girl, or is the story of the Little Prince just a story, imagined and told by an old man to a lonely little girl? This is where I think the third act could have made different creative choices, either by blending the two visual metaphors (the stop-motion style of the novella adaptation, the CGI style of the “sequel”) or by adopting a third visual style as the film’s story leaves the Aviator’s story and the real world story for the Little Girl’s story. The third act could have been more ambiguous, essentially, but even without that ambiguity I’ve formed an opinion as to the reality of its events.

The film is lovely, and the stop-motion animation is gorgeous. There are some interesting visual touches — I particularly liked the way that the Little Girl’s city, when viewed top down, resembled a microchip — and the more I think about it, the more I see how the real world is caricatured and grotesque in the way that a child would see the adult world. That creates some parallelism between the Little Prince’s journey and the Little Girl’s experience — they don’t understand the people they meet and their behavior. The film’s emotional arc is heavier than one might expect, but it has a great deal of resonance as well.

The Little Prince is a sad, bittersweet, and moving film. There are good and important messages in the film about the importance of love and what matters in life isn’t always (or ever) what we think (or have been conditioned to think) matters. This is a film I’ll think about for some time to come.