I went to Washington today for the playoff game between the Washington Nationals and the Los Angeles Dodgers. As I did two years ago for the Nationals-Giants series, I chose the second home game, which, again like two years ago, turned out to be game two of the National League Division Series.

The game wasn’t played today due to rain. It will be played, instead, tomorrow afternoon at 1 o’clock.

I knew there was a chance, when I left my apartment at 8:30 this morning, that the game would be postponed. It wasn’t raining here in Pennsylvania, but I looked at Washington’s weather forecasts and saw that it was raining and was supposed to rain through early evening. I thought there was a chance that the game would be postponed, but only by a few hours. So I took my notebook with me; perhaps in the slack hours I would have some time to write.

Some might say, “Wasn’t that a wasted trip?” No, not at all. Yes, I drove down to DC from York, Pennsylvania (it’s about an hour and fifteen minutes from York to the Greenbelt Metro Station), took the Metro in, puttered around on the National Mall and environs in the rain, went to the stadium, left the stadium, and got home about ten hours later. No, there wasn’t a baseball game. But I had a nice time.

When I go to DC, I invariably hop off the Metro at Navy-Archives. For one thing, there’s a Wells Fargo right there (and I wanted to stop at an ATM machine so I’d have some cash). But mainly, this is where the Navy Memorial is. It’s a plaza with fountains and bas reliefs and a statue and ship masts with semaphore flags. It’s a nice, quiet spot. It’s also convenient to the National Mall; you’re two blocks away on Pennsylvania Avenue.

The bas reliefs are fascinating. This one is John Paul Jones, father of the United States Navy.

This one is the Astronaut Recovery Missions, depicting the recovery of one of the Mercury capsules. Obviously not Gus Grissom’s.

From there, I went over to the Mall. Parts of Pennsylvania Avenue were closed of for the Taste of DC festival. I went to the National Gallery of Art first.

The Capitol Building was striking in the rain.

It was the sort of scene a French expressionist painter would have loved — a gloomy sky, rain-slickened sidewalks and street, passers-by with their umbrellas in the rain, the prominent building.

So, I tried the picture in Prisma when I got home. This was with the “Hunter” filter. 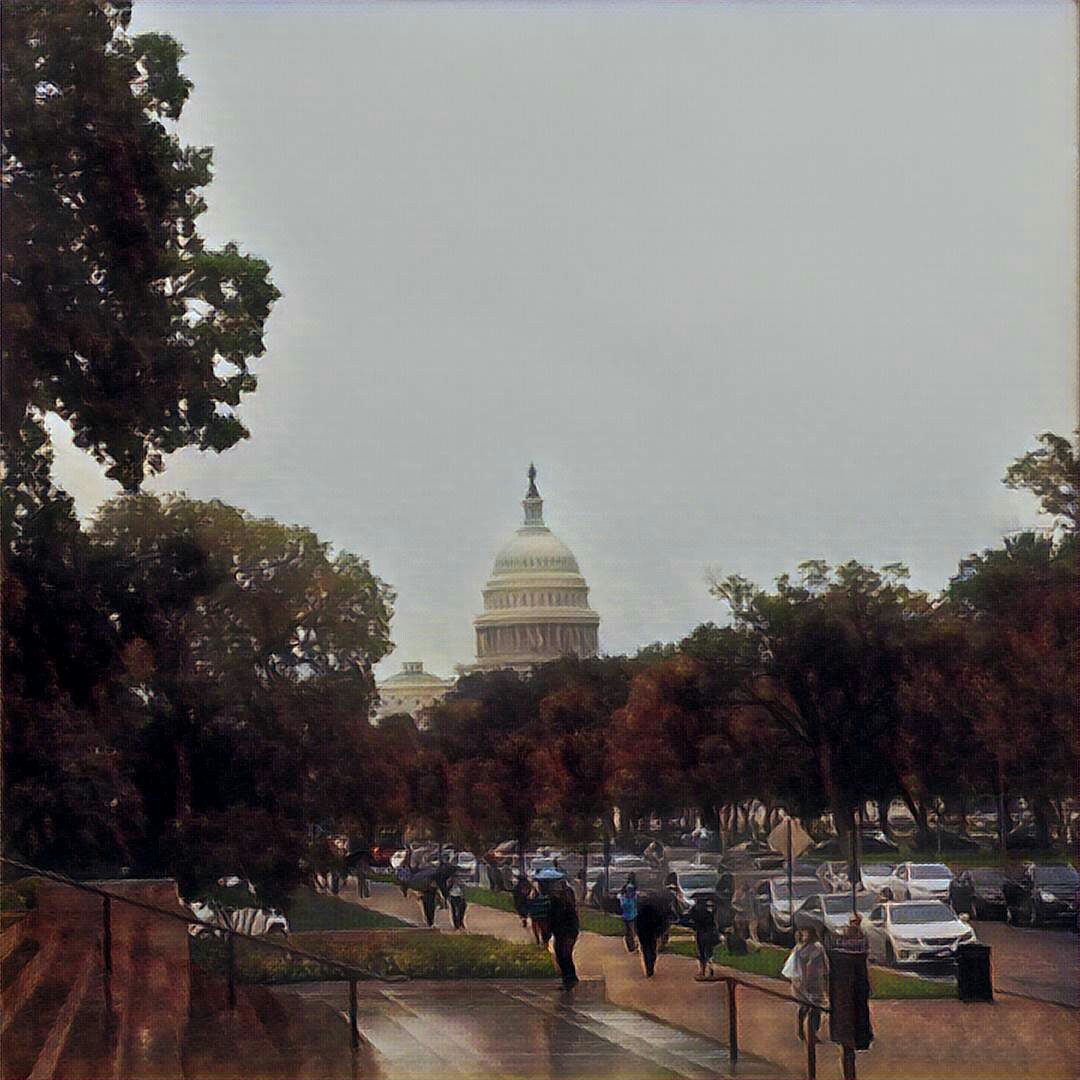 I was wearing a red Nationals hoodie — the one I bought at the playoff game two years ago, to be precise — and one of the security guards, a tall black man, thin, about fifty, stopped me in the exhibition of Early Federal Period furniture pieces.

He looked at the Curly W on the front and shook his head. “You can put that back in the closet. It’s over.”

“Look, if we don’t win tonight and we go to Los Angeles down two games and it comes down to Gio, then it’s over. I don’t have faith in Gio in that situation.”

In another gallery, this one an exhibition of photography from the Corcorran, another security guard stopped me, again because of my Nationals hoodie. We talked about Friday night’s game, and he wanted to know who was scheduled to pitch.

“Roark?” he said, mispronouncing the name. “Roark will do it. Roark will win it.”

I think he felt better after talking to me.

In an upstairs gallery, I saw this unique piece.

It was called, if memory serves, “The Divine Household.” It depicts Mary and Joseph (I’m assuming that’s the man behind Mary) and the infant Jesus. I was struck by how much the sculpted figures resembled Pixar characters; they’re all deformed from the human norm in similar ways.

In another gallery, there was this piece.

This is, as Spock says in Star Trek VI, “a depiction from ancient Earth mythology, the expulsion from paradise.” I would call this, “Adam Throws Eve Under the Bus.” Just look at the expression on Adam’s face and his body language. “God, look at what I have to deal with here. What did you expect? You can’t possibly blame me for this.” Eve isn’t exactly covering herself in glory, either; she’s pointing at the snake and blaming it. And knowing what follows this moment — the “expulsion from paradise” for trivial reasons — God doesn’t come out of this story looking good, either.

Also note the lion in the lower right hand corner. Medieval painters didn’t have any experience with lions, which is why they typically resemble super-huge (and super-freaky) house cats.

I walked much of the length of the Mall. The rain was gentle, and it was rather warm. Certainly much warmer than it looked.

There were massive lines to get in other museums; I’d estimate the line to get into Natural History at 150 people.

And so it happened that, as I neared the Washington Monument, I had a better idea. I would go in search of Swampoodle Grounds.

Swampoodle Grounds, as I wrote in April, was Washington’s baseball field in the 1880s. The team called themselves the Nationals, Hall of Famer Connie Mack played for them, their field stood a few blocks from the Capitol Building at the edge of Swampoodle, Washington’s Irish neighborhood.

So, back up Constitution Avenue I went…

I stopped at the Robert Taft Memorial.

I think it’s a little weird that Taft, “Mr. Republican,” has a memorial.

But it made me think about Taft and how he is, very much, the founding father of the modern Republican Party. Taft set out the path that Republicans, from Goldwater to Reagan to George W. Bush to Paul Ryan have trod — roll back the New Deal and the scale of the federal government — with one crucial difference, isolationism. The jingoism and military adventurism of the modern Republican Party would have been anathema to Taft. He’d certainly be on board with Paul Ryan’s fiscal roadmap in social spending — he’d scale back Social Security and Medicare and repeal the Affordable Care Act &mdsah but he’d have no place for an aggressive foreign policy. In that sense, Taft probably resembles, this political cycle, anyway, Gary Johnson more than anyone, except more serious.

As I continued up the street toward Union Station, I turned around and took a picture of the Capitol Building. As best I can tell, I matched — or, at the very least, came close enough for government work — the angle of the original photo. Remember, I see this photo every day. I’ve studied it. I’ve even had it printed out as an 8 X 10 and put in a frame that hangs in my apartment. I love that picture; it combines my love of baseball, history, and politics in a single image.

Unfortunately, when I reached Union Station, there were trees in the way.

That said, I felt confident that I was within five hundred feet of where that 140 picture of the Capitol was taken.

I roamed around Union Station until I was bored, had lunch in the food court and did some writing in my notebook, and the caught the Metro to Nationals Park.

It was raining and, unsurprisingly, the tarp was on the field.

There was some entertainment! A man was playing an electric baseball bat.

It was, in actuality, an electric fiddle in the shape of a baseball bat. Viv Stanshall would have been impressed, and he’d have wanted the baseball bat fiddler for the Bonzo Dog Doo-Dah Band, no doubt.

There was also a nice memorial to commemorate the Navy Yard shooting.

With nothing to do, I wandered around Nationals Park.

I went up to the 300-level, which I’d never done before. From there, I had a lovely view of the Washington Monument shrouded in mist.

More importantly, I’d never seen the park from this view.

This wasn’t a bad location at all.

As I made my way around the 300-level concourse, the Capitol dome came into view.

I may not have succeeded in capturing the modern view from Swampoodle Grounds, but I managed the equivalent feat from Nationals Park.

There was also a nice view of the Anacostia River.

It was serene. There weren’t a lot of people, so I stood there on the ramp and watched the rain splash in the river and the waves churned up in the wind. In my review at work I was told I needed to be “content,” and, with a light rain falling on me, I felt content as I looked out over the Anacostia.

Sensing that the rain seemed to be lightening, I went down to the main concourse and bought myself a frozen margarita tube. I took the escalator up to the 200-level behind the scoreboard, tried to figure out where my seat was…

…and the Nationals announced that the game had been postponed due to the inclement weather.

“Well,” I said. I had the margarita tube, I couldn’t possibly let it go to waste.

People streamed out of the gates. I lingered, and I wasn’t the only one.

I stopped to watch some of the Dodgers toss a ball around.

As I left Nationals Park through the Center Field Gate, a man was trying to unload his tickets for the game. I guess he had other plans for tomorrow.

In the Metro station, I took the second Green Line train — the first was stopping at Mt. Vernon Square, and I needed to go all the way to Greenbelt — and, while I waited for the train, I read some of Jake Russell’s 100 Things Nationals Fans Should Know & Do Before They Die, which I’d picked up in the team store after I arrived at Nationals Park.

A Hispanic man sat next to me on the train. He saw my Nationals bag and wanted to know if they’d won the game. I explained that the game was postponed on account of rain, and we chatted for about fifteen minutes. He likes the Nationals, but he’s only been to Nationals Park once. He likes the football team more.

I know there are people who like to say that Washington isn’t a baseball town — I’m looking at you, Peter Angelos — but my experience today tells me otherwise. I had serious baseball conversations with three total strangers, If that’s not a testament to the interest Washington has in its team, then I don’t know what is.

The drive home was smooth, and I was back in Pennsylvania by six. I didn’t even feel any effects from the frozen margarita tube. 🙂

My legs are sore, my back aches, I’m tired. I’ll be back in DC tomorrow. I think I’ll leave again about eight o’clock, take the Metro from Greenbelt to Potomac Avenue, and walk over to Congressional Cemetery for some explorations before the game. Visit the graves of my great-great-grandfather and his sister-in-law, find the grave of my great-grandfather’s half-brother, that sort of thing. And then walk down to the stadium.

Today wasn’t a waste. Not at all.