If you were to ask a Chicago Cubs fan who the Cubs’ rival is, most Cubs fans would say it’s the St. Louis Cardinals. There’s some truth to that, especially in the last fifteen years or so with the division realignments and the unbalanced schedule, but that wasn’t always true.

If you go back into the dim mists of time, baseball’s greatest rivalry was between the Chicago Cubs and the New York Giants. From about 1905 to about 1920, the Giants and the Cubs were the kind of rivalry we’d today liken to Yankees-Red Sox.

Tomorrow, that ancient rivalry is rekindled. The Cubs and the Giants will play for postseason glory. They met in the postseason once before, in 1989’s National League playoffs, but this year’s National League Division Series will have a pitching match-up to rival the glory days of the Cubs-Giants rivalry when Jake Arrieta matches with Madison Bumgarner in game 3 in San Francisco. My mind drifts immediately to the great match-ups between the Cubs’ Mordecai Peter Centennial Brown, popularly known as Three-Finger Brown, and the Giants’ Christian Gentleman himself, Christy Mathewson.

We’re talking about an era of wooden ballparks, insane dimensions, expansive foul ground, and standing room only crowds in the outfield depths. We’re talking about Baseball’s Sad Lexicon (“Tinker to Evers to Chance”) and Merkle’s Boner. Ring Lardner was a sportswriter in Chicago in those days; he wouldn’t begin to write baseball fiction for a few years yet.

The Cubs played in West Side Park; what would become Wrigley Field wouldn’t be built until 1914 for the Chicago Whales of the short-lived Federal League. West Side Park had a double-decked wooden grandstand and sat about 16,000 fans. Its foul lines were’t terrible — about 340 to left and 315 to right — but its center field depth was an eye-popping 560 feet from home plate. 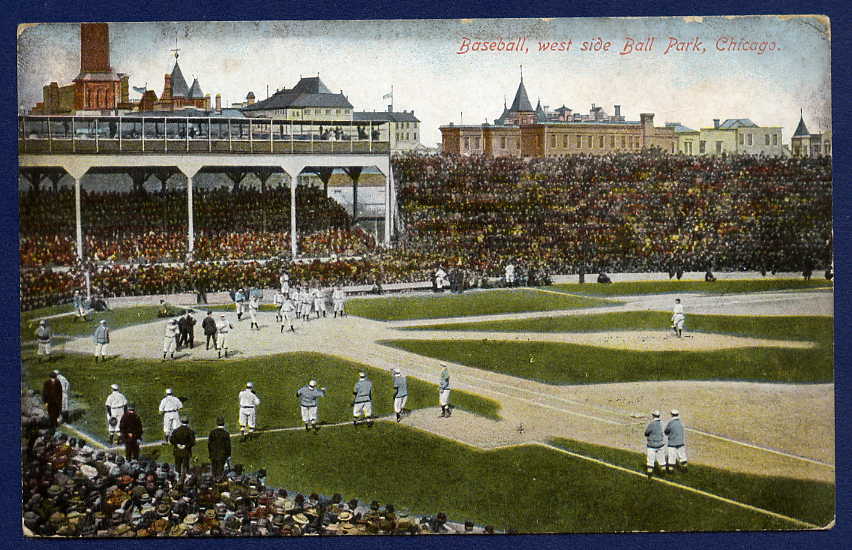 The Polo Grounds of 1908 was, like West Side Park, a wooden ballpark. It was similarly shaped as the Polo Grounds of the 1920s through the 1960s, but without the familiar horseshoe shape with its double-decked grandstand that went all the way out to center field and enclosed the playing field.

This Polo Grounds was the site of the famous Merkle’s Boner game between the Cubs and the Giants. With the National League pennant on the line, Fred Merkle of the Giants made a baserunning blunder when he failed to touch second on what appeared to be a walk-off hit and was subsequently forced out, negating the winning run. The Cubs and the Giants then ended the season tied, necessitating a make-up game (as the Merkle game was unfinished due to rioting) as, essentially, the first play-off game in major league baseball. The Cubs won that game, 4-2, and went on to defeat the Detroit Tigers in the World Series.

As sports commentators no doubt will mention in the coming weeks, the Cubs have not won a World Series since 1908. If you ask me, if there’s a curse on the Cubs, it’s because of Giants manager John McGraw. McGraw was, to be charitable, an asshole, and he didn’t consider the Cubs the legitimate champions. He had medallions made for his Giants that proclaimed them the real world champions (McGraw wasn’t a fan of the American League, either, which is why he refused to play in the World Series of 1904 when the Giants won the National League pennant that year), and if there was a curse placed on the Cubs, it was placed on them in 1908 by McGraw. 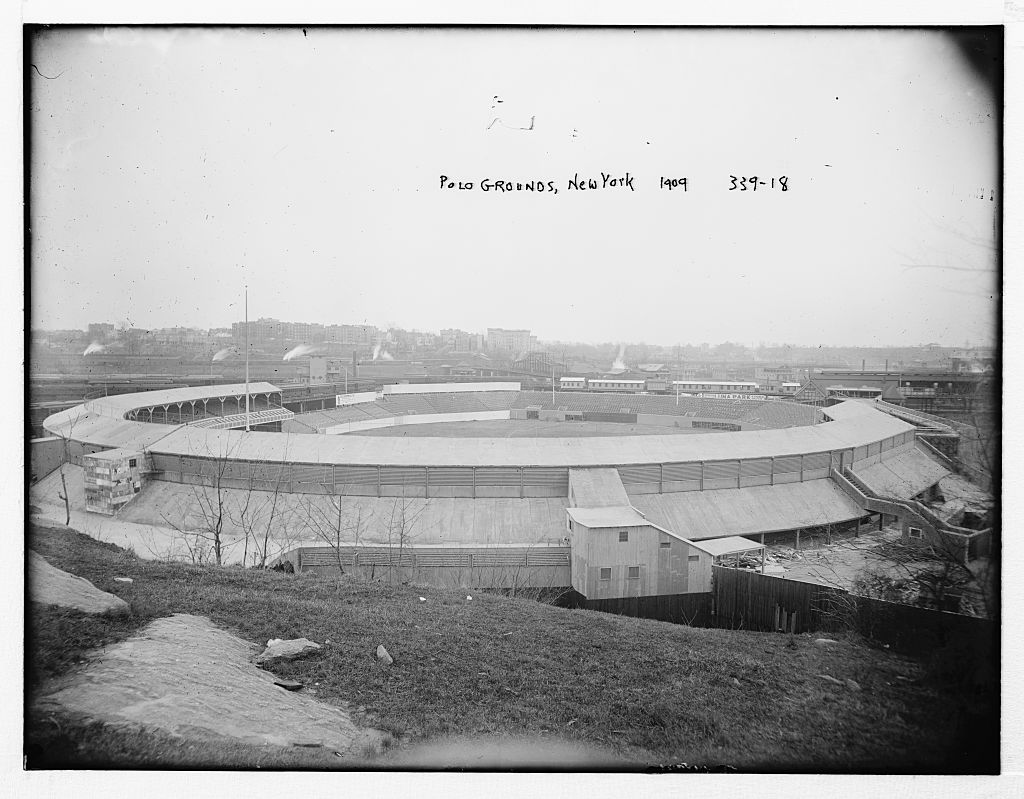 This Polo Grounds burned to the ground in 1911. Part of the stadium survived, mainly the outfield bleachers, and those were retained when the grandstand was rebuilt as a concrete and steel ballpark. While the construction was ongoing in the spring of that year, the Giants moved temporarily into Hilltop Park, home of the New York Highlanders (better known today as the Yankees).

The West Side Park, of course, was abandoned by the Cubs in 1916 for Weeghman Park in Chicago’s north side, to be renamed Wrigley Field. I believe a hospital stands now where West Side Park once stood.

The Cubs and the Giants still play, six or seven times a year, but the games between the two teams don’t have quite the import and drama that they did back in the early 1900s. The coming week’s games will be as momentous and weighty as they were back in 1908.

Tomorrow, the ancient rivalry between these ancient clubs resumes. May their clash be as momentous as it was in those long ago days.