Scenes from the Women’s March in Baltimore

Today I attended the Women’s March sister march in Baltimore.

There isn’t much of a narrative here, and I’d struggle to stitch one together. I’ll give some brief background, an account of what I did and witnessed, pictures of what I saw, and some final remarks. This is going behind a link, as there are a lot of photos embedded. I took over 150, and I’ve pared them down to 28. That took a while to do.

In October, I started thinking about attending the inauguration. I was, of course, operating under the assumption that Hillary Clinton would win the presidency, and I wanted to be on hand to witness the inauguration of the United States’ first woman president.

That didn’t happen. Clinton won the popular vote, true, but that’s not the rules by which the “Win the Presidency” game is played. As my friend Dave Galanter put it on Facebook shortly after the election, and I’m paraphrasing from memory here, there’s no such thing as a popular vote for president, just a highly accurate state-by-state poll that looks like an election. He’s not wrong in saying that, because that’s actually an insightful way of describing the presidential election process, but there’s also something wrong with our political process where the popular vote can “break” with the Electoral vote (ie., the vote that actually matters) twice in twenty years, especially as drastically as it did this election cycle. The question, of course, is what, if anything, can be done to “rebalance” the popular and Electoral votes and bring them back in line in the future. I have ideas on this question, but that’s beside the point here and a topic for another time.

After the election, the idea of a march for women on Washington after the inauguration took root. And after some twists and turns, it happened today.

Meanwhile, around the world, “sister marches” took place, organized by local activists under the rubric of the Women’s March.

I thought, briefly, about going to the Women’s March in Washington. But I remembered the zoo that was Jon Stewart’s Rally for Sanity, and the idea passed. Then, last weekend, I took a look at the Women’s March website and saw that there was a sister march in Baltimore, in front of John Hopkins at 33rd and Charles. I didn’t RSVP for it on the website, but I kept it in the back of my mind as something I would do, weather permitting. Drive down from York, take the Light Rail into the city, walk to Hopkins, do the event, go home. That seemed like a sound plan.

On Friday, when checking the Women’s March website to confirm the time and location, I saw that there were closer sister marches in Lancaster and Harrisburg. I decided to stick with my original plan.

The morning was drizzly and foggy, and not much above 40 degrees. I left about 9:30, wearing my pink Harrisburg Senators pink ribbon t-shirt. (I’ve only worn it a few times, for baseball Pink Night games. This was probably the first time I wore it for something other than a baseball game.) I took a hoodie with me, hoping that it would be warmer and sunnier in Hunt Valley when I caught the Light Rail, but it wasn’t, so I left my hoodie in the Beetle and wore my heavier coat instead.

The Light Rail trip was unremarkable, and the walk from the North Avenue stop to Hopkins wasn’t bad, fifteen blocks or so. I took pictures of churches along the way (a hobby of mine), and as I neared the intersection of 33rd and Charles I saw that Charles Street was closed off by police cars. I passed through the cordon and continued up the street, and I saw that they had closed off streets leading to that intersection so that protesters would be safe from traffic.

There were several hundred people there when I arrived about 11:30. People continued to arrive throughout the next hour; I’m terrible with gauging crowd sizes, but I’d say the crowd totaled between two and three thousand people. (Edited to add: The Baltimore Sun article on Baltimore’s event puts the count at 5,000 people.)

The crowd was a mixture of people. I saw children as young as three or four, and I saw elderly people in wheelchairs or with walkers. If I had to plot ages, though, I’d put clusters around early 20s and over 50. Women outnumbered men, but not overwhelmingly so. All races were represented.

People brought signs. I’d thought about making a sign myself, but I’d have done something silly like a “Careful now!” sign (a Father Ted joke). Some were clever. Some were profane.

A man brought a tuba, and he walked through the crowd playing the Oompa Loompa song from Willy Wonka and the Chocolate Factory.

There were chants — “My body, my choice,” “Love trumps hate,” “Yes we can,” “Health care matters,” “Black lives matter,” “Not my president.” A woman near me tried to start a “Stronger together” chart (Hillary Clinton’s campaign slogan), but it fell flat in the crowd. Songs were sung, too — “This Land Is Your Land,” “We Shall Overcome.”

A camera drone flew overhead. The crowd applauded. Someone near me flipped it off. “I bet it’s the police or the CIA,” he said. “They’re probably using facial recognition software on us all.”

There was no march. There were no speakers. (Edited to add: Per the Baltimore Sun article, there were speakers. I simply couldn’t hear them, bullhorn or no. I imagine I wasn’t alone.) The crowd gathered, stood at the corner, shook their signs, chanted and cheered, sang songs. People showed off the signs and were photographed with them the way cosplayers show off their costumes and are photographed at science-fiction conventions.

People near me began to leave as early as 12:15. When they realized that this was all there was to the Baltimore sister march, there wasn’t much reason to stay. They’d shown up, graced the event with their presence, and left. Even I became restless. I wandered the crowd.

There was a fraternity house along Charles Street that had a Trump “Make America Great Again” flag flying from one of their third storey windows. People from inside the frat house were occasionally shouting at the crowd.

I saw a few people I knew. One, someone who works for Diamond. (I don’t know him, but I’ve seen him on my end of the building.) Another, someone I know through Farpoint and Shore Leave.

The sun never broke through the clouds, and a misting drizzle began to fall shortly after noon. There was a light fog.

At one o’clock, clapping broke out, and the crowd began to disperse.

Since I was right there, I went to the Baltimore Museum of Art. They had a Matisse exhibition. I bought the special ticket for it.

The walk back to the North Avenue light rail stop was uneventful. By now it was well past 3 o’clock, and while it seemed warmer than it had been, the fog was heavier. And when I got back to Pennsylvania, the fog was pea-soup thick.

That, then, was my experience at the Women’s March in Baltimore. Chanting and singing, but no marching. 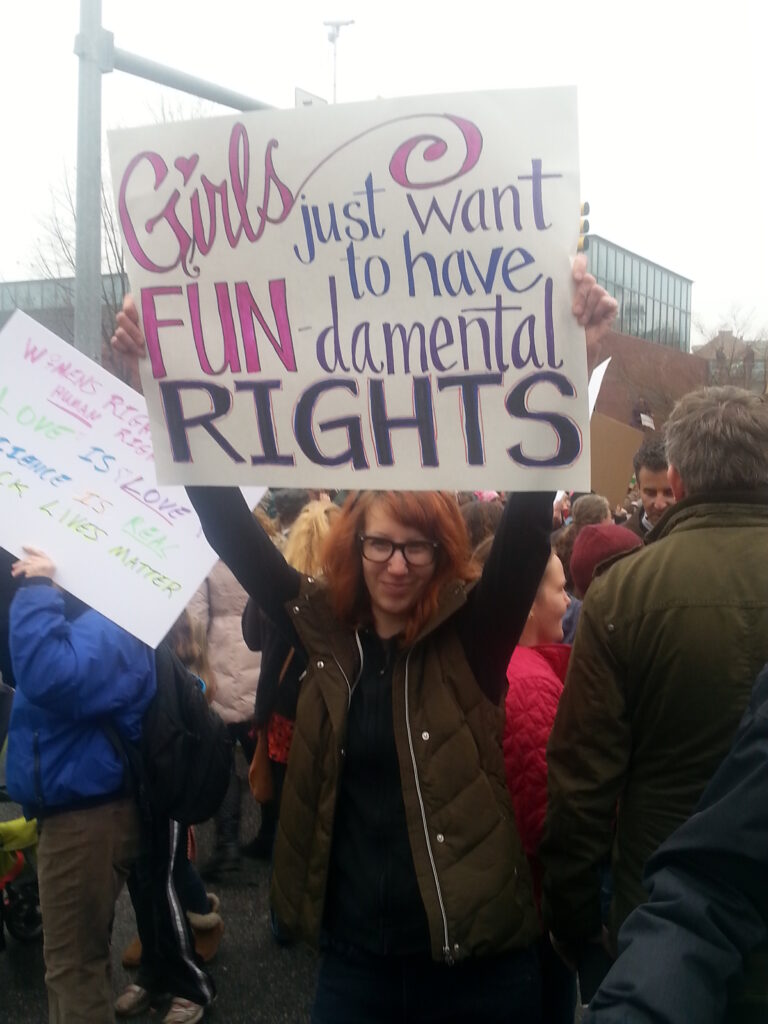 I can’t speak to what happened at other marches, either the main march in Washington or the marches around the world, as I wasn’t there. It is clear, as I write this, that the turnout for the Women’s March in DC vastly outnumbered the turnout for Donald Trump’s inauguration yesterday, despite whatever his press flack Sean Spicer says to the contrary, and around the world the total number of participants numbered in the millions, if not tens of millions.

But, based on my experience and observations in Baltimore, I have to ask. To what end?

We showed up, we said some chants, we went home. Maybe I’m being overly cynical, but this felt, to me, like slightly more than slacktivism. That we’d done the bare minimum of making clear our dislike of Trump by showing up. That it was the Rorschach blot of protests and meant whatever each individual wanted it to mean.

The enthusiasm and energy is fantastic to see, but to be effective and make a difference, rather than just show that people can out-organize Trump’s inauguration, it needs to carry on into other actions — going to Congresscritter town hall meetings, letters to representatives about legislation, phone calls to Senators about Supreme Court nominations. That local races — city, county, township, state — need to be treated as important as Congressional races, and those Congressional races need to be treated as important as the presidential campaign.

I’m not typically one to quote Winston Churchill, but in the war against Donald Trump and the nihilism of the Republican Party, “this is not the end. It is not even the beginning of the end. But it is, perhaps, the end of the beginning.”