Diamond Comic Distributor‘s 2017 Retailer Summit was held last week in Chicago, in conjunction with the C2E2 convention. I had long been asking to go on some sort of work trip like this — I wanted to see a different side of the industry and meet the retailers — and this year the production schedules on the catalog aligned in such a way that I could attend a Diamond retailer event.

Before the Summit began, some of us from the Marketing Department made a pilgrimage to Wrigley Field to see the Chicago Cubs play the Milwaukee Brewers. I’ve been a Cubs fan for a very long time, and while I’ve seen the Cubs in person at Nationals Park, this was the first time I had ever been to Wrigley.

Our plane touched down at Chicago’s Midway airport, we dropped our stuff at the convention hotel, and then took a trip up to Wrigley. It was chilly and drizzly in Chicago, and, like a stupid person, I’d left my hoodie in my Beetle back at BWI in Baltimore. So, before I did anything, I went in a Cubs apparel store there in Wrigleyville and bought myself an inexpensive hoodie.

I’m assuming it’s licensed, but it’s hard to tell with these things.

We made our way to the Bleachers Gate, and there we were met by a ginormous Harry Caray statue.

Naturally, I had to take a selfie with Caray. 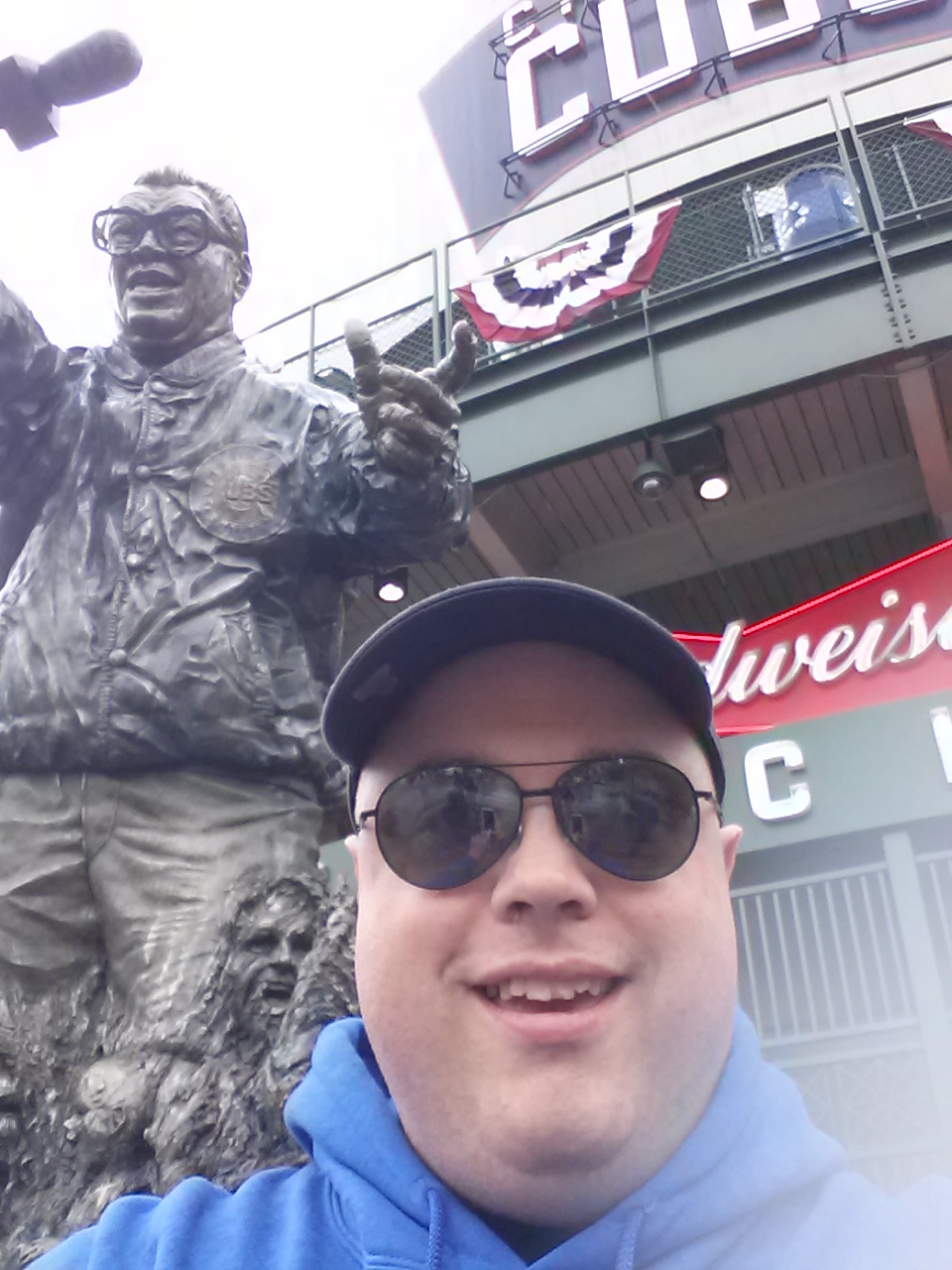 We took the ramps up to the bleachers, and there it was, Wrigley Field spread out before us.

All I could think of, at that moment, my first time standing there, looking at Wrigley Field, even with the tarp over the infield, was Eddie Vedder’s song, “All the Way”:

Don’t let anyone say that it’s just a game
For I’ve seen other teams and they’re never the same.
When you’re born in Chicago you’re blessed and you’re healed
The first time you walk into Wrigley Field.

I love the song. Vedder wrote it back in 2008, inspired by Ernie Banks, and it’s become a Cubs anthem. Honestly, I prefer it to “Go Cubs Go,” which isn’t a bad song, just an overplayed one.

Naturally, I had to get a picture of myself with those, too.

There were two more murals that I liked, both harkening back to pre-World War II days.

You can’t go to Wrigley without taking a picture of the famous scoreboard.

For me, one of the most fascinating parts of the Wrigley Field experience was a museum devoted to the team’s Hall of Famers beneath the bleachers. An usher explained to me and my group, when we first stood and looked out at the field, that while fans with bleacher tickets can visit the grandstand, fans with grandstand tickets aren’t allowed to visit the bleachers. The rain delay gave me some time to walk around, so I went beneath the bleachers and took pictures.

Before long, the tarp was taken up, crews came out to try and dry the field (complete with blowers), and the field was prepped for play.

Line-up cards were exchanged, the National Anthem was sung, and it was time for some baseball in the Friendly Confines!

The Brewers struck early and often off of Kyle Hendricks, while former Harrisburg Senators great Tommy Milone kept the Cubs off the board.

There was an interesting drama in the bleachers — we were blessed, if you want to use that term, by a group of, as I put it, “drunken Notre Dame dudebros.”

To be fair, I have no idea if they were, in fact, drunk, but they were definitely from Notre Dame (they were all wearing some piece of Notre Dame apparel) and they were jerks. They heckled. They shouted. They raised a ruckus. They even tried to start the Wave, which led to others in the bleachers to shout at them, “You do not do the Wave at Wrigley!” (I’ve done the Wave at Nationals Park. During a Fourth of July game against the Cubs, actually.) Ushers watched these guys like hawks, one from the side and one from the front.

The target of the Notre Dame dudebros ire was Brewers’ right fielder Hernan Perez. They tried to get Perez to throw them the ball. Perez pump-faked a throw, and they only shouted at him more. Perez pulled out a hand warmer and began to shake it; they mocked him for that. At one point they began singing some sort of song at Perez, whereupon Perez spun around and began to conduct them like an orchestra.

Hernan Perez may be a Brewer, but he won a fan in me that day. He took the heckling and the abuse with good humor. We should all take a lesson from that.

Also in the later innings, gulls swarmed the field. They circled the field, sometimes landing on the field in groups of two or three, then drawing others to circle overhead. Gulls buzzed the bleachers. Sometimes spectators peanuts at them. Sometimes the gulls defecated, dropping a load of gull guano on a fan or, hopefully, an empty bleacher seat. I assumed they were in search of food, but you never can tell with gulls. Wrigley that afternoon may simply have been a target-rich environment for their bombardier skills.

In the late innings the Cubs staged a comeback against the Brewers’ bullpen. They would win it in a walk-off in the bottom of the ninth.

We took the L from Wrigleyville back to the convention hotel, and after that was the opening reception for Diamond’s Retailer Summit.

It was a long day — getting up at 4 o’clock, driving down to BWI, flying to Chicago, going to a baseball game, working a company reception until 10 o’clock — but it was completely worth it. 🙂