Tragically, Ian Fleming only wrote 8 James Bond short stories. (Nine, if you count the short piece about making scrambled eggs. I do not.) I say “tragically,” as I consider “The Living Daylights” to be Fleming’s finest James Bond work. (The Timothy Dalton film The Living Daylights generally does justice to Fleming’s short story in its first act.) The short story may not seem like the ideal length for a James Bond story, but that’s only because our idea of what a James Bond story can and should be has been warped and molded by fifty years of increasingly convoluted and ever more spectacular films that lack the focused concision of a straightforward short story. There’s pleasure to be found in a singular story. 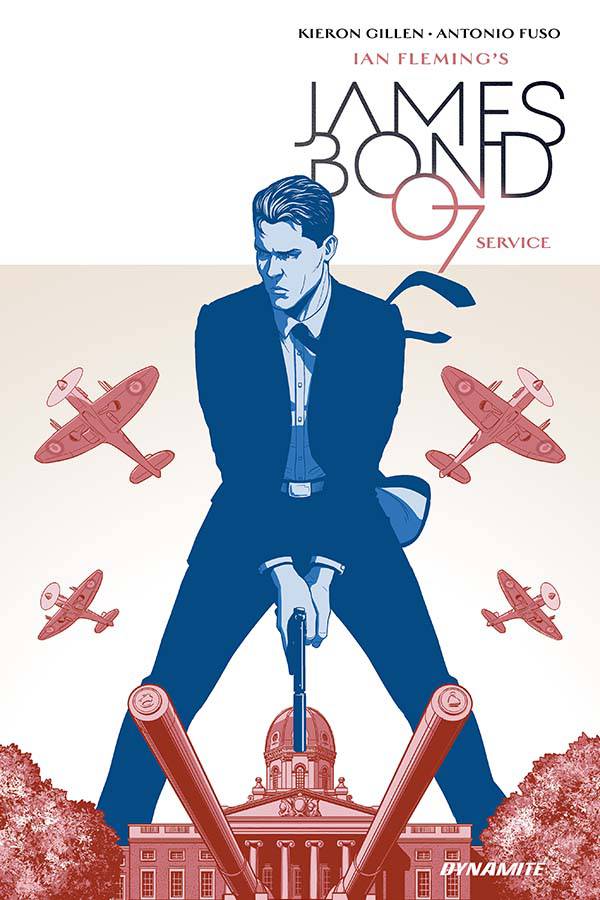 Which is why Service, the new James Bond one-shot from Kieron Gillen (Phonogram, Star Wars: Darth Vader) and Antonio Fuso, published by Dynamite Entertainment, is such a delight.

A new American administration, one extolling nationalism and American unilateralism, downplays the importance of the long-standing “special relationship” between the United States and the United Kingdom on the eve of the Secretary of State’s visit to Britain for high level talks. Meanwhile, someone has anonymously sent MI-6 a coded message and a parcel that suggest an attempt will be made on the Secretary of State’s life. Due to the sensitive nature of both the target and the transatlantic political moment, M assigns Bond to investigate and, if necessary, neutralize the potential threat.

The result is something blissfully straightforward. Bond investigates. Bond locates his quarry. Bond is captured and beaten up. The villain reveals the plan. There is an escape and a firefight and a resolution and a harsh coda.

Service‘s story is grounded in the political now. Not only does Gillen draw on the new nationalism exhibited by the current presidential administration, he also draws upon the backlash to the EU that prompted the Brexit vote last summer. Gillen uses these elements as a backdrop to his story, informing the world James Bond operates in but not overwhelming it. Gillen’s answer to the age-old question, “Does James Bond work when divorced of his original Cold War setting?” would be, unequivocally, an emphatic yes.

Gillen uses one of his trademark touches — a conversation told symbolically — in one section of the story. By “symbolically,” I mean that, rather than spell out the dialogue’s conversation, Gillen collapses the actual words down to a few visual symbols. The reader gets the idea of what Bond and his conversation partners discussed without going through the actual dialogue, dialogue that would have taken more time and space. Fleming would have achieved the same narrative economy by summarizing the conversation in a sentence or two — something like “The woman at the door told Bond, after some careful questioning, the man he was looking for sported a phoenix tattoo on the back of his shaved skull.” Gillen and Fuso simply make use of the illustrated form of comics to achieve that same economy.

In my book, Service compares favorably with “The Living Daylights.” Both are straightforward stories, well told. If you like your Bond gritty and hard-edged, Service is the James Bond short story you want.