The new year began with a day bereft of human contact, save for the online kind.

At midnight, there was the sound of distant fireworks and gunfire. I’ve often likened it to the sound of artillery shelling. I wonder how people from Sarajevo or Aleppo would react. 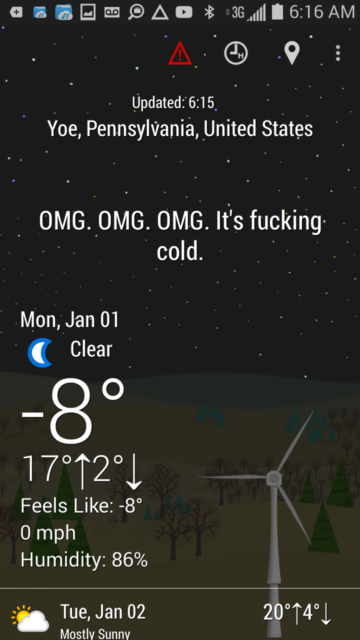 I didn’t even sleep late today. But I was in no hurry to get out of bed. My phone told the tale. Bitter cold. Bitter, bitter cold. A full ten degrees lower than the day’s forecast low.

Who wants to go outside on a day like that?

I resolved not to go outside. I could sit inside all day, with the radio and the Christmas tree, and be content. I had food, I had drink. I would manage.

But that meant not talking to a single human soul.

Humans are social creatures. Conversation is a key component of human behavior. It’s how we bond and relate with one another.

Suffice it to say, I’ve been kinda climbing the walls.

I did venture out once, to get the mail (which I’d left in the mailbow since Saturday due to the snow and the cold). I needn’t have bothered; it was a membership solicitation for the Sierra Club.

I’m thinking of putting on my coat and gloves and scarf to go look at the full moon. I’ve looked out the window and it’s quite bright.