Yesterday evening, scrolling through Facebook, I saw a former colleague of mine from EB Games, M, post the following meme image, without any commentary: 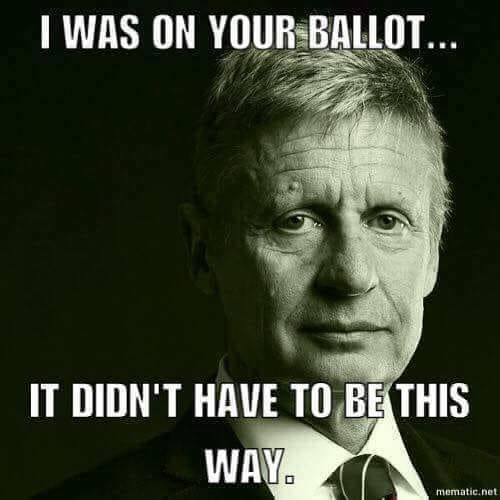 I posted a quick reply: “Honestly, what do you think would have been different with Johnson?” I didn’t expect a reply, but one was soon forthcoming.

In case that’s not entirely readable, M wrote: “Biggest thing is that he would not have signed the omnibus bills increasing spending and the debt. I believe we would be closer to bringing troops home and being less and less involved in everyone else’s business.”

I spent some time thinking about this. What really would a Gary Johnson presidency have been like? Would it have been better? Or worse?

Before I delve into these questions, I want to be clear about a few things.

I’m also not convinced that a Hillary Clinton presidency (and, full disclosure, I happily voted for Clinton) would have been an especially successful one. Facing a hostile Congress, Clinton’s presidency would have been, much like Obama’s second term, a largely ineffective presidency with little legislative accomplishments, constant Congressional investigations (whether legitimate or not), and, more than likely, an ever decreasing number of justices on the Supreme Court as Mitch McConnell and the Republican-led Senate refused to take up her judicial nominations. Clinton would probably have been a single term president.

Those out of the way, let’s delve into an alternate universe, one where Gary Johnson, Libertarian Party candidate for President in 2016, was elected president.

Donald Trump has Republican majorities in both the House and the Senate to push his agenda and, if you’re uncharitable, cover for his misdeeds. Hillary Clinton would have had large Democratic minorities in both the House and the Senate to push her agenda as best they could. Gary Johnson would have had two parties opposed to him. He might have found common ground with Republicans on some of his spending priorities on the discretionary side, but other spending priorities, such as on defense, would have run into headwinds. Democrats might have backed some of his policies, like rethinking the war on drugs, but his spending and tax policies would have been anathema. His closest allies would be some members of the Freedom Caucus, and they would have similar spending priorities on the non-military budget, but even they would diverge wildly on military spending. Johnson’s domestic agenda would have been dead on arrival on the Hill, and few Congressmen and Senators would have backed it, and fewer still would have championed it.

Then there’s the question of who works for Johnson. Many experienced politicians would shy away from working in a Johnson adminstration because it wouldn’t be a resume builder for the next time a Republican or Democrat sat in the Oval Office.

Essentially, imagining that a Johnson presidency would have been better than a Donald Trump presidency requires a certain naivete, the assumption that Washington isn’t a tribal place.

On some specific issues…

I suspect that M is correct that Johnson wouldn’t have signed the omnibus spending bill last year. But that would have been a Pyrrhic victory for Johnson, as both parties would have been able to demonize him in the media and peg the blame for the crisis on Johnson. The question is whether or not Johnson caves in a budget fight with Congress, and if he does when he does.

If sent an Obamacare repeal bill similar to the one Congress sent Trump, Johnson probably would have signed it. A full repeal would never have been in the cards, no matter who was president; there are too many aspects of the Affordable Care Act (like pre-existing conditions bans and keeping kids on their parents’ insurance until 26) that are popular with the public that doing much more than tinkering with the individual mandate (which is all Congress accomplished for Trump) wouldn’t have been politically possible.

We can be certain that Johnson would not have fired Jim Comey, and so he would remain the FBI director and the investigation into the Trump campaign’s links with Russia would be handled by the FBI and the Department of Justice, not a special counsel’s office.

I’d like to think that Johnson would have reined in Obama’s undeclared drone wars in the Middle East. But I don’t know. Johnson, faced with the reality of the military-industrial complex, would have faced the same difficulties in reining it in that Bill Clinton faced in the 1990s. I sometimes ask, “Whatever happened to the ‘Peace Dividend‘?” It never materialized; there are too many military pork projects that affect too many Congressional districts (look at the way the F-33 program is spread across something like 60 districts) and too many jobs at stake for a president to pull a plug a project without risking backlash from voters and criticism from Congress.

To return to the question, would Johnson have been better than Trump? The most that I can say is that it would have been a wash. He would have been a better executive, he wouldn’t have been defensive on the issue of Russian involvement in his presidential campaign, but he would have had few legislative victories, and his agenda would have been dead on Capitol Hill. In short, Gary Johnson would have been an historical weak president. For some, like my friend M, that would be a feature, not a bug; they believe that the presidency should be little more than a figurehead executive in charge of the military and little else. But we would see an erosion of American power and leadership in the world, similar to what we’re seeing with Donald Trump at present, and little lasting legacy domestically due to the political weaknesses facing his presidency.