Ducks splashed in the water.

Two larger ducks, adults obviously, sat on outcroppings just beyond the shoreline, while four ducklings paddled in the water. Sometimes, the adults would move from one outcropping to another. Sometimes they would see me, twenty yards distant or more, and take flight, either jump-flying to the opposite shore or, more commonly, splashing down in the water themselves, safely beyond my reach, adding ripples to a surface already tossed by gentle waves from the light breeze that rustled through the trees.

Otherwise, the ducks, brown, paid me no mind, nor I them. They were simply enjoying a beautiful late July day, the first such day in a week, on a pond, in a quiet woody area far removed from the bustle of Baltimore City beyond, with (almost) no one to bother them and not a care in the world.

Were it not for the circumstances, I too might have found something tranquil in the scene. But this pond wasn’t natural, and the outcroppings emerging from the water’s surface weren’t rocks or fallen tree limbs.

They were headstones, some of them over a century old, and this was a cemetery flooded by runoff from the heavy rains Baltimore had endured over the last week.

The rains had begun on the 21st and, over the course the next several days, something like fifteen inches of rain fell in Baltimore. The rains disrupted the Cal Ripken Collegiate Baseball League playoffs. The rains caused a headlight bulb in my Beetle to explode.

And, it occurred to me, perhaps the rains would cause Loudon Park Cemetery to flood again, as they had earlier this year. Saturday afternoon, I decided, I would drive down, take a look, and clean up what I could, as I had in June.

I hadn’t thought there would be so much water that I would be unable to reach my great-great-grandmother’s grave.

I got out of the Beetle, in park and the engine still running, walked into the grass a dozen feet, and stared at an enormous lake. I could see one end of it, at the railroad tracks, but I couldn’t see where the lake ended inside the cemetery. All I could really tell was that the last covered a vast amount of the cemetery, and everything looked wrong, not only because of the water but because landmarks I was accustomed to seeing were simply gone beneath the surface. In some ways, I found it difficult to orient myself. 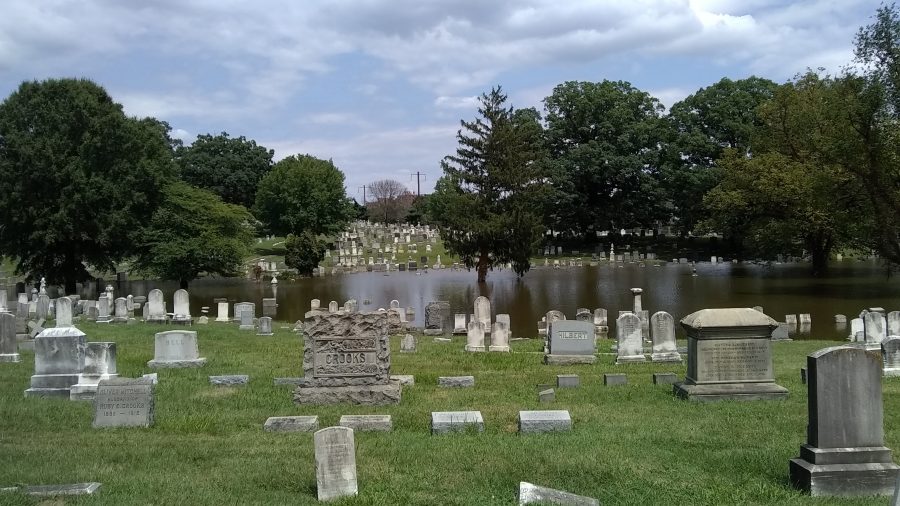 I backed the Beetle back up the hill — tricky enough due to the narrow, poorly paved road, but doubly so because of headstones all around — and parked it some distance away.

Then I hiked in.

Loudon Park Cemetery is built on a series of hills, and the area where my great-great-grandmother Susan is buried is at the bottom of these hills. Where sections Whatcoat, RR, and U meet is a basin, and water flows downhill here. But the water has nowhere to go, because just beyond the cemetery are railroad tracks, elevated on a pile, acting as a dam and blocking the water in. There was a pump set up along the tracks, pumping out the water, and that will take a long time.

My great-great-grandmother Susan’s grave was in the water. The top half of the monument was above the water’s surface. Based on debris carried out by the water and left behind as the water receded, the water had been higher, perhaps by another two feet. For right now, or at least as of Saturday, she and the other seven people she’s buried with (a daughter, her husband, two grandchildren, two husbands of one of those grandchildren, and a great-grandchild) are underwater.

A brace of ducklings swam past my great-great-grandmother’s grave as I stood there taking pictures. I didn’t even notice them; it wasn’t until I reviewed my photographs later that I even saw them there. 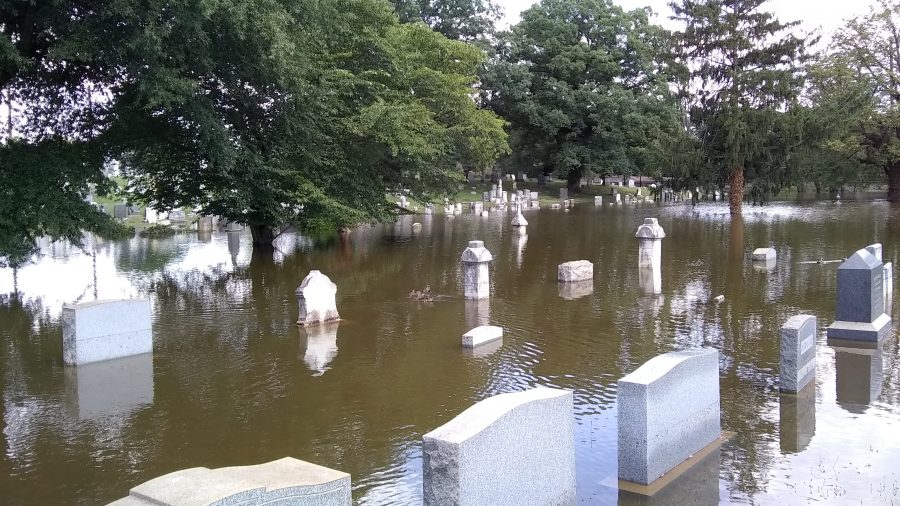 I had great difficulty finding Arthur, her son and my great-grandfather’s older brother. Arthur wasn’t underwater when I was there on Saturday, but he had been; a sealed can of (presumably) tuna fish sat atop his grave. In frustration, I hurled it into the air, and the can of tuna fish splashed into the water with an unsatisfying “plop.” 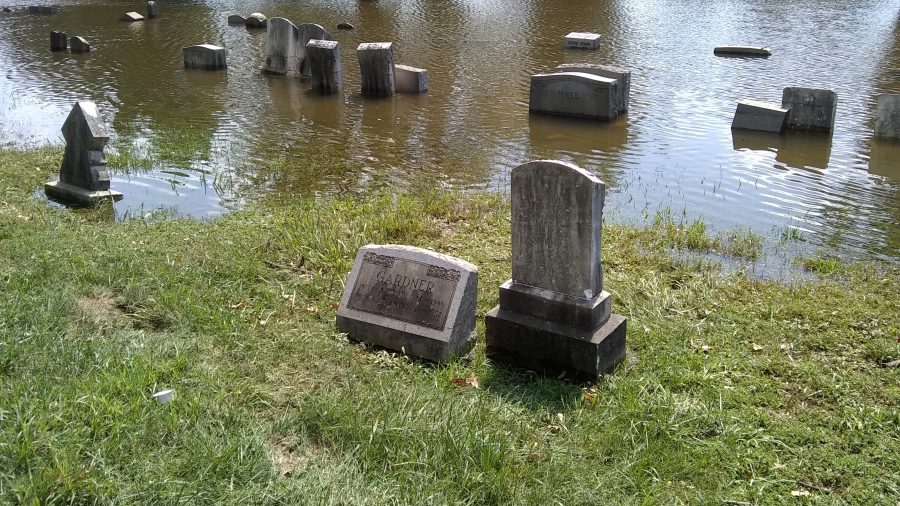 The problem with finding Arthur was that almost all of the reference points I would use to find his grave were gone beneath the surface. The only reference point that was not was the grave of George and Margaret McCabe which, for some inexplicable reason, has a brick sitting atop it at present. (The photo in the link, taken in 2013, has no brick, and Arthur Gardner’s headstone can be seen at right.) It was only by walking along the shoreline on the RR hill that I even found Arthur and, even then, I’m not sure I expected to.

The water was fairly clear. It hadn’t had time to become polluted and stagnant as it had been when I’d gone in June; then, the water was an obsidian black, highly reflective. It was eerie to see, just below the surface, footstones or the tops of headstones.

There was also no stench as there had been in June. Partly the stagnant water, partly the bodies buried beneath the ground, the stench then was overwhelming. Here, there hadn’t been time for the water to stagnate or for the ground beneath it to saturate.

Had it not been for my knowledge of how this place should have looked, this would have been a lovely place to spend an afternoon, relaxing along a pond, not a care in the world, like the ducks.

But I knew how this place should have been, and nothing about this was right.

It will be some time before the Loudon Park “lake” is drained, and more rain is in the forecast the next few days. 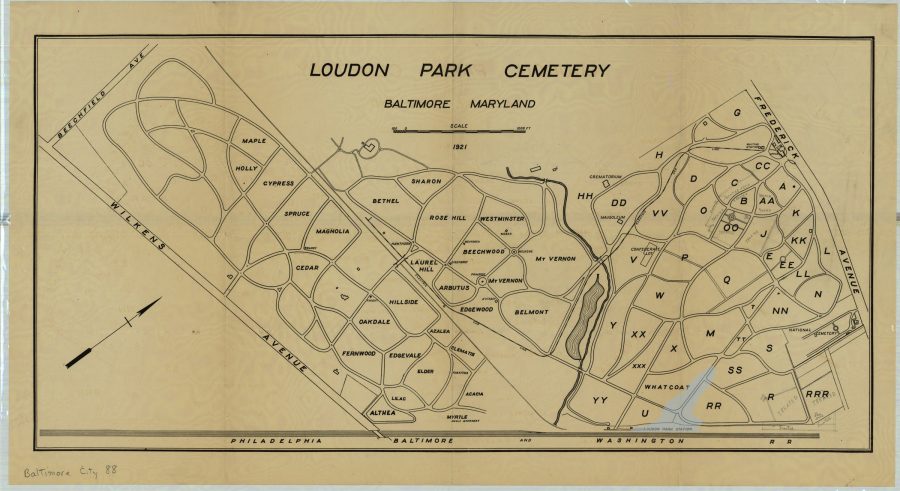 My personal estimate, in light blue, of the extent of the Loudon Park Lake, drawn on an old map of the cemetery

The dead are long past caring; they have no idea that this fate, of being underneath feet of water, has befallen their remains. But it saddens me to see this place in this way. 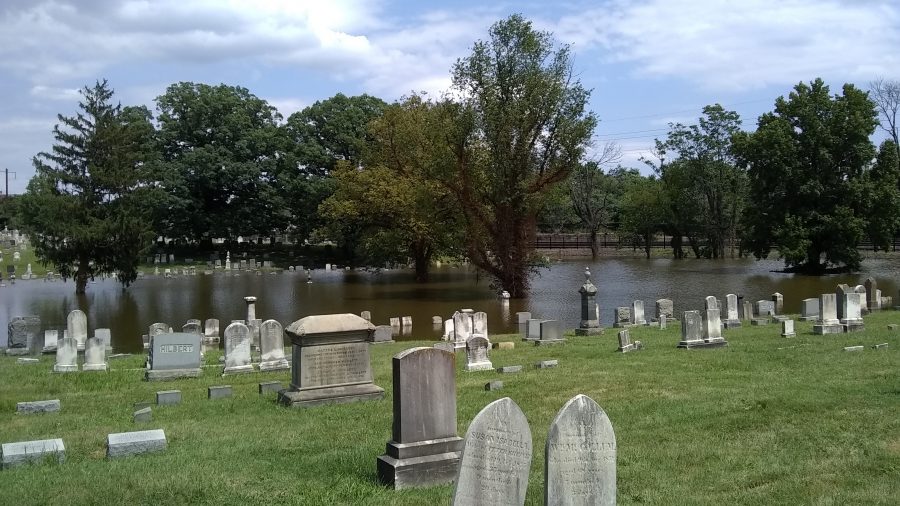 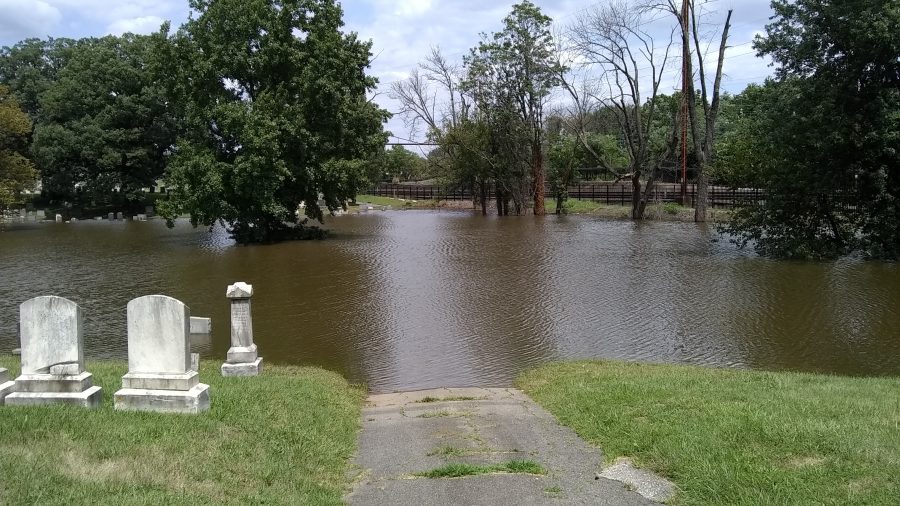 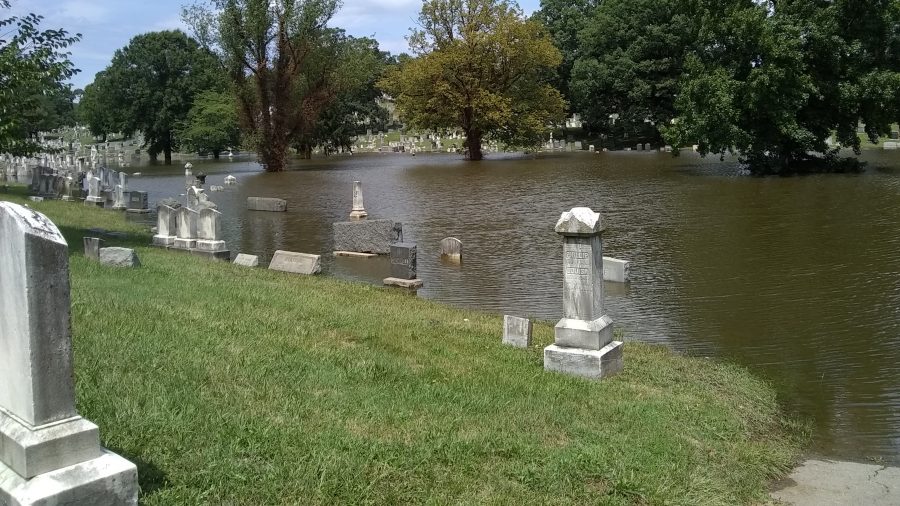 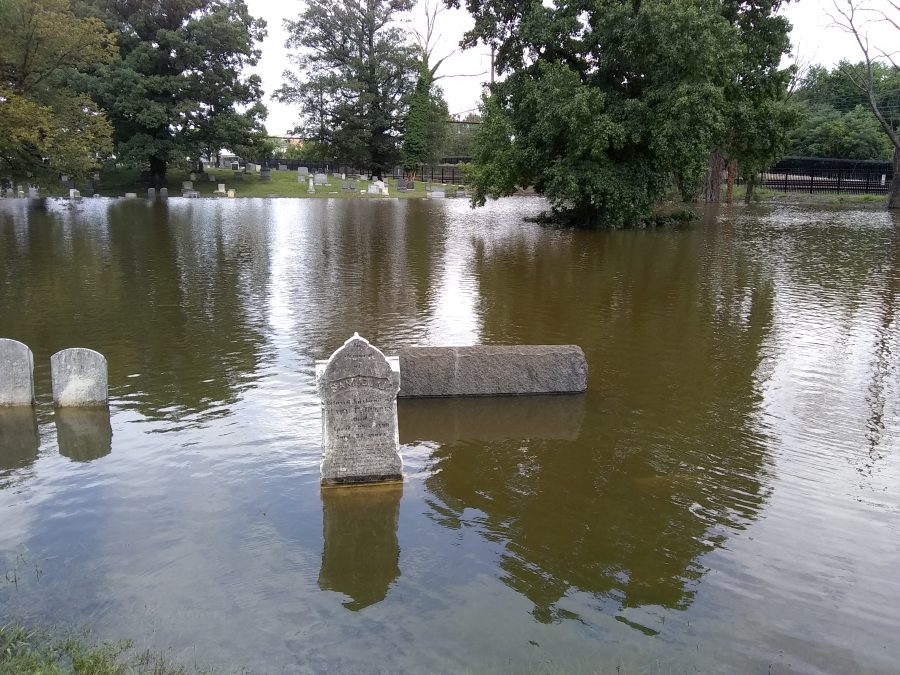 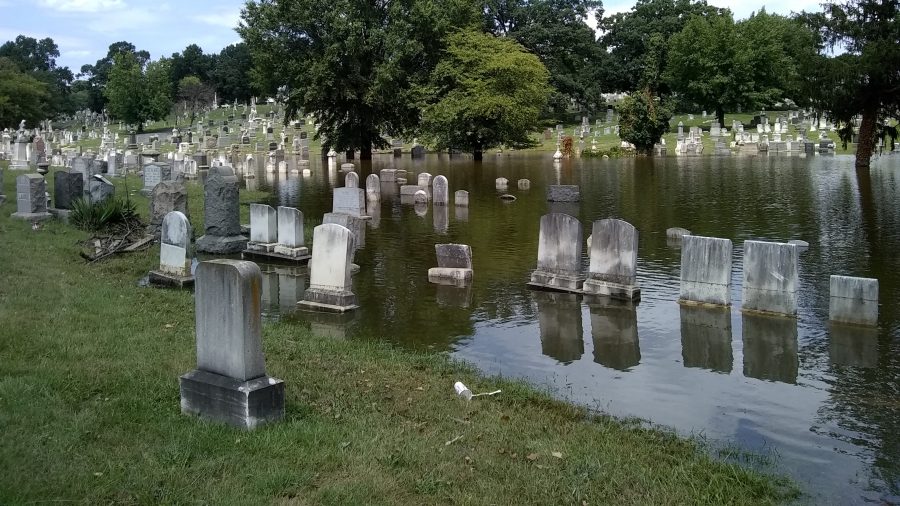 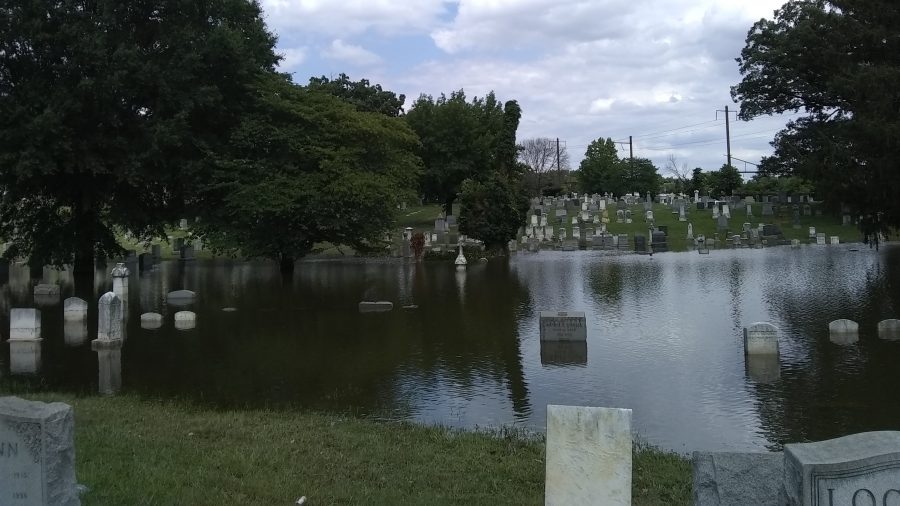 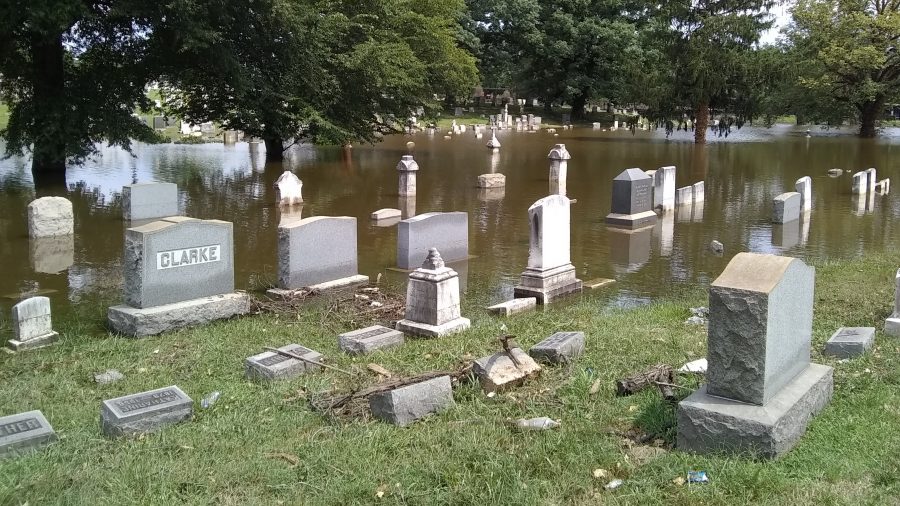 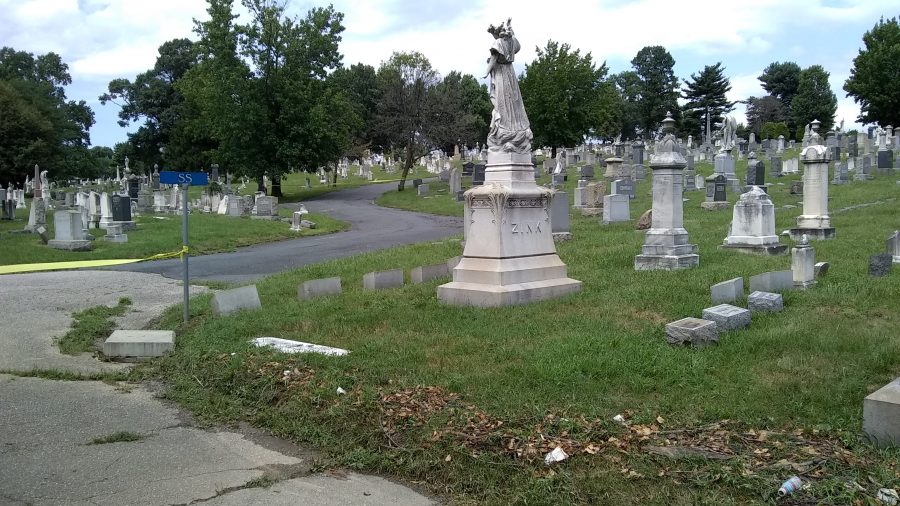 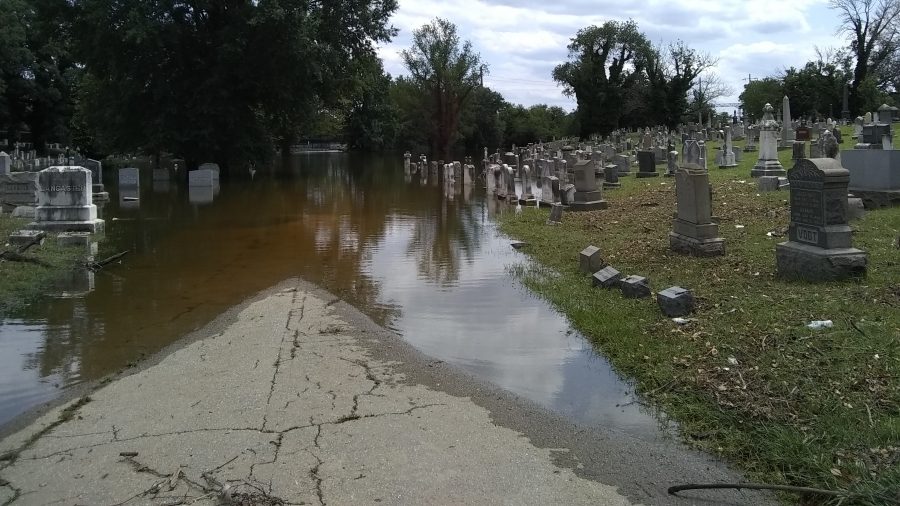 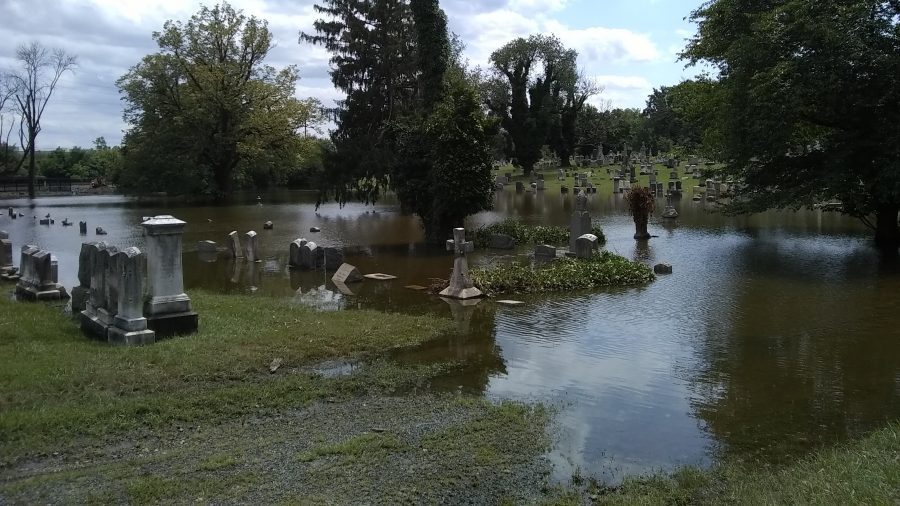 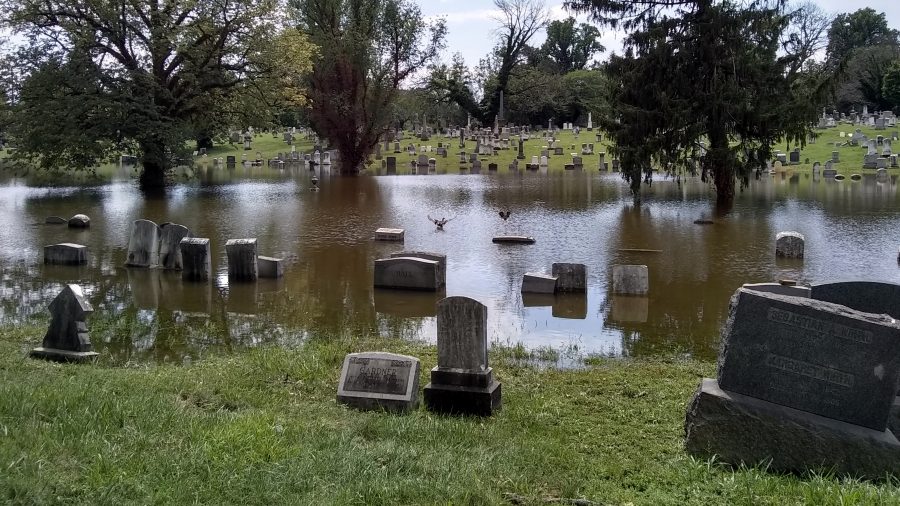 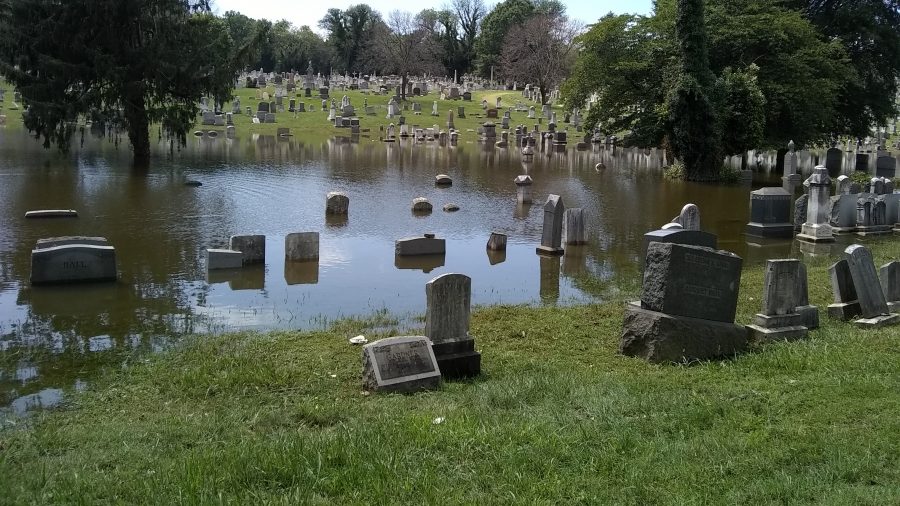 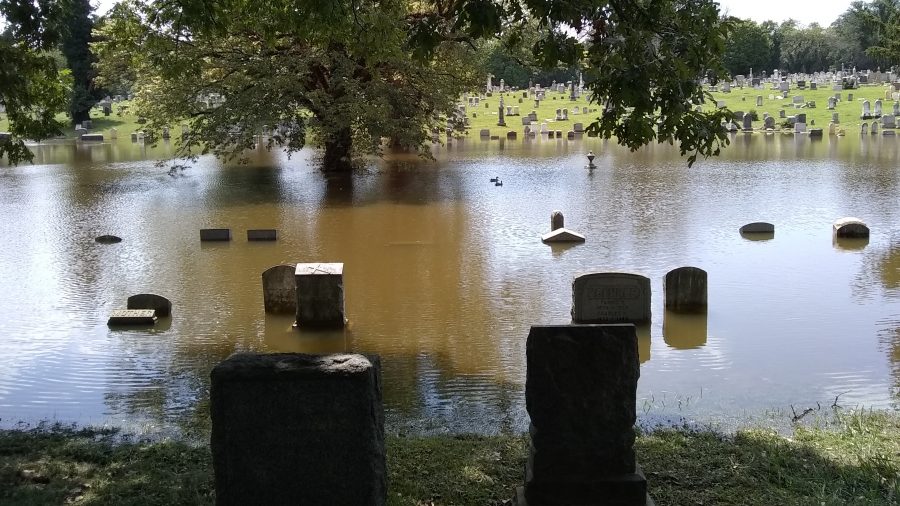 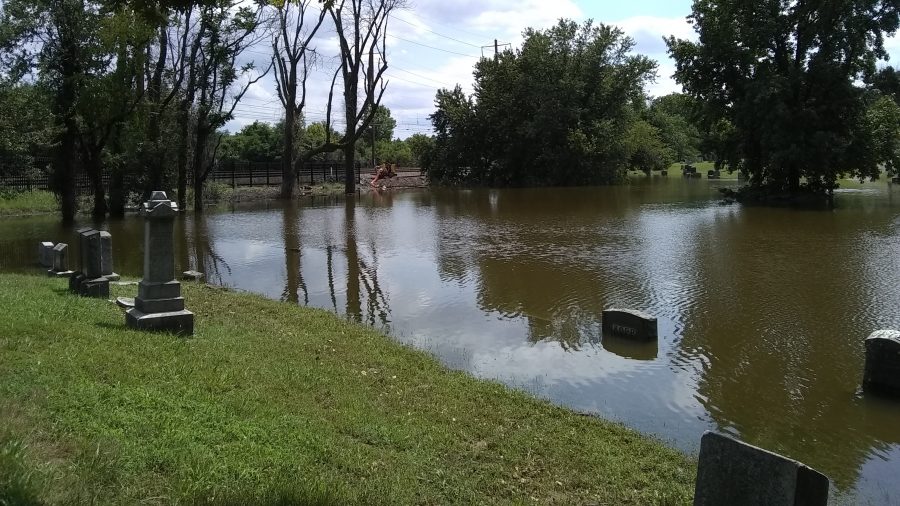 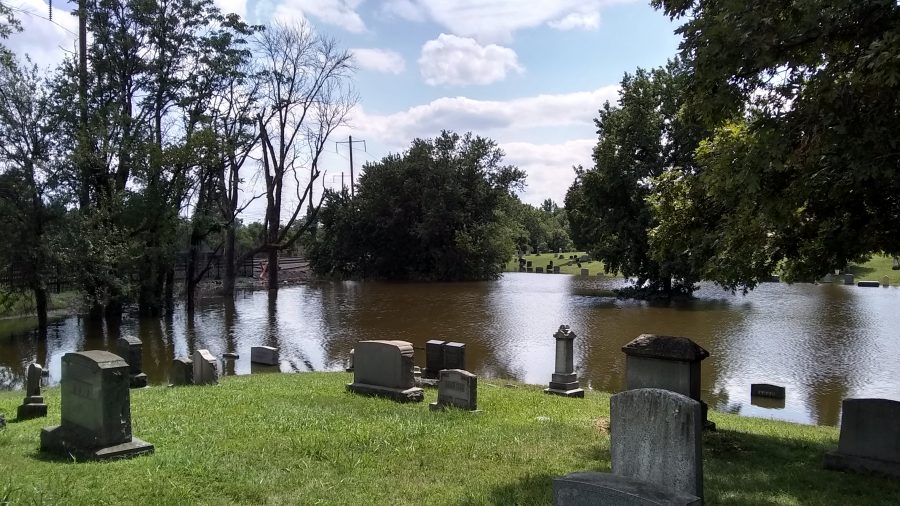 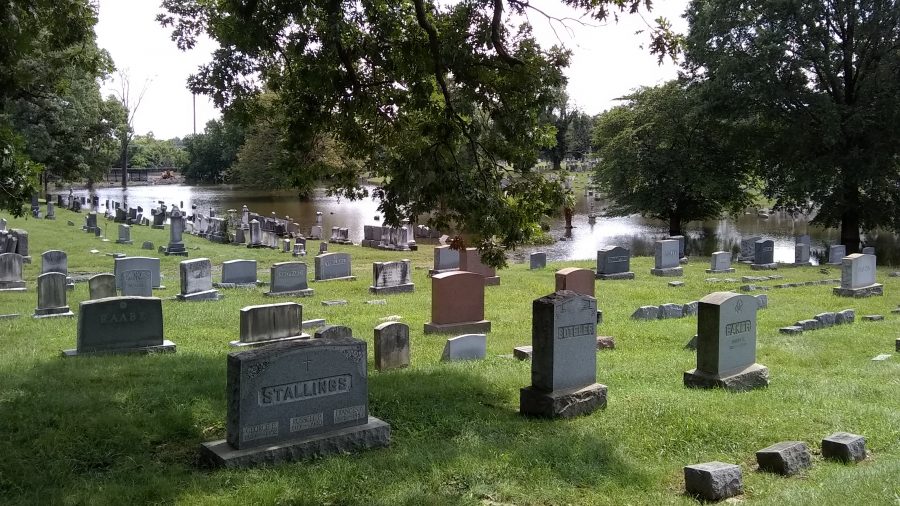 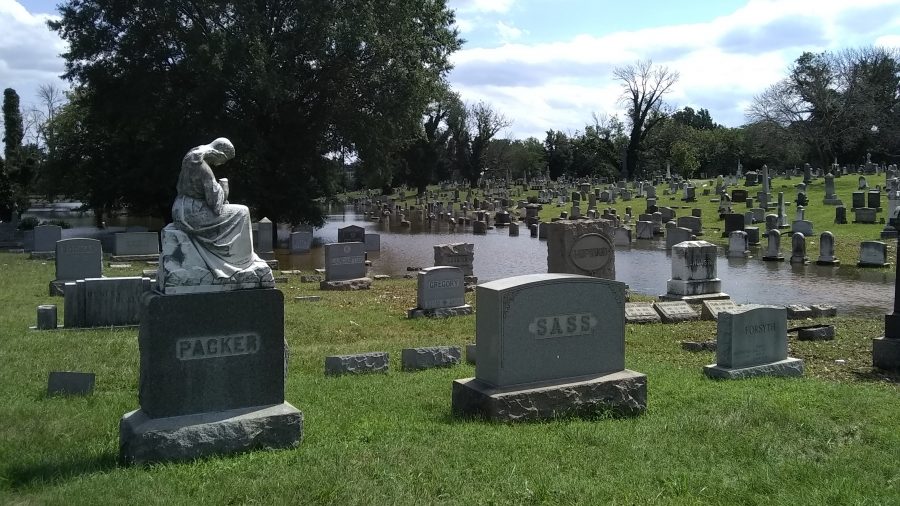 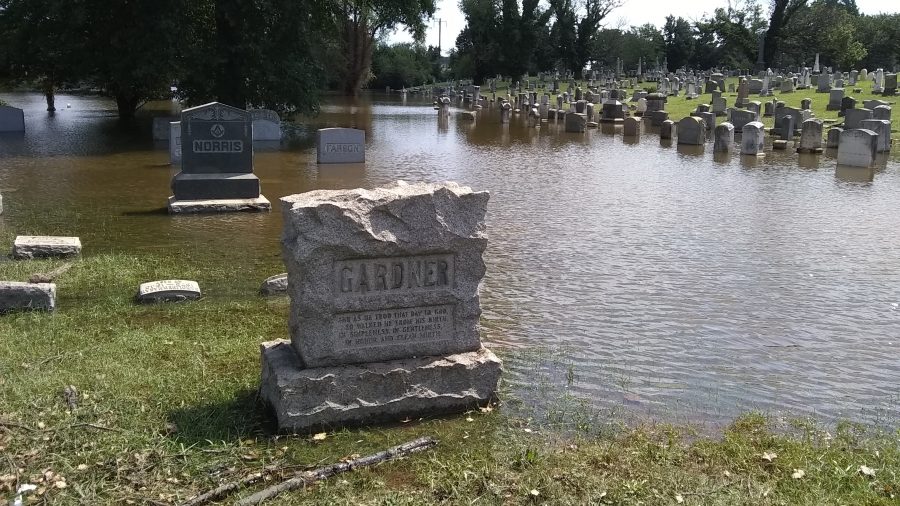 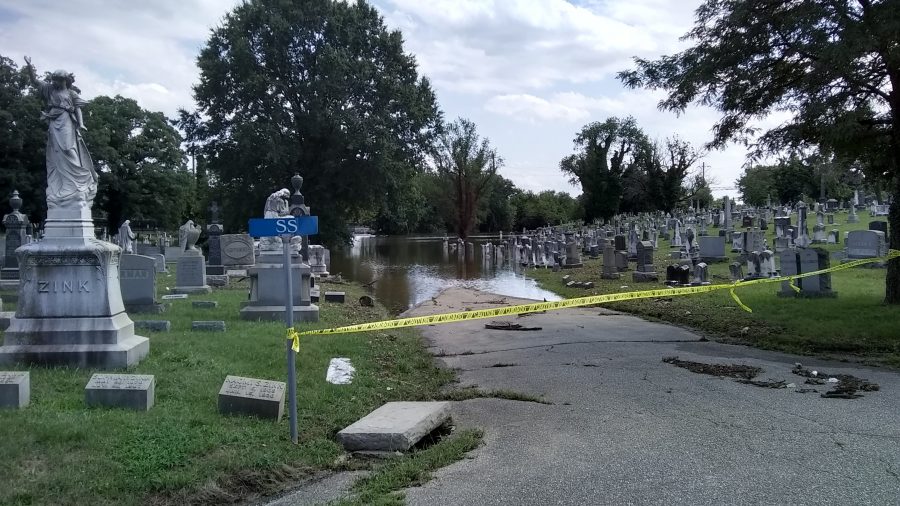 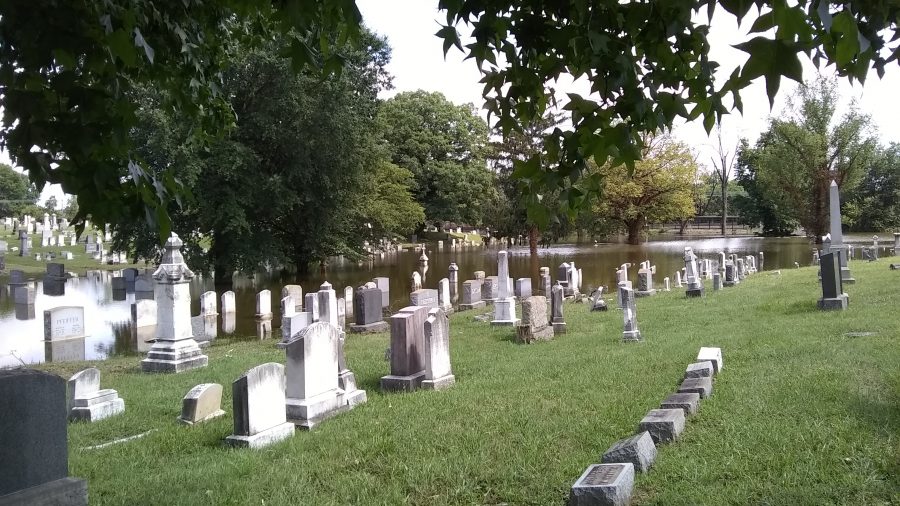 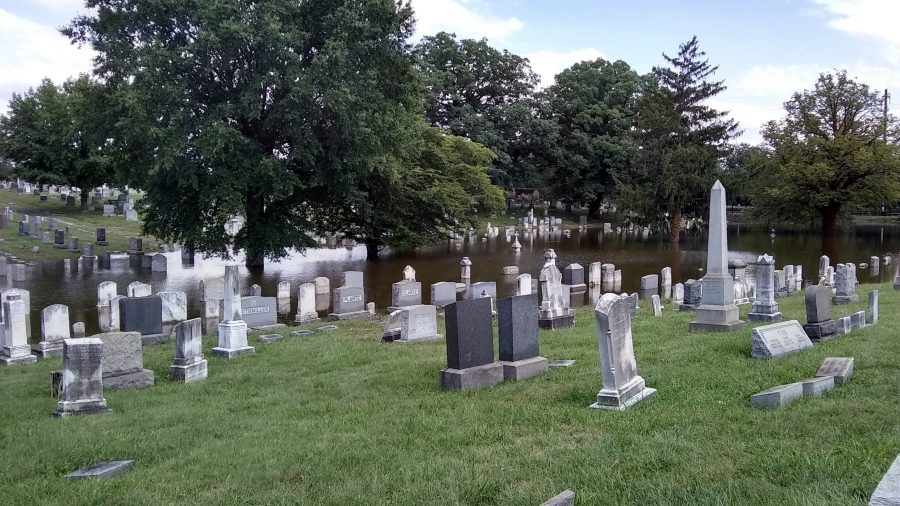