Yesterday afternoon, my buddy Julio Angel Ortiz quote-tweeted this to his Twitter timeline:

I thought about it for a moment or three, and one scene came to mind:

I ran out of characters while typing that, hence some brutal edits that resulted in the double “and” I noticed five seconds after hitting “Tweet.” The longer version of what I was trying to compress down into a tweet:

Contact, the 1997 movie based on Carl Sagan’s only novel, opens with this fantastic three minute long shot — we leave Earth, we pass the Moon, then Mars, then through the asteroid belt, past one of the Galilean satellites, then past Jupiter, and Saturn, the camera speeding up all the way, and soon we’re through the Oort Cloud and passing the Alpha Centauri system, then through the Pillars of Creation, out of the galactic plane where we see the Milky Way in all of its glory, and the the Andromeda galaxy sails past the camera, then we see the galaxies of the Local Group, and soon galaxies are zooming past us as we move further and further into the universe, past super clusters and filaments, and then we hear a girl’s voice, and the camera pans out of her pupil, and we see Jena Malone sitting at her ham radio kit, trying to find someone to talk to.

Contact must have been one of the earliest DVDs that I bought — it’s in the old cardboard snap case that Warners used to use, and it’s old enough that it plays the movie immediately without having to go through a menu — which means it’s been in my collection for close to eighteen years. (My first DVD player was the PlayStation 2, which came out at the end of 2000. My first DVD purchase, as best I can recall, was Free Enterprise, the comedy about two geeks who strike up a friendship with William Shatner.) Inspired by the tweet about the opening shot, I watched it last night. 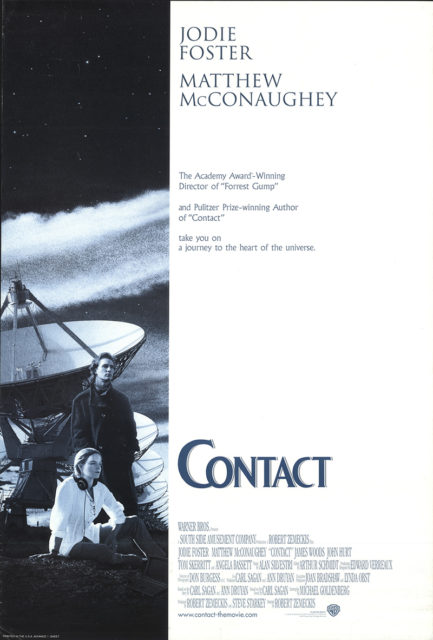 In case the story of a twenty-one year-old movie needs to be explained, Contact is about a SETI researcher (Ellie Arroway, portrayed by Jodie Foster) and her discovery of a transmission from the star Vega. A professional rival attempts to hijack the discovery, political and social fallout from the discovery ensue and are dealt with, a mysterious benefactor of Ellie’s solves one of the problems of the message, a “machine” based on the message is built, and the researcher uses the machine to meet with an alien intelligence that assumes the form and personality of her late father. It’s a very human story that looks at the tension between faith and reason, about why people believe things and why people know things.

There are some places where the film drags (notably the sequence where the film introduces a deranged Jake Busey as some sort of modern day Old Testament prophet), there’s almost no chemistry between Jodie Foster and Matthew McConaughey (more from Foster’s side than McConaughey’s, in my opinion), and occasionally Robert Zemeckis’ direction draws attention to itself, The ending feels cobbled together; I feel like the film was supposed to end with McConaughey saying “I believe her,” but the scene with James Woods and Angela Bassett about the eighteen hours of static on the recording device which prove Foster’s story about wormholes and alien contact had to come after that, but the film couldn’t end with that, hence the final scenes of Jodie Foster with a group of school kids and sitting in the desert at the very end even though they don’t dramatically “flow” from what immediately precedes them, resulting in a closing scene that feels dull.

As a Doctor Who fan, it’s tempting to imagine that John Hurt’s character, the inventor and industrialist S.R. Hadden, is secretly the War Doctor, gone incognito on Earth for a time to prepare humanity for the Time War.

I need to read the novel again. I’ve not since the film came out in the summer of 1997, I’m not even sure what happened to my hardcover copy of the book (as I have the rest of my Carl Sagan library), so this morning I ordered a used hardcover through Abebooks to fill the gap. I remember that it was different, notably in some of the character relationships (Ellie’s mother, for instance, was not dead), the mission itself (which involved, if I recall correctly, five astronauts instead of only one), and the ending of the book (which involved the discovery of a universal message encoded deep inside ? when calculated in base-11).

As I said, Contact still holds up. It’s a thoughtful film, there’s a nice sensawunder to it, and the performances (chemistry notwithstanding) are effective. The use of footage of Bill Clinton grounds the film nicely in the 1990s and gives it a real sense that this could have happened twenty-five years ago. In short, Contact is a nice film to revisit from time to time, reminding us all of when we were younger, more innocent, more hopeful about the future, and more imaginative about the universe.