While Doctor Who fandom this weekend has been preoccupied with questions of predestination and Amy Pond’s flirtatiousness thanks to “Space” and “Time,” the two Doctor Who mini-episodes produced for Comic Relief while waiting for the season debut in five weeks, I’ve had other Doctor Who thoughts in mind, specifically about a two-year-old Doctor Who novel, thanks to this review of “Space” and “Time” by Stuart Ian Burns. 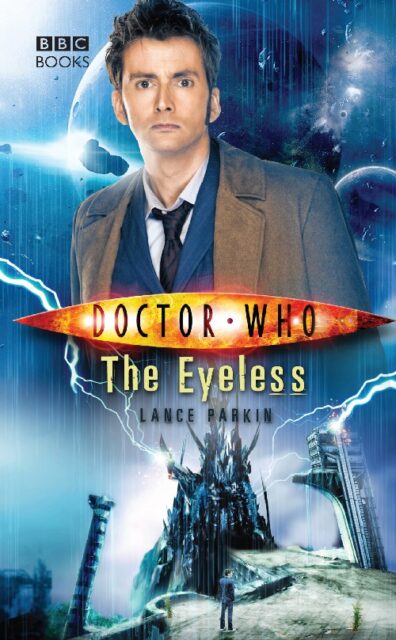 At Christmas 2008, BBC Books published The Eyeless by Lance Parkin. The fan-favorite author of books such as The Dying Days (the first original eighth Doctor novel — and Virgin’s last original Doctor Who novel), The Infinity Doctors, The Gallifrey Chronicles, and Ahistory (a comprehensive chronology to the Doctor Who universe, Parkin’s debut “New Series” novel was highly anticipated. It would be a novel with the Doctor on his own, exploring a mysterious artifact — The Fortress — on a desolate world, while faced with a very dangerous enemy who wants to claim it for their own.

The Eyeless wasn’t perfect, though. I was looking forward to Parkin’s take on the tenth Doctor, and in the end I wasn’t entirely sold on the Doctor’s characterization. The tenth Doctor, who was very much a Tigger-ish character, seemed far too Eeyore in The Eyeless. Yes, I could see him at a dark, somber, and morose point emotionally after “Journey’s End” and the mindwipe of “Donna.” I could even buy the callousness the Doctor shows toward Alsa, one of the characters the Doctor discovers on the desolate planet. But the somberness never felt that it was in reaction to anything. The story that preceeds this story isn’t there to justify the Doctor’s behavior.

In truth, I remember thinking at the time that The Eyeless would have made more sense as a post-Time War/pre-“Rose” ninth Doctor. (Parkin, as I recall dimly from reading the book two years ago, was in the camp that believed that the ninth Doctor did not regenerate immediately prior to “Rose” and that there was a gap of some time between the end of the Time War and the start of “Rose.”) The Eyeless portrays the Doctor cleaning up the mess of a Time War. He’s doing mop-up, because he’s the only person who’s qualified, he’s the only person who can. “Rose,” for instance, is a story of mop-up from the Time War, and it’s not inconceivable that in the decades or centuries after the Time Lock of Gallifrey, the ninth Doctor wandered wandered, cleaning up the mess — the weapons, the refuse — left behind, until the day he met Rose, whereupon he began wandering for an entirely different reason. He was learning how to have fun again.

The tenth Doctor, it always seemed to me, was past that. A mop-up from the Time War doesn’t make sense for him. Something must have led Ten to Acropolis and the Fortress. Something must have put him in this frame of mind. And what that is, I thought, was missing from The Eyeless.

Unless there’s something more complicated going on in The Eyeless than it appears at first glance. That it is about the aftermath of a Time War, but not the Time War everyone familiar with the revived Doctor Who would automatically think of. 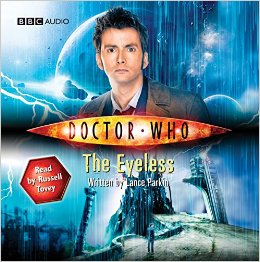 On Acropolis, an artifact appears suddenly and unexpected one day. It’s the weapon of a combatant in a Time War, and when the weapon emerges it destroys an entire civilzation.

The Fortress. Who built it? Why did they build it?

When reading The Eyeless, I bounced back and forth between the Time Lords and the Daleks, that this was a weapon they put in place to win the Time War, before the Doctor burned Gallifrey and ended the War once and for all. Ultimately, I settled on a Dalek weapon; the Doctor, in a late moment when he’s tempted to use the weapon himself, has the word “exterminate” manifest in his mind.

Except, I wasn’t happy with either choice.

Until a chance glance through Alien Bodies suggested a completely different interpretation of who built the Fortress. And where it came from. And what it was for.

The Fortress is clearly a Celestis weapon. In Lawrence Miles’ Alien Bodies, the eighth Doctor and Qixotl (also known as Drax from “The Armageddon Facto”) have a conversation about who the Celestis are — basically, they’re the Celestial Intevention Agency taken to a logical extreme — and how they took themselves out of time. Miles’ The Book of the War expands upon that brief conversation, going so far as to describe the “shadows” that the Celestis create when they took themselves out of time.

This matches with what we see in The Eyeless. The tenth Doctor explains to the council what the Fortress is and how it works in very nearly the same words that Qixotl describes to the eighth Doctor the Celestis and how they removed themselves from time in Alien Bodies. The implication to Alsa is that it’s a Time Lord weapon (when the Doctor and Alsa are talking about the number of alien species, and they come up with different numbers because she’s counting the Fortress as a creation of a different species), which still broadly fits the Celestis, as they are just evolved Time Lords. Further, the “ghosts” inhabiting Acropolis are just like the “shadows” that the Celestis create.

So, if the Fortress is a Celestis weapon from Lawrence Miles’ Time War, how did it turn up in a universe where that War never, ever happened?

We have Dalek-Caan to thank for that.

Dalek-Caan broke the Time Lock when he rescued Davros. Stars started going out, things began bleeding across the universes and timelines, Rose managed to cross the void. An artifact from a timeline that no longer existed could have “bled through” the walls of reality. An artifact like a Celestis weapon.

Which explains why the Doctor has gone to Acropolis to disable the weapon. He knows it shouldn’t be there. He knows a little of what might have happened, he knows a little of who the Celestis could have been, and that little bit is enough to make him the most qualified person in the universe to disable it. Now that he knows that things are bleeding through from other realities thanks to Dalek-Caan’s machinations, he’s going to have to put things right.

So, that’s my theory. The Fortress is a Celestis weapon, and the tenth Doctor ultimately ends up fighting the last battle of Lawrence Miles’ Time War.

And, to be honest, this whole theory — Dalek-Caan, cracks in the Time Lock, things slipping through from pre-Time War time periods &dmash serves to explain pretty well how the Doctor ends up in Trevor Baxendale’s Prisoner of the Daleks.

It’s a weird thing to muse on, two years after the book came out, when there are more important and more pressing Doctor Who matters to consider, like who the Silence is, who was the important man River Song killed, and who is River Song, really? But the idea about The Eyeless has always nagged at me, and while I’ve shared it with a few people, I’ve never really shared it publicly.

Chances are, I’m overthinking it, anyway. 🙂

One thought on “On Doctor Who, the Celestis and The Eyeless”