For this Peanuts fan, yesterday was a doubly significant day — not only did Happiness is a Warm Blanket, Charlie Brown come out on DVD, but I discovered 3eanuts, a “Garfield Minus Garfield”-esque reworking of Charles Schulz’s comic strips.

3eanuts takes the classic four panel Peanuts comic strip, then tosses the fourth panel out the window. The third panel, which was often a dischordant, nihilistic beat, was followed in the fourth panel with a redemptive punchline or sardonic observation. Remove that final panel, and what remains is a bleak portrait of childhood depression and cruelty.

I pulled a volume of Fantagraphics’ The Complete Peanuts off the shelf last night when I got home. It doesn’t work on every strip, but for maybe one in five, it really works. 🙂

I don’t expect 3eanuts to last long; the C&Ds from the Schulz estate are sure to fly and take it down soon enough. Until then, however, 3eanuts is an utterly depressing — and often shockingly hilarious — take on a very familiar world. 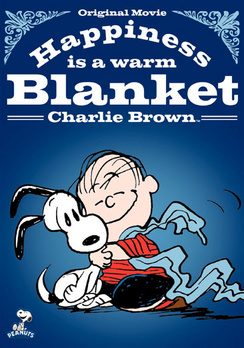 For a more conventional take on the world of Charlie Brown, there is Happiness is a Warm Blanket, Charlie Brown, the new direct-to-DVD animated special. Linus faces a personal crisis when his blanket-hating grandmother comes for a visit. While Linus struggles to find ways to be strong without his blanket, especially when Lucy turns the blanket into a kite and loses it to a gust of wind, the rest of the gang deals with the usual problems — Charlie Brown’s baseball team is nothing but hapless, Schroeder idolizes Beethoven and ignores Lucy’s advances, Sally wants her “Sweet Baboo,” Pigpen is endlessly dirty, Snoopy is scheming.

Happiness is a Warm Blanket feels very familiar — and it should. The script, written by cartoonist Stephan Pastis and Schulz’s son Craig, draws from a number of Peanuts comic strips, including, surprisingly, the very first strip, stringing storylines and dialogue together to create a long-form narrative. The result is a story that feels very true to Charles Schulz and his characters, and the artwork style evokes the look of Peanuts from the early 1960s. Even without music from Vince Guaraldi or Dave Grusin, Happiness even sounds like a vintage Peanuts special. This wouldn’t be out of place next to A Charlie Brown Christmas or It’s the Great Pumpkin, Charlie Brown.

Unfortunately, Happiness is a Warm Blanket, Charlie Brown doesn’t feel original. As I watched the special, I often felt that I had seen parts of it before, and the story, perhaps because it focused so strongly on Linus, didn’t engage me as much as it might have. (Linus is a good supporting character, but I don’t think he makes a good central character.) Happiness felt more like a Peanuts pastiche than an authentic Peanuts special. That’s not to detract from the effort and creativity that went into Happiness — the special hits all the buttons — but it doesn’t feel ambitious.

All the criticisms aside, I liked Happiness is a Warm Blanket, Charlie Brown. Oh, probably not as much as I liked 3eanuts yesterday, but it’s still a nice addition to the Peanuts canon, I’m glad to have the DVD in my collection, and I’m looking forward to picking up kaboom!’s graphic novel adaptation of the story in a few weeks. Happiness isn’t in the upper echelon of animated Peanuts, but it’s also far from the worst.

And I’m hopeful for the next animated special, this one focusing on Snoopy as the World War I Flying Ace. (Which reminds me — must get XBox Live so I can download Snoopy: Flying Ace. Unless it’s now available on disc. I should look into that…)

Yes, these are indeed good times for the Peanuts fan.

2 thoughts on “On the New Peanuts Special, Happiness Is A Warm Blanket”