A month ago Elbow performed an interesting concert for Absolute Radio — they did a live acoustic gig in the crypt of St. Paul’s Cathedral in London which Absolute put live on their website for viewing or listening.

And now St. Paul’s will be known for a concert in which Elbow played the cathedral’s burial crypt. 🙂 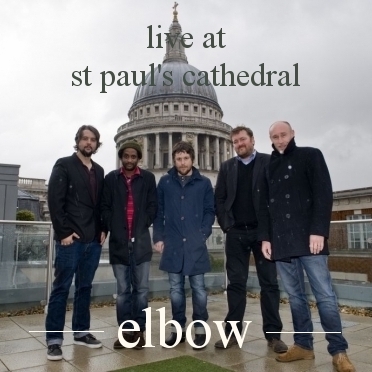 It’s a short set of an hour and fifteen minutes. Twelve songs in total, weighted mostly with songs from their latest album, Build a Rocket Boys!, but also reaching back to the first four albums — three songs from The Seldom Seen Kid, and a song each from Asleep in the Back, Cast of Thousands, and Leaders of the Free World.

It’s a strong performance overall by the band. They open, surprisingly, with “Mirrorball” (a gentle love song from The Seldom Seen Kid) and close with “Scattered Black and Whites” (a song about childhood memories from Asleep in the Back), and the gig sounds absolutely magical. The only duff moment comes early in the set — the version of “Open Arms” they attempt doesn’t quite come off. I love “Open Arms,” which I’ve mentioned before, but the acoustic version lacks the thing that makes me feel the song — the instrumental builds to the anthemic chorus. The lack of the build makes the emotional catharsis feel unearned, and the awkward melody that Guy Garvey attempts in the first verse (which sounds a bit like a fluffed vocal, actually) is distracting in its unfamiliarity.

Set that aside, though, and I have absolutely no complaints about the band’s St. Paul’s Cathedral gig. Their version of “Grounds for Divorce” is downright country-fied, which is really cool. Guy Garvey has a nice rapport with the audience; at times he talks about the uniqueness of the venue, at other times he talks about the quality and comfort of socks and Birks. He does a little intro for most of the songs, explaining their meanings — “Switching Off,” for instance, is about the last thought before death. (I’ve always loved this song, but I had absolutely no idea what it was about.) This is the band I love, at the top of their game.

Listening to the gig (as I did again today), makes me wish that there were a “proper” live Elbow album. I love The Seldom Seen Kid: Live at Abbey Road, but that’s an utterly atypical Elbow concert, with the band backed by the BBC Concert Orchestra. The iTunes Live From London EP is nice, but it’s an abbreviated acoustic set. Elbow can be a little more… raucous than that. I should know — I saw them two years ago, and I’ll be seeing them again in September. A “proper” Elbow live album would be fantastic. For the nonce, though, this set makes a nice addition to the “canon.”

(And no, I’ve not seen Elbow’s set from this year’s Glastonbury Festival. I’ll start hunting for it online tomorrow.)

If you’ve any interest in Elbow, check out the St. Paul’s Cathedral concert. The band is in great form, their selection of material is interesting, they produce some genuinely awesome music, and absolutely none of it has anything to do with Alan Moore. :h2g2: