Though its existence has been known for weeks, today it became official with a press release and a trailer — later this year, Warner Bros. Interactive Entertainment and TT Games will be releasing LEGO Lord of the Rings, a video game that transports J.R.R. Tolkien’s epic story of good’s struggle against the forces of evil into a world of colorful plastic bricks.

Let’s look at the trailer:

I was curious, most of all, to see what the LEGO Balrog would look like. And then to see it belch&#8253 Yes, the LEGO video game humor is one-hundred percent intact. 🙂

The sets for LEGO Lord of the Rings are out; I saw them at Toys R Us two weeks ago, but I’ve yet to pick any of them up. It’s not for a lack of desire. It’s really down to money. That’s what everything comes down to, sadly. :-/ 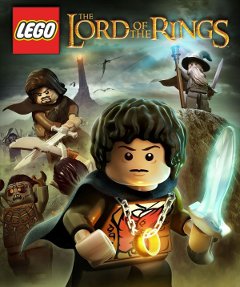 In any case, on a brighter note, let’s take a look at the press release that announces the game:

Explore Middle-earth in an epic and thrilling LEGO videogame adventure for the entire family! Warner Bros. Interactive Entertainment, TT Games and The LEGO Group today announced LEGO ® The Lord of the Rings™, the latest addition to the wildly successful LEGO videogame series that brings to life the legendary fantasy saga by J.R.R. Tolkien.  The game will be available for the Xbox 360® video game and entertainment system from Microsoft, PlayStation®3 system, the Wii™ system, the Nintendo DS™ hand-held system, the Nintendo 3DS™ hand-held system, PlayStation ® Vita system and PC in Autumn 2012.

“We are huge aficionados of The Lord of the Rings franchise and are incredibly excited to put our special LEGO family-friendly touch on this classic fantasy adventure,” said Tom Stone, Managing Director, TT Games. “We’ve taken what fans are familiar with and love about The Lord of the Rings films and combined it with the playful LEGO style, which makes the story and gameplay accessible to gamers of all ages.”

LEGO The Lord of the Rings takes players along on the adventures of Frodo Baggins and his unlikely fellowship as they set out on a perilous journey to destroy The One Ring and save Middle-earth.  Kids, tweens, teens and parents can traverse the Misty Mountains, explore the Mines of Moria, knock on the Black Gate of Mordor, and partake in epic battles with Orcs, Uruk-hai, the Balrog and other fearsome foes while harnessing the humour and imagination of LEGO gameplay to solve puzzles and explore Middle-earth.  Players will take on the form of their favourite members of the fellowship – Frodo the Hobbit, Aragorn the Ranger, Gandalf the Wizard, Legolas the Elf, Gimli the Dwarf, Boromir a Man of Gondor, and Frodo’s Hobbit friends Sam, Merry and Pippin – as they relive the most momentous events from the films.

Though the press release gives my inner editor hives — I see places where and semi-colons and commas are desperately needed, and I think Middle-Earth is properly spelled with two capital letters — and I’ve little doubt that Tolkien would be appalled at its very existence, I am utterly and unexpressably excited for this game.

As for the game, hopefully it won’t take me six years and five months to finish the game to my satisfaction as it did with LEGO Star Wars. Hopefully. Of course, I’ve not yet finished Lord of the Rings: War in the North yet, either; I’ve become stuck at the siege of the Dwarven fortress of Nordinbad. Perhaps I’ll return to that this weekend…