It’s safe to say that after the fourth issue of Star Trek: The Next Generation/Doctor Who: Assimilation2 that I was ready to give up on this series. My two favorite science-fiction franchises, sharing the same story! How could it possibly go wrong? But, just as the Chicago Cubs find new and interesting ways to snatch defeat from the jaws of victory, Assimilation2 was taking something that should make every Star Trek and Doctor Who fan feel excited like they’re thirteen again and making it plodding and underwhelming. After four issues of that, I had no expectations for the fifth issue.

Let’s just say that the fifth issue is a stay of execution for Assimilation2. It’s not great, it has the same problems as the previous four issues, but it actually does something and it does it competently even if it’s unsurprising in its development.

When we left Captain Jean-Luc Picard and the eleventh Doctor on the bridge of the Enterprise-D, the Borg-Cybermen alliance had shattered, and the Borg were asking for Picard’s help — or, rather, Locutus‘ help — in defeating the Cybermen. Picard, however, rejected the Borg’s entreaties out of hand because of his assimilation at the hands of the Borg, and he brushed off the Doctor’s insistence that the Cybermen posed a greater threat than the Borg. 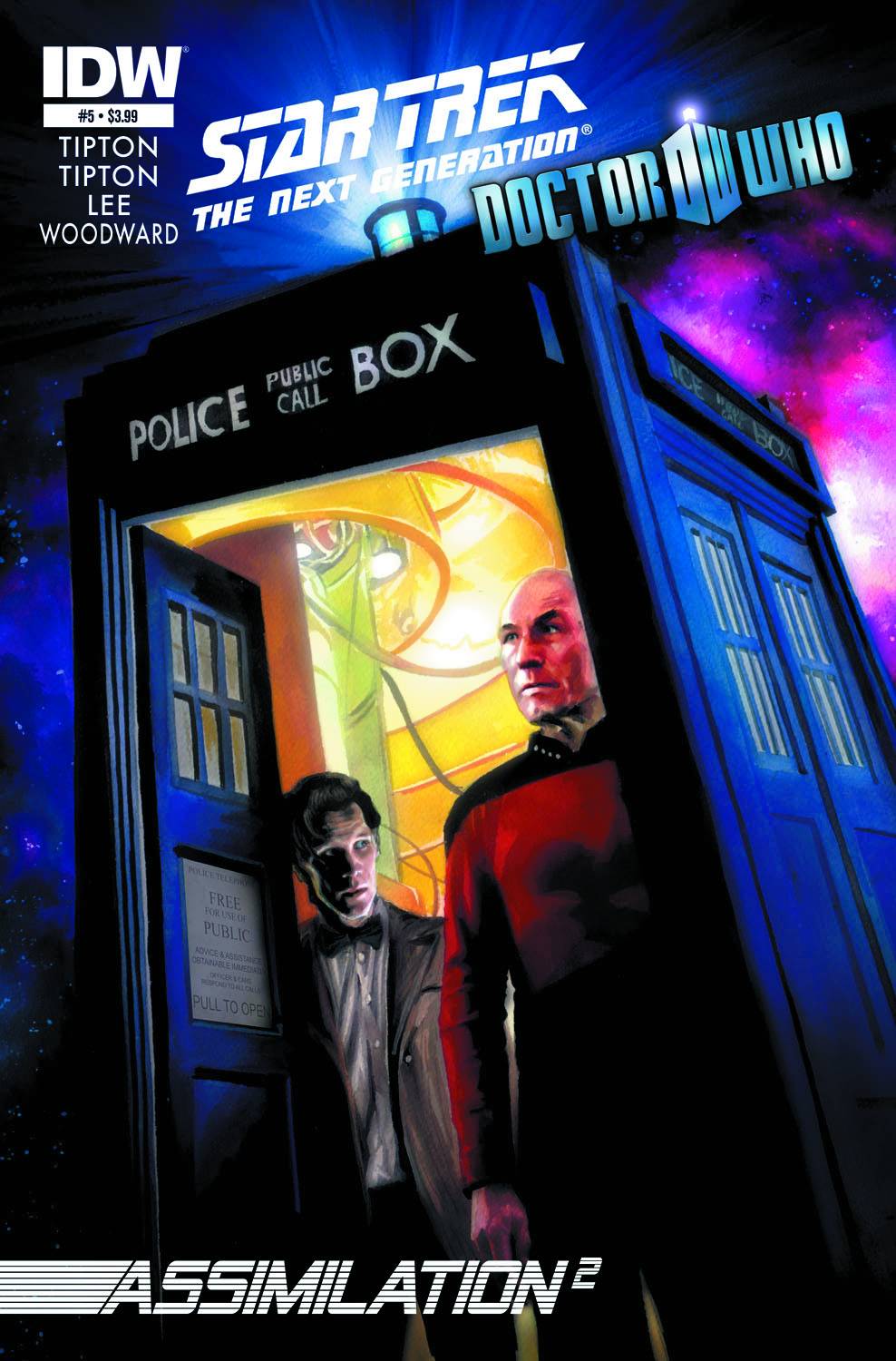 Everything that happens in this issue I expected. When writing of the fourth issue two weeks ago, I said that that the Locutus twist “seems like something designed solely to create more conflict between Picard and the Doctor as the Doctor clearly thinks that Locutus is a good thing, not knowing that this would actually be a bad thing” and that “I assume that the Doctor will take Picard into the future (much as he did to Sarah Jane Smith and Marcus Scarman in ‘Pyramids of Mars’) to show Picard the result of not cooperating with the Borg.” Both happen, and they’re tied together with a flashback, conversations, and more conversations. If this were a Star Trek: The Next Generation episode, we have a clip sequence, no guest cast, and a lot of standing set use, particularly Picard’s Ready Room. In short, we have ourselves a budget-saving bottle episode issue here, and it’s one of the passive, talky ones at that.

Yet, it mostly works. And we get our first sign that there’s actually a Doctor Who story going on here as well as the Star Trek story.

Is there anything new to the conversations? No. Guinan once again tries to push Picard to trust the Doctor’s judgment. Picard once again states his firm decision not to work with the Borg, firmly. Rory and Amy once again have pointless conversations with Dr. Crusher and Counselor Troi so that we can pretend the Ponds have a role to play in a story that has no narrative room for them. And then Picard finally decides to listen to the Doctor — and then suddenly we’re in a Doctor Who story.

The Doctor’s trick of taking a recalcitrant local on a trip into the future isn’t new. The fourth Doctor does it to Scarman in “Pyramids of Mars.” The Doctor of The Infinity Doctors takes the Sontaran and Rutan leaders into the future to show them the result of their eternal conflict. And here, the Doctor takes Picard for a little spin in the TARDIS, visiting both Star Trek and Doctor Who planets, showing Picard the remorseless march of the Borg-enhanced Cybermen across the galaxy, decade by decade, and the consequences of inaction. At last, five issues in, with the six pages of the Doctor in the TARDIS it beings to feel as if the promise of the series is about to be fulfilled.

But getting to this point isn’t perfect. The bits with Guinan feel, like they did in the fourth issue, like nothing more than reprises of other Guinan scenes. Amy’s conversation with Picard is reminiscent of her conversation with Kazran in “A Christmas Carol” and Lorna Bucket in “A Good Man Goes to War.” The conversation she and Rory have with Troi doesn’t feel authentic at all; what reason do Troi and Crusher have to trust anything about the Doctor and his companions? And Picard’s final decision in the issue doesn’t feel like a decision at all because it never feels like a choice. The dubious plotting of the series, which Stuart Ian Burns has addressed in his reviews of the series continues unabatted, then.

The artwork is also variable. We continue with the Gordon Purcell and J.K. Woodward team from the previous issue, but this issue’s artwork doesn’t appear as rushed or unfinished as previous issues. There are also some sequences that look as if they’re Woodward flying solo, in particular most of the Picard-on-the-TARDIS sequence. Purcell’s Karen Gillan likeness is better than in the previous issue, though there are panels where she looks more like a titian-haired Anne Hathaway. Purcell’s Arthur Darvill likeness, however, is atrocious; if anyone can tell me who that is on page 11, please let me know.

Still, the visuals of Picard’s journey into the Cyber-ized future are fabulous.

One problem with the Cybermen and their threat is the series hasn’t made the threat posed by the Cybermen and Borg credible. To date, they have been conceptual rather than actual threats, and on the basis of nothing whatsoever the Doctor is able to explain to Picard what the Cybermen want and how they’re going to accomplish it. The series has an unfortunate habit of telling and not showing. The Away Team mission in the previous issue gave the characters some information, but there should have been some indication of how the Doctor arrived at his conclusions. Of course Picard doesn’t trust the Doctor’s assertions; I don’t trust the Doctor’s assertions.

So why do I say it “mostly works”? Two reasons.

As absurd as the story is, I avidly turned the pages to see what would happen next. My inner thirteen year-old, who would have loved to see Colin Baker striding across the bridge of the Enterprise-D, loved this.

And, I honestly have no idea where the story is going from here. In broad strokes, this series has been ridiculously easy to predict. I suppose that if I were looking for a plot twist in issue #6, it would be a betrayal by the Borg, but I don’t know how to get there from here. Basically, at this point, Assimilation2 is capable of surprising me.

I was fully prepared, before I read the issue, to post a JPG of Enchanter Tim with the caption “Get on with it!” as the sum total of my thoughts on this issue. However, this issue worked for me, in ways that previous issues did not. I’m not to the point of liking Star Trek: The Next Generation/Doctor Who: Assimilation2 yet, but neither am I on the verge of dropping the story unfinished. The fifth issue, while not perfect, was satisfying enough to earn it a stay of execution.

I am, curiously, optimistic.