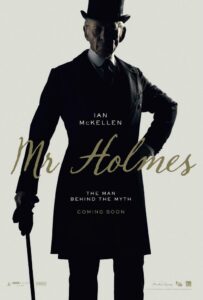 The story translates translates well. Mr. Holmes is a good adaptation of the novel’s storyline and all three of its narrative threads, with changes that are largely appropriate for translating the book to the screen. Mrs. Munro, the housekeeper played by Laura Linney, has a more prominent role and more character moments. And Roger, Mrs. Munro’s ten-year-old son (played by Milo Parker, who looks like a very young Thomas Sangster) has a deeper relationship with the movie Holmes than he does with the book’s Holmes — surrogate son, friend, assistant, confidant, pupil.