As the company has done for a number of years, a Christmas tree was put up in the lobby and, a few days after Thanksgiving, Angel Tree stockings were hung.

I had decided long ago to participate in the Angel Tree program this year and, when I was passing by the lobby area on other business and saw they were up, I stopped and spent a few minutes deciding upon which one to pick. 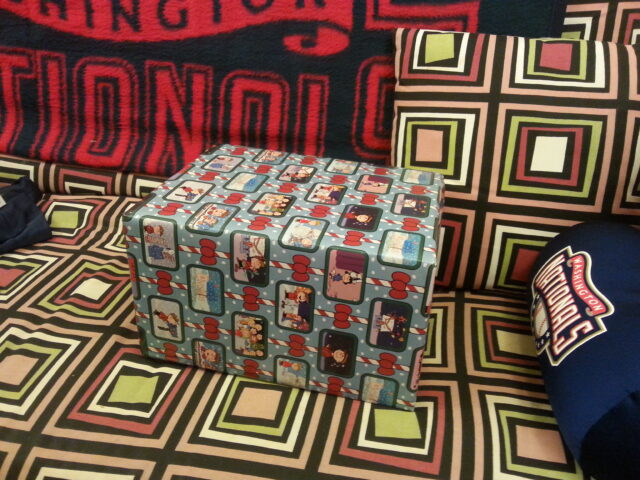 Last week was… not the best. I should clarify. It wasn’t bad. It was simply stressful. And hectic. And tense. And all of the things that a week that where the catalog and orders go to press usually is. Thankfully, the week ended with the Nerd Prom — the Employee…

I chose, similarly to last year, a boy, eight years-old. I signed my name to a sign-up sheet on the front desk, and, with a spring in my step, back to work I went.

There wasn’t any guidance with the stockings as there were with the Angel Tree tags a few years ago. Those tags indicated ideas for toys and clothing sizes. I had to operate blindly, but I was fine with that. You see, I already had a half-dozen items at home for my Angel Tree recipient. I wouldn’t say I had a plan for the recipient, per se, but I knew this was something I wanted to do, and since I knew it was something I wanted to do I saw no reason not to start buying items. And if there had been guidance, the recipient was still going to receive the things I had bought.

I didn’t have a budget. Instead, I was going to buy strategically. Like last year, I was going to do a box of stuff. If I was out at a store and I saw something that intrigued me, I would buy it. In October, then, I started buying items here and there, so by the time the stockings were hung on the tree I had a box of stuff ready to wrap.

That was my strategy, then, and when I was done the recipient would receive a wrapped box, he would unwrap it to find the box was filled with more wrapped boxes, and he would then unwrap another half-dozen interesting things. An eight year-old, receiving an Angel Tree package from the Salvation Army, probably wouldn’t be looking at the brightest Christmas. Every little bit helps.

With the Angel Tree gifts due at the office on Monday morning, Wednesday night after work I sat down and started wrapping. I gathered up the wrapping paper out of my coat closet — most of it Peanuts related — and found my Scotch tape. plugged in my Christmas tree, and queued up Christmas-themed episodes of The Thistle & Shamrock to really get the festive spirit going. Time to go to work. 🙂

This is a complete overview of the items I had on hand:

For those who wonder about these things, the part of my living room bookshelf you can see holds part of my Beatles library. (There are more Beatles books in my bedroom. And my dining room. I have Beatles books everywhere.) From the left, there’s Philip Norman’s Shout!, then Mark Hertsgaard’s A Day in the Life, and next to it is Bob Spitz’s biography of the Beatles. Mark Lewisohn’s Tune In is on that shelf, as is Ray Coleman’s Lennon. The missing book (seven spots over from the left) is Ian McDonald’s Revolution in the Head Third Edition as that’s presently in my bedroom; I was rereading the entries on “Free as a Bird” and “Real Love” recently due to the 15th-anniversary of George Harrison’s death.

Let’s take a look at the items individually, and I will muse upon them as I go.

First up, a Rey puzzle based on Star Wars: The Force Awakens.

I also had a Finn puzzle. The Rey and Finn puzzles were actually the last two items I bought for the package.

One of the first items I bought was an Australian collection of Peanuts comic strips. I found this at Ollie’s Bargain Outlet, and it was all of two dollars. “This is nice,” I thought, and I thought it would make a good Angel Tree gift.

Also found at Ollie’s, but not on the same trip, nor the same Ollie’s, was this Matchbox-esque car! They had all of these baseball die-cast cars, and I couldn’t find any for any team I liked. If I wanted the Phildelphia Phillies or the Texas Rangers or the Miami Marlins or the Houston Astros, they had plenty of those. Cubs or Nationals? Heaven forfend! But they also had this 2012 World Series car. “Why not?” I said. “Kids love Matchbox cars.” And yes, I’m well aware that this one is by Lionel, not Matchbox. 🙂

Next up, a coloring book! I picked this up on the same Ollie’s trip where I picked up the Peanuts collection.

Coloring books require crayons! This was one of the last items I bought. I picked these up at the 5 Below across the street from Diamond’s offices. 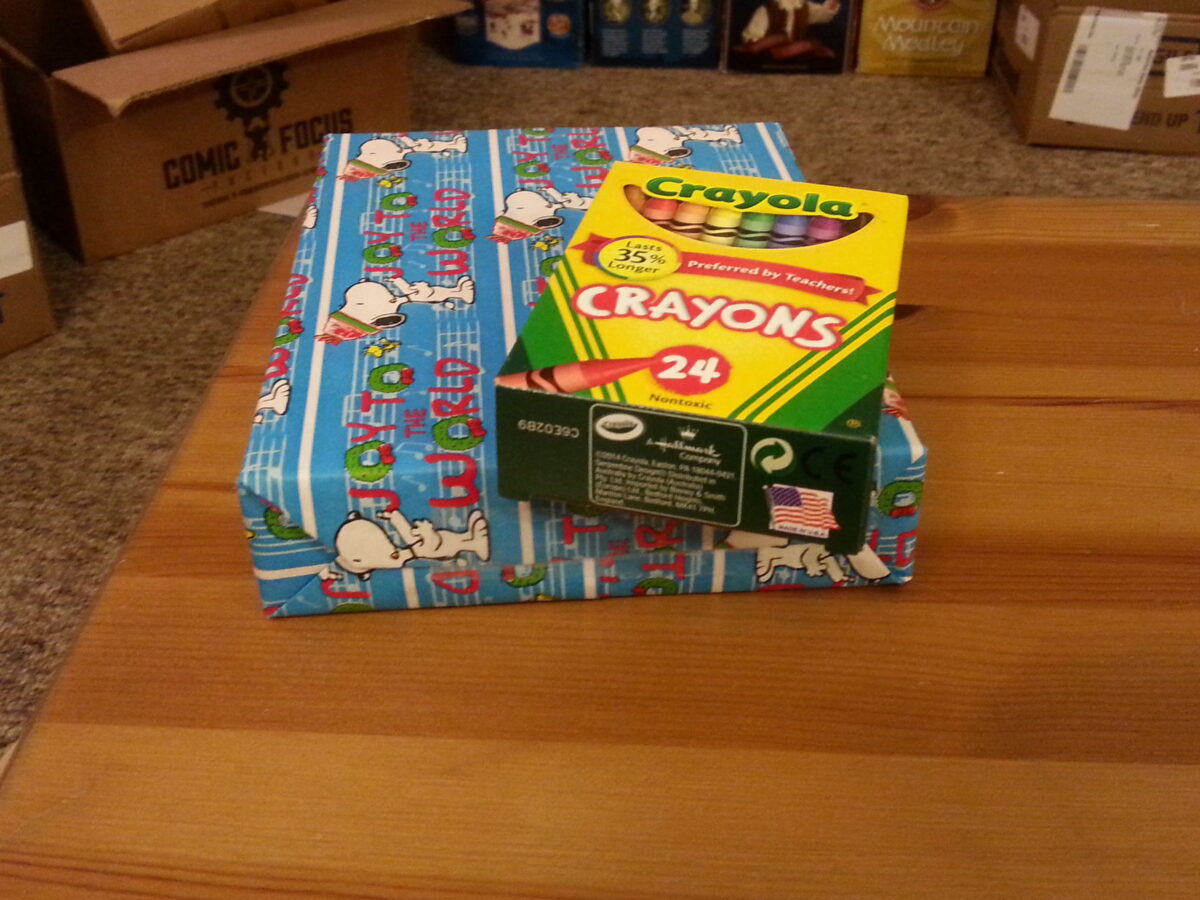 A DVD! This is the Babar movie from a few years ago. (Come to think of it, I’m surprised there hasn’t been a live-action Babar movie along the lines of the recent Paddington Bear.) When I was young, I loved Babar, so this was an easy choice. I think it was three dollars at Big Lots.

Kids need stuff to build with, and I was intrigued by this Mega Bloks set. This also came from Ollie’s, and it was the most expensive item in the box (at seven dollars). I got this at the same time as the World Series Lionel die-cast car.

And we need a book!

Also from the Ollie’s trip where I get the Mega Bloks set, I found a book on baseball for young readers — Michelle Green’s A Strong Right Arm, a biography of Negro League pitcher Mamie Johnson, a woman who played for the Indianapolis Clowns in the 1950s. I read it after I bought it — it’s not very long and it’s written for young readers — and I quite enjoyed it. The book talks about growing up in the segregated South in the 1940s, discovering one’s talents, and pursuing one’s dreams. Though I don’t know who is receiving the book, I saw important messages in the book for everyone.

And with that, my wrapping was done!

Oh, I still had the Sega All-Stars die-cast of Tails, but I had no idea how to wrap that due to the shape of the package and, as I would soon discover, I wouldn’t have had room for it in the box.

Then I selected a Christmas card out of my collection and began to pen a letter from Santa Claus.

This is something I’ve done with the two Angel Tree packages I’ve done. I was inspired by J.R.R. Tolkien’s Letters from Father Christmas, and the first two I did were quite elaborate. They weren’t illustrated like Tolkien’s — I’m a shite artist — but I spent time talking about what life was like for Santa Claus.

For this card I wrote about how the elves were loading the toys in the sleigh, how the gnomes were making the final pre-flight checks, and how Mrs. Claus was shoving Santa out the door. Christmas, after all, is the one time of year he gets him out of the house. 🙂

The card written, I filled the Diamond shipping box, used a little bit of filler paper, taped it up, and wrapped.

Again, for people who care about such things, the bookshelf to the right is my graphic novels bookshelf. It’s largely alphabetical, and you can see my Hellboy and Invisibles collection at the top (there’s a Batman shelf above it), Lucifer and The Maxx on the next shelf, and my Sandman boxed set below that. On the bookshelf to the left, there are Doctor Who books visible at the top (with a shelf of Sherlock Holmes books above that), Fritz Leiber’s Fafhrd and the Gray Mouser books (in their Dark Horse editions) and Michael Moorcock’s Elric books (in their Del Rey trade paperback editions of a few years ago) on the shelf below that, and Fantagraphics’ Peanuts Every Sunday collections and my Harry Potter collection, with a selection of Panini’s Doctor Who collections in between.

I didn’t keep track of what I spent, but it was right around thirty dollars.

I killed one roll of wrapping paper. I had bought a new roll just in case — Peanuts, unsurprisngly — then never used it. The roll of Scotch tape was much diminished when I was finished. And I limited myself to a single bottle of Highland Brewing‘s Oatmeal Porter as I wrapped.

Satisfied with my work, I sat on my couch and listened to Archie Fisher talk about Christmas in Glasgow on The Thistle & Shamrock.

Thursday morning I took the package into the office and dropped it off with Human Resources. I had done my duty, I had brightened a stranger’s Christmas (or would, two weeks hence), and I could get on with the business of sending my publications to press.

Publishing. It is merciless with its deadlines. 🙂