Found in the Grass

Wednesday night after work, I went to a baseball game. It was the week of publishing deadlines, Wednesday had been a long and often frustrating day, and the Baltimore Redbirds, a team in the Cal Ripken Collegiate Baseball League, a summer wooden bat league for college students, was playing their home opener in Towson. It was something that I would have liked to go to, but the demands of work made that unlikely, only in mid-afternoon it looked like it might be possible with a little luck and a bit more pedal to the metal, so to speak, and I was able to leave the office at 6:30 instead of the more typical 7:30 or 8 during Hell Week. 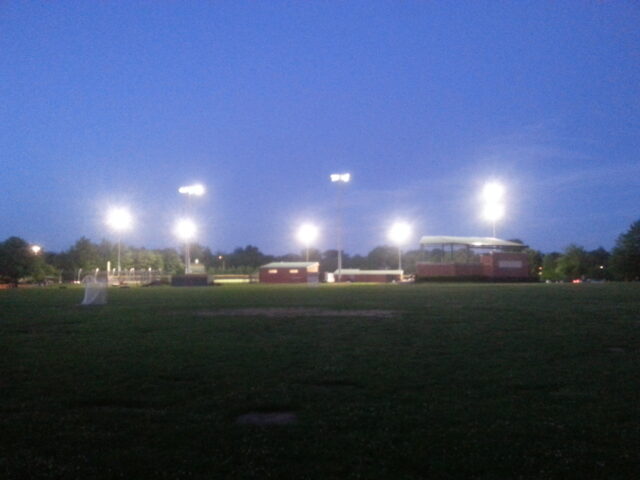 The crowd was sparse — maybe fifty people attended? — but the baseball itself was pure.

After the game, walking back to my car, I found a foul ball in the grass. In the late innings, someone had smacked a ball up and over the grandstand, and there it was, just sitting there in the twilight. “This ball needs a home,” I said. It was the first foul ball I’d ever found . I had my hands on one at a Harrisburg Senators game in 2014, but I couldn’t grasp it; it bounced off my palms and darted away, leaving my fingers stinging for a day.

I put it on my dining room bookshelf, next to a Harrisburg Senators victory ball, which isn’t really a baseball, though it looks like one. (It’s a squishy ball the Senators players throw into section 207 after a victory. Another relic of 2014.)

For those who care about such things, the books on my dining room bookshelf that are visible, from left to right: