Matt Frewer was the headlining guest this year at Farpoint, an annual science-fiction convention held near Baltimore, this weekend. While I know that most people wanted to meet him because of Max Headroom or roles in other shows like Eureka, Orphan Black, and recently Altered Carbon, I really wanted to meet him because of Doctor Doctor and his Sherlock Holmes television movies.

On Saturday, I brought a DVD of The Hound of the Baskervilles/The Case of the Whitechapel Vampire to the convention and asked him to sign the sleeve for me. I don’t normally get things like this signed. Scratch that. I never get things like this signed. In twenty years of going to conventions, this was the first time that I ever asked an actor for an autograph on anything. I won’t say that I got a “Whoa” from him, but it wasn’t the usual Max Headroom stuff he probably has to field from fans, and we were able to talk for a few minutes. I know that Frewer’s Holmes isn’t regarded fondly by many Holmesians, but I’ve always enjoyed his films, and I said to him that Whitechapel Vampire was, of the four films, my personal favorite and, honestly, the one I consider the best. He said that he really enjoyed making these.

He personalized the signature, which I didn’t ask him to do, and I geeked out a bit. I thanked him for coming, and we shook hands. 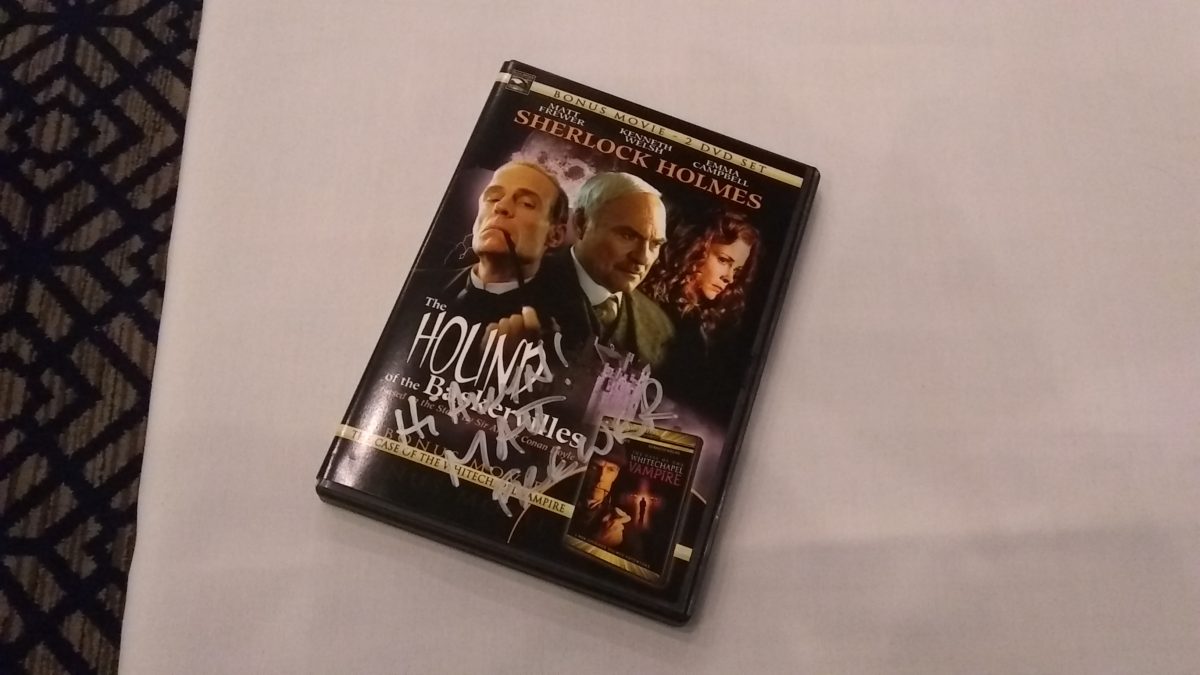 During the Q&A with Frewer that afternoon, Kathleen David asked Frewer what his inspiration for his take on Holmes was. Frewer began by saying that “many actors have ridden this horse,” and he said he didn’t want to recreate another actor’s performance. When he really thought about the role and how Sherlock Holmes is always the smartest man in the room, he decided to base his interpretation of Holmes on his father-in-law, a prominent, very skilled, and very brilliant eye surgeon. “He had the ability to make you feel dumb because you didn’t listen to him.”

I had intended to ask Frewer the same question, so I asked him instead about the Max Headroom television hijack — in 1987, somewhere wearing a Max Headroom mask hijacked two television signals in Chicago. As the actor behind Max Headroom, I wondered what he thought, and he said, “I thought it was great. It was very much in the spirit of Max Headroom. It was like the Occupy Wall Street of its time.” I also asked if he was questioned by law enforcement, and he said that he wasn’t.

Someone else asked him if he would reprise his movie role of Moloch in the Watchmen television series Damon Lindelof is developing is HBO. Frewer said that he absolutely would if he’s asked. He loved working on Watchmen, and he loved working with Zach Snyder. He hadn’t read the graphic novel so all he had to go on was the script, and when he asked why Moloch had those ears of his, he said that he and Snyder sat down and worked out a backstory for Moloch. “We decided that, when he was born, the doctor pulled on his ears during the delivery, stretching them out, and the pain from that is why he was pissed off with the world.”

It was great to meet and converse briefly with an actor I’ve admired for thirty years and one whose performance as Sherlock Holmes I really enjoyed. 🙂