Tuesday night, I saw a woman pitch in a baseball game!

It was deadline week at work, perhaps I could have taken some editorial items home to write and get them done. I didn’t. Instead, after work I drove down to Calvert Hall for baseball game.

It wasn’t the Baltimore Redbirds playing, though; the Cal Ripken League was on their all-star break. The game was between the Putty Hill Panthers and the Bethesda-Chevy Chase Big Train Stars of the Maryland Collegiate League.

As I’ve said before, these games can be difficult to follow — there’s no announcer, no score board. The one I attended where I was able to keep score (the game ended on a mercy rule), it was due to some diligence and preparation on my part; I went armed with player rosters off the website, I kept a “map” of the numbers in the field, and I was able to piece the line-ups together from that. In short, to watch one of these games requires patience and attention, much like the old days of baseball, long before I was born.

I did not do that Tuesday night because, first, the BBC Big Train Stars didn’t have their uniform numbers listed on the league’s website (which would have made trying to figure things out rather difficult, especially with my idiosyncratic system), and, second, they were playing a doubleheader that started at 5:30 but I didn’t leave the office until 6:30, so I was going to miss a good chunk of one game and, depending on how many innings were played, I might have missed some of the second. I was going to go, watch, and relax. It’s deadline week, and I wanted something relaxing like a stress-free baseball game. 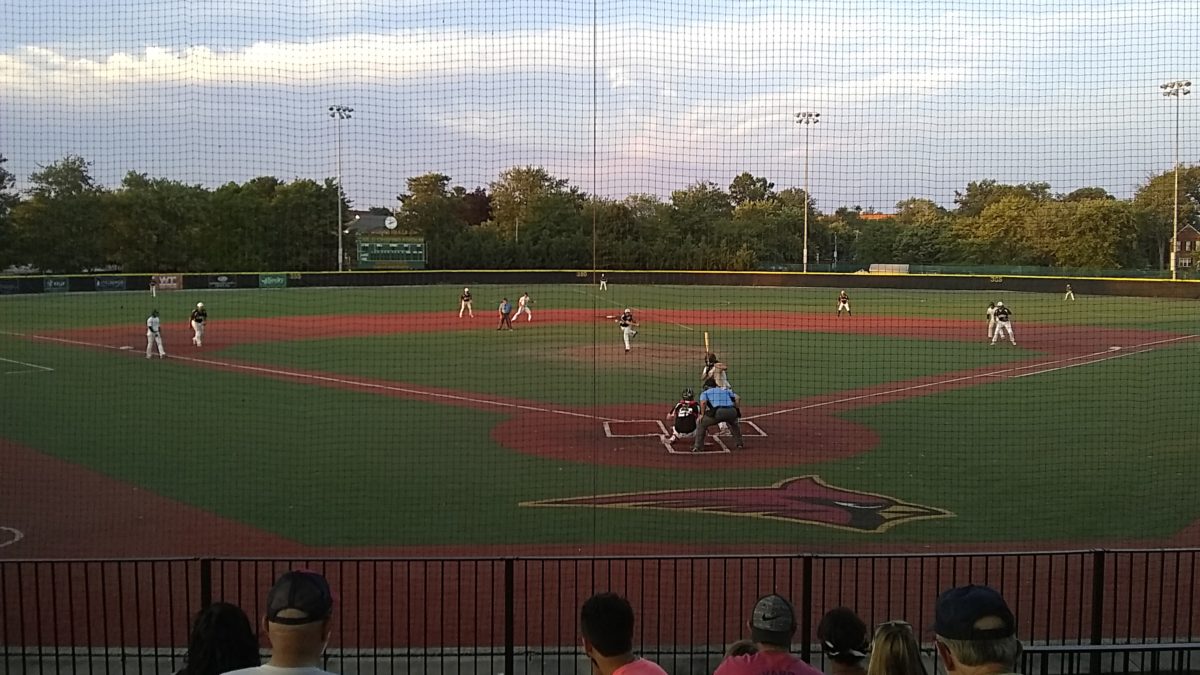 In the second game, in either the fourth or the fifth inning (I wasn’t entirely sure at that point), a pitcher for Bethesda jogged out from the bullpen and took the mound. One batter got on base. Then a second. Then the ball was hit back to the mound, and rather than throw the ball to first the pitcher threw it to third.

Had there been more than about twenty people in the stands I might not have noticed what I heard next. It came from the Bethesda dugout, apparently an admonishment from a coach to one of the players to keep his opinion to himself.

“Let her field her own position.”

“Her.” The word “her.” It caught my attention. And then I looked at the pitcher. Really looked.

“Oh my, I’m seeing a woman pitching in a baseball game!” 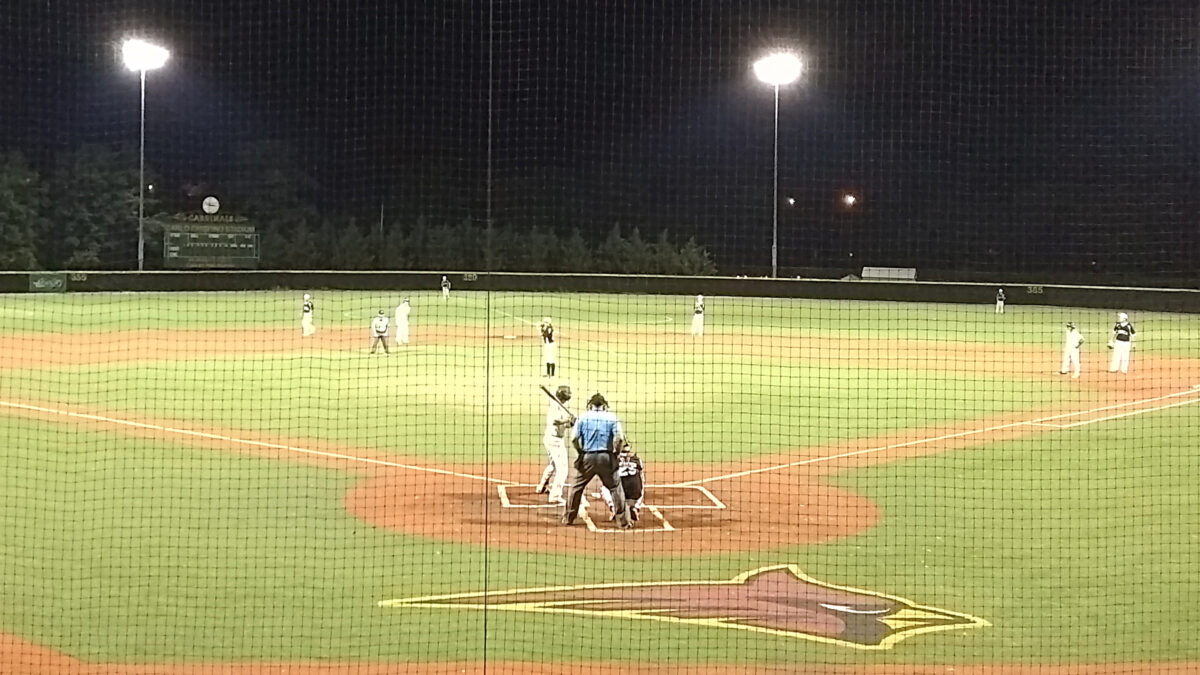 Her name, as far as I can tell, is Kelli Jenkins, a student at St. Mary’s College in southern Maryland.

Was she any good as a pitcher?

Well, it wasn’t a good outing for her.

Some caveats. One, I’m not good at telling whether a player is good or not. I have no idea what a scout looks for. Two, I have no notes from her outing. I’m going off of memories and notes jotted down after the fact. Three, I wasn’t playing close attention to the first two or three batters she faced because I didn’t know a pitcher was a she. Overall, though? It didn’t seem like a good outing.

She got two outs, but she also gave up several runs, loading the bases along the way. She had issues locating her pitches, and the defense behind her did her no favors. (Not unique to her, I should note. They botched plays for the pitcher after her, too.) However, she also threw an amazing 12-6 curve ball that came in high until the bottom completely dropped out of it. If she could locate that more often, it could be an effective and devastating weapon.

She was pulled for another pitcher, and then the game ended on the application of a mercy rule when that pitcher let in several more runs.

When she was taken out of the game, I think everyone in the stands at Carlo Crispino Stadium clapped for her. It was certainly the most noise that crowd of twenty had managed in the time I was there. 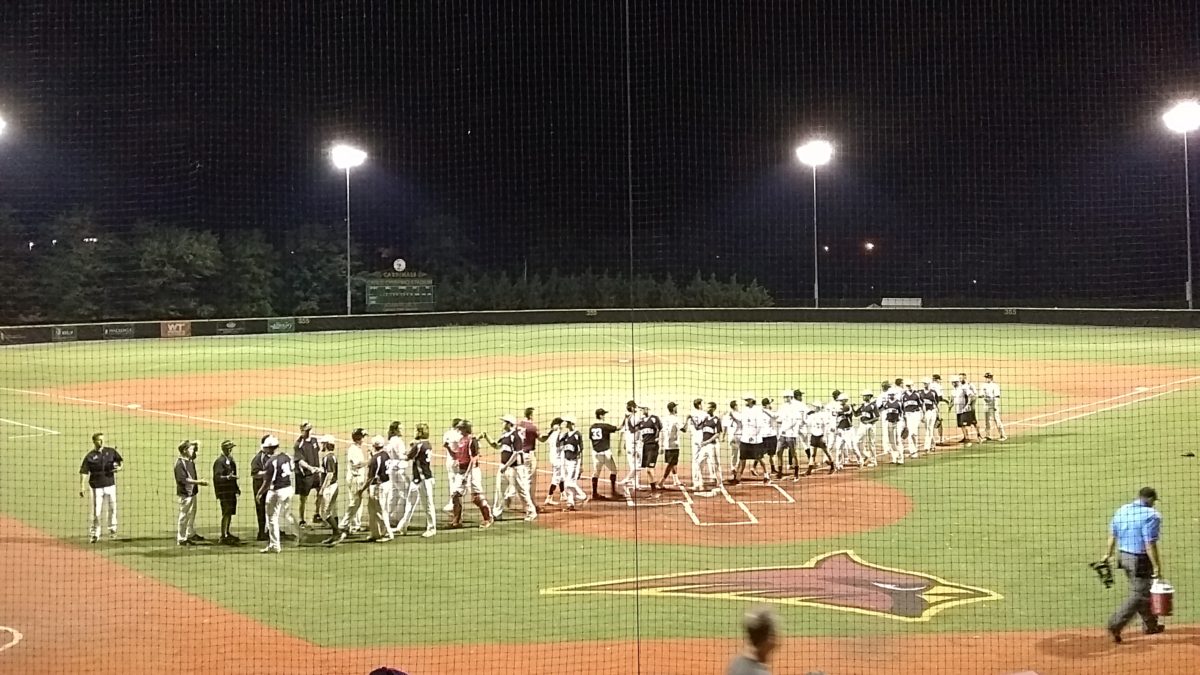 Women have played baseball almost since the beginning of the sport. I have a picture of the 1913 New York Female Giants hanging on the wall of my office. I’ve watched A League of Their Own many times. I gave my niece a biography of Mamie “Peach” Johnson, a Negro League pitcher in the 1950s with the Indianapolis Clowns, for Christmas a few years ago. The Harrisburg Senators signed Eleanor Engle to a contract to play shortstop over fifty years ago. A number of women have pitched in the independent leagues in the last decade. Eventually, someday, a woman is going to be drafted by a major league organization and she’s going to be assigned to an affiliated minor league team. She might not be the first woman to reach the majors, but the woman after her, or the woman after her, or the woman after her, will be.

It will happen thanks to women like Kelli Jenkins, who have the dream of playing baseball and who, in pursuing that dream, inspire others. A woman will step into the batter’s box, she’ll throw a pitch.

That day will be awesome. 🙂