A week and a half ago I discovered Adolph Sachse’s “bird’s eye view” map of Washington, DC, circa 1883-1884, and I was able to find where my ancestors lived in Washington from the Civil War to the mid-1880s.

There was something else I was interested in. Swampoodle Grounds. 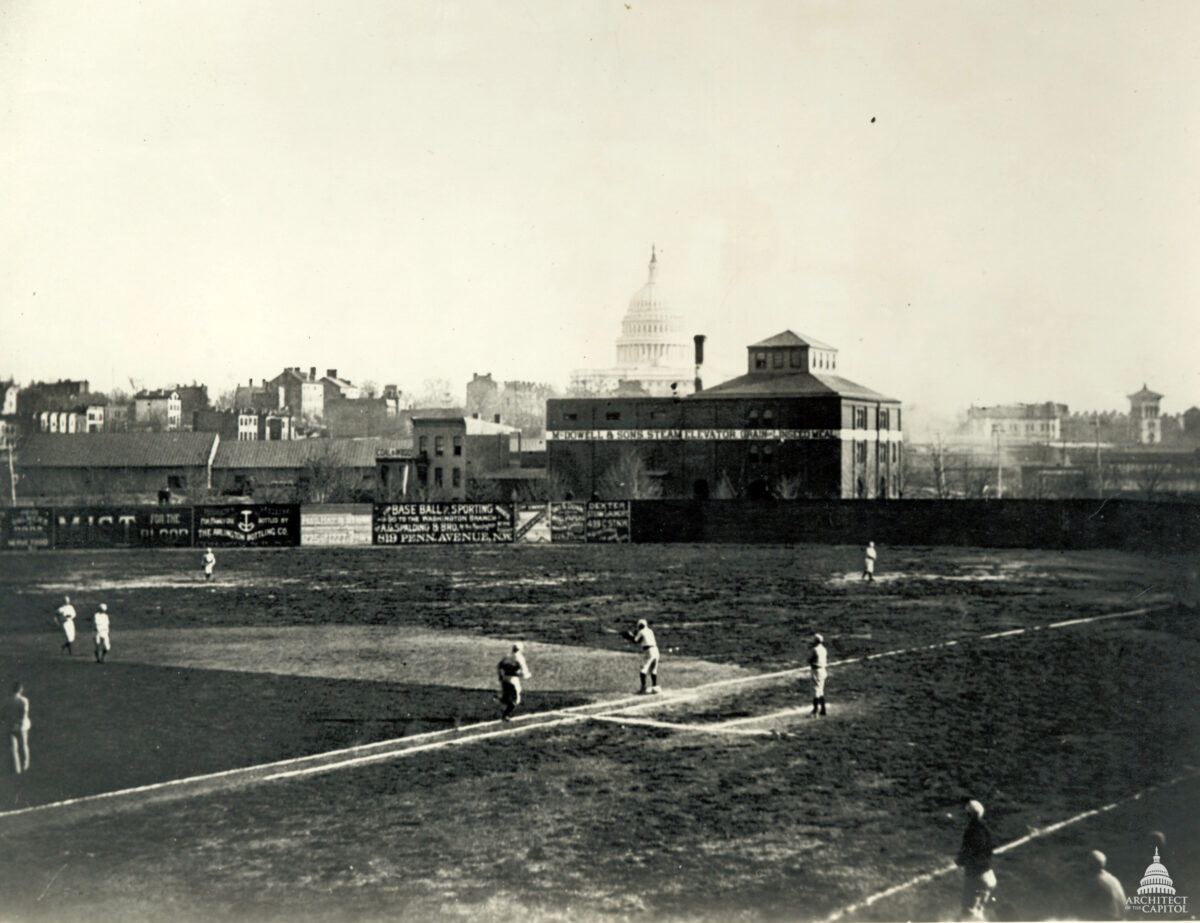 Swampoodle Grounds, also known as Capitol Park, was the baseball field used by the Washington Nationals of the 1880s. The Nationals of the time were a wholly unremarkable team, a cellar-dweller memorable as an answer to a trivia question — who did Connie Mack play for? They played a few blocks north of the Capitol building on the site of what is now the Postal Museum. It was an empty lot, I’m not sure if there were bleachers, and the only permanent structures were the clubhouse and the outfield wall, and even those could be disassembled if need be.

The photo above I first saw at Nationals Park. There was a curated display of photographs of Washington’s baseball history, and I was struck immediately by the Capitol dome looming over the outfield walls. In one photograph, three passions — history, politics, baseball — combine into one indelible image. I have used the photograph as a desktop wallpaper at work and home, both in the original and in a version I colorized. (Colorizing the photograph was my way of dealing with the Nationals’ loss to the Cubs in the 2017 National League Divisional Series. I tuned out of the postseason after the game 5 loss, and to this day have no idea who won the World Series that year.)

The Nationals began play in 1886, so there’s nothing on Sachse’s map of Swampoodle Grounds. That’s in the future. But it’s clear where the ballpark stood. There’s an empty city lot there, at upper right. 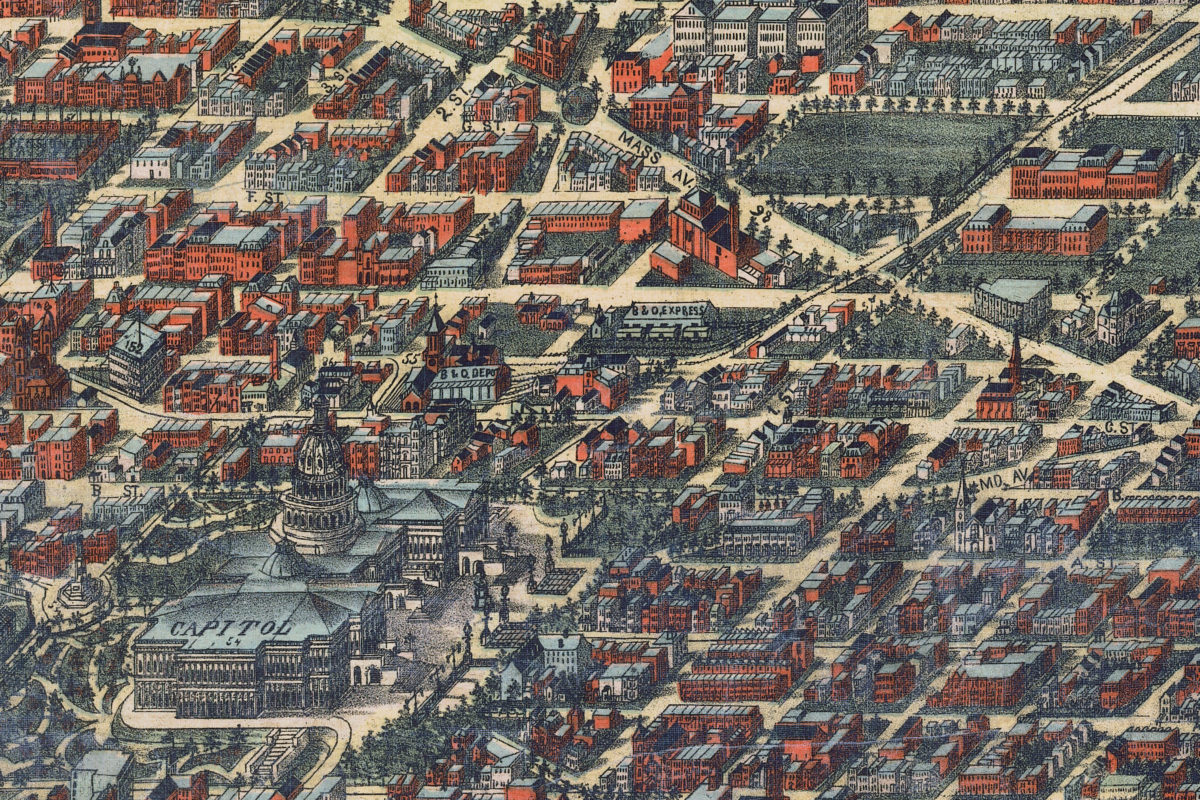 Keen observers will note that the classical styled statue of a half-naked George Washington that now resides in the Smithsonian’s Museum of American History stands outside the eastern entrance to the Capitol building. The Supreme Court building has not yet been built, nor has the Library of Congress or the various Congressional office buildings. It’s a familiar, yet very different, Washington.

Comparing the photograph to the map, you get an idea of how the ballpark was situated — it faced due south or close to it either way — and where the photograph was taken — at the north end of the lot, with first base and the Capitol dome lined up.

The photograph, by the way, in case it’s not obvious, is staged. This is not an in-game scene. The first baseman appears to be taking a throw from either the pitcher or the shortstop… but then who is the right fielder throwing to? And the two people standing near the vicinity of second base… one appears to be holding the bag in his arms. Plus, there are two baseballs on the outfield grass near first base. It looks good, and knowing that it’s staged takes away none of my love for the photograph, but it’s not a snapshot of a game from the 1880s. It merely looks like one at first glance.

Working with the photograph and map, I was able to determine the photograph’s field of vision and even identify several buildings, beyond the obvious ones — the Capitol and the McDowell & Sons building just beyond the outfield wall. The large warehouse-like buildings beyond the center field wall in the photograph, where you can see two men standing and overlooking the wall, seem to be the building labeled “B&O Express” on the map behind what’s the McDowell & Sons building, though longer than it appears to be on the map. (The angles are funky, and things are distorted.) Some identifiable buildings are further away from the photographer than I had thought, and the triangular block along Massachusetts Avenue immediately south of the Swampoodle lot seem to be below the outfield wall and mostly out of sight, with only their roofs visible.

The black line represents the camera angle, from the north end of the lot, across first base, across the McDowell & Sons building just to the left of the smokestack, and straight on to the Capitol dome. The red lines indicate the approximate field of vision. I circled and labeled several buildings as well; the letters will match to an annotated version of the Swampoodle Grounds photograph beneath it. 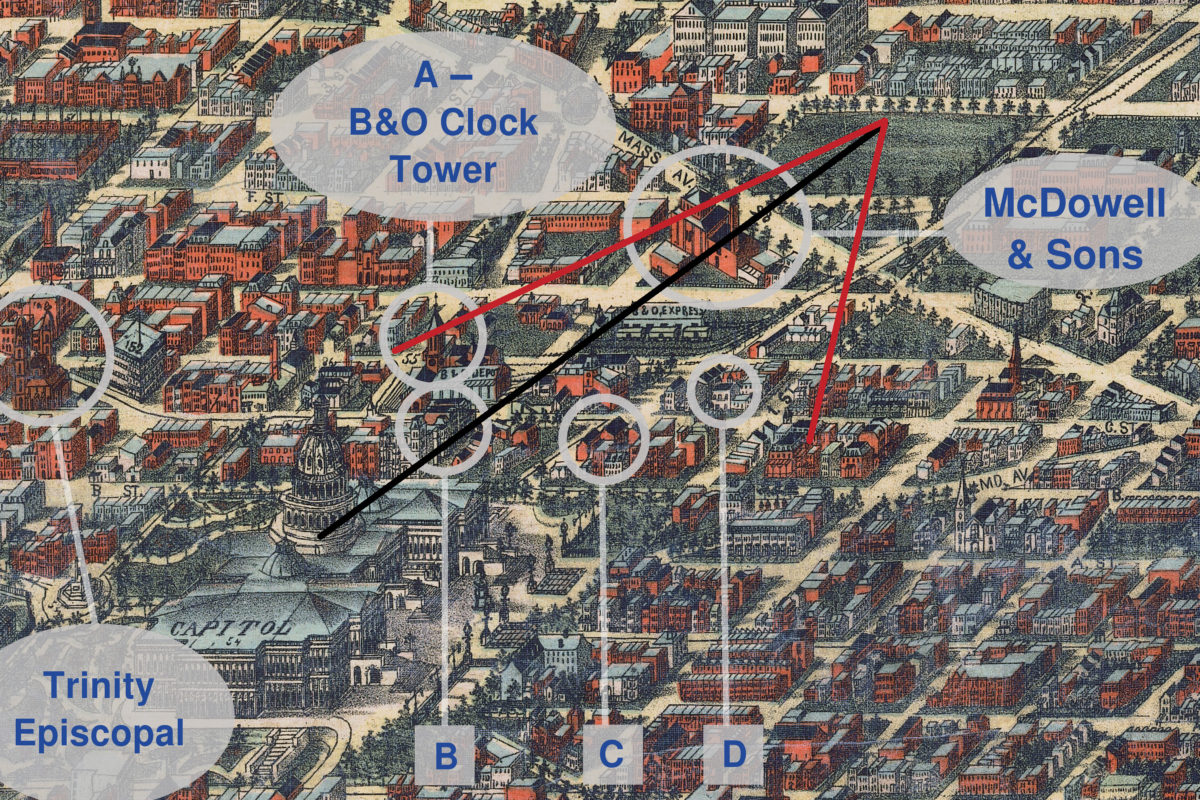 The field of vision to the right of the camera angle seems wider than to the left, but that’s an illusion due to the angle of the map. 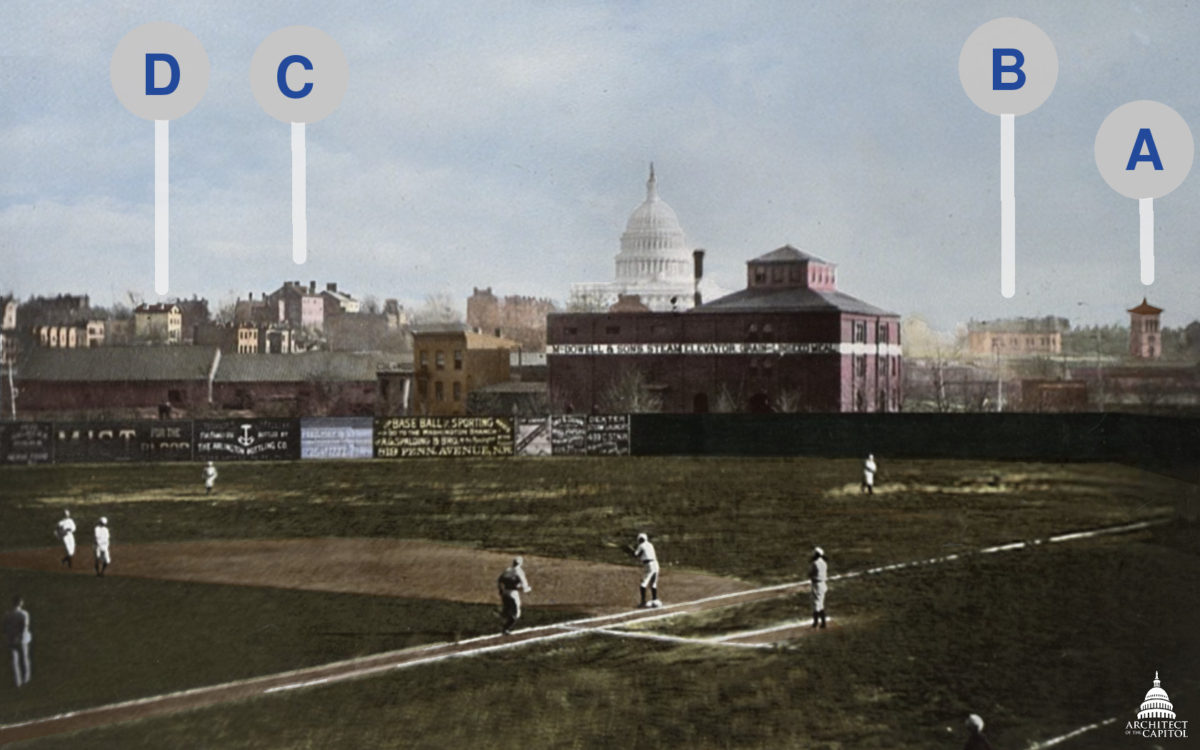 I don’t think I need to label the Capitol dome and the McDowell & Sons building on the photograph, as they’re so prominent. (It’s difficult to tell in the photograph, but there’s another onlooker in one of the windows of the McDowell & Sons tower.) The other four buildings, though, are labeled; the clock tower of the B&O Railroad’s New Jersey Street Station is distinctive.

The two red brick buildings I’ve noted as C on the map and the colorized image of Swampoodle Grounds are — or rather, were — along Delaware Avenue NE between B Street (ie., Constitution Avenue) and C Street. Interestingly, that’s also where Capitol Grounds, the home of the Union Association’s Washington Nationals in 1884, stood. Looking at this map, and that block specifically, I can’t figure out where in that block Capitol Grounds fit.

One site I marked on the map that is not in the photograph is Trinity Episcopal Church, which I’ve written about before. Trinity was designed by James Renwick, the architect who designed the Smithsonian Castle from an unused (and much more elaborately Gothic) design for the Castle. Built in the 1850s, it was used a hospital during the Civil War, and after decades of dwindling attendance, it was torn down in the 1930s. A loss to architecture. 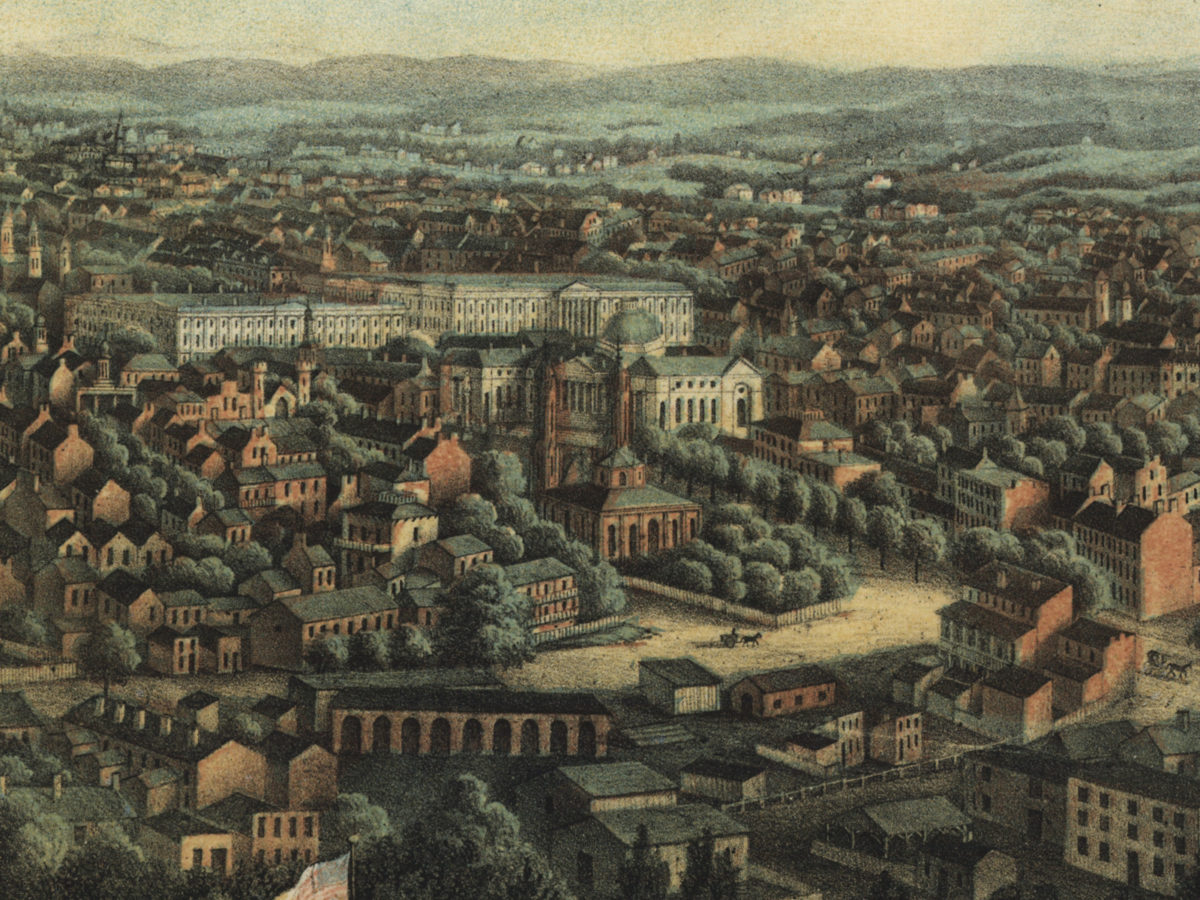 History, politics, baseball. Not bad passions to have, and exploring the map and the photograph has enabled me to indulge all three. While I may not be able to travel back in time to walk these streets for myself, to see Swampoodle Grounds and the Capitol dome — then only twenty-five years old! — I feel like I know more now than I did.