Working from home these last three months, I’ve had to participate in a new thing for me — video conferences!

Unfortunately, I don’t own a webcam. I did, at one time, have a PlayStation 2 camera, and I had the drivers for Window XP for it, but I’ve no idea what happened to the PS2 camera (probably tossed it) and I gave that computer to my parents (who recycled it). I do have sn old smartphone, and there are drivers and software to convert an Android phone into a webcam, but I haven’t delved too deeply into that.

After all, I can run the video conferencing app on my phone.

But I needed a way to make my phone functional for a video conference. I couldn’t just prop it up somewhere, and how can I take notes if I’m holding it?

Well, I’m an industrious sort, so I built myself a cradle out of LEGO to hold it.

I dug into my LEGO box and started building. I made it up as I went. I took apart an X-Wing fighter for parts, tried some things, kept sticking my phone into it to see if I needed more height, and a few hours later, I had something that worked.

Surprisingly, it turned out better than I thought it would. It has guide rails at top and X-Wing engines at the bottom to hold it in place. Some of the bricks are over forty years old.

Some Star Wars fan may be screaming right now, “Wait, you disassembled a vintage X-Wing Fighter for that?!?” Yup. And I’d do it again.

The next week, I was working out of the office due to publishing deadlines when the video conference rolled around, so I took my cradle to the office. I quickly realized that it was too low to work at the office. At home, it sits atop my computer tower. At the office, it would sit on my desk.

But, I’m industrious! I have a supply of LEGO bricks at the office because I never know when I’ll need to build something on the fly — or when I’ll need to relieve some stress by snapping some bricks together and taking them apart.

I have a pen holder on my desk built from LEGO. It was an off-brand set I bought at Five Below two years ago. It was a nice idea, but it needed help, so I went through my LEGO bricks, reworked it, and attached to it a LEGO business card holder. I realized I could use that as a stand. It could support a platform, and the smartphone cradle could go on top of that.

The result was not pretty. 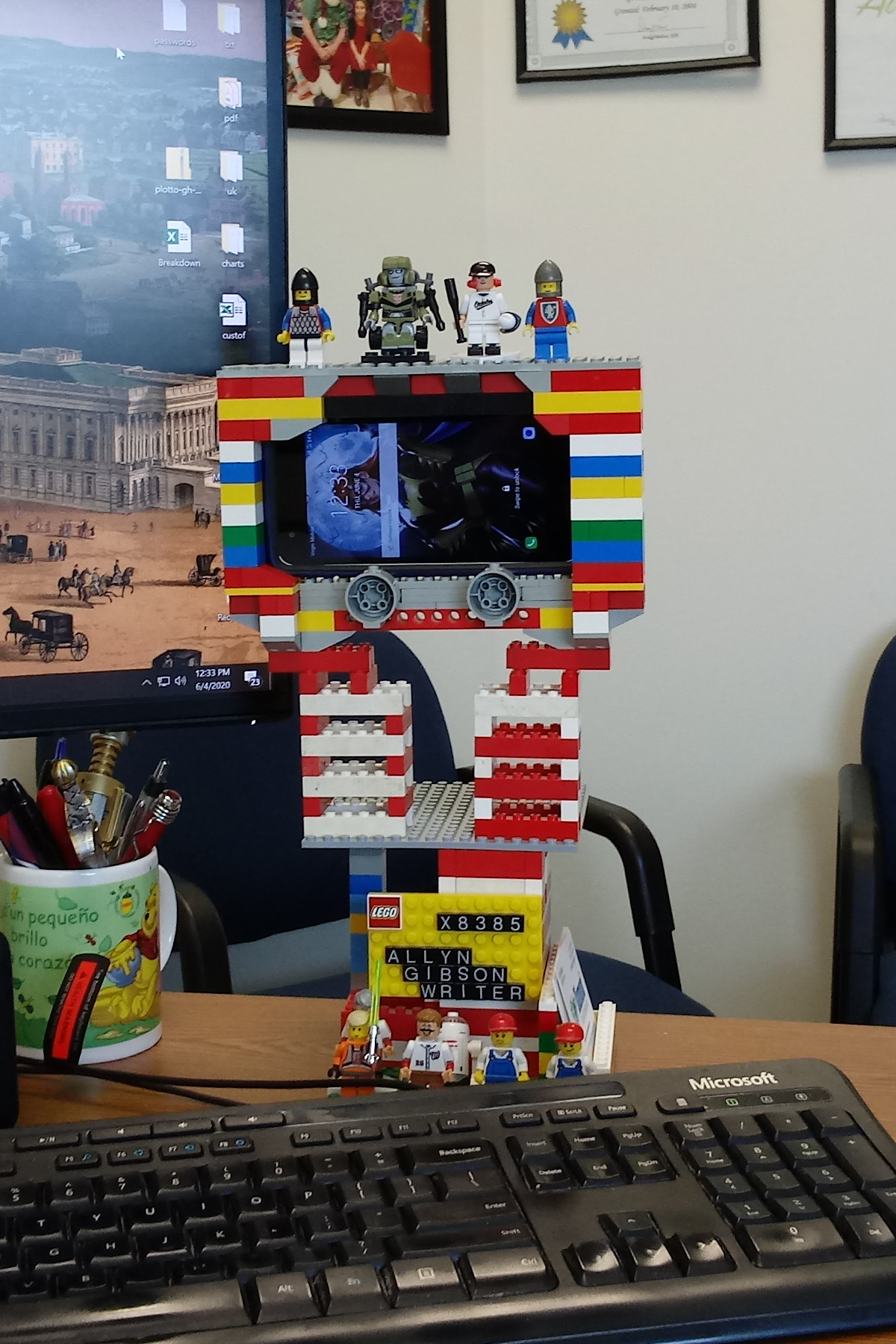 It worked. It wasn’t pretty. Nor was it especially stable.

The platform came from one of Character Options’ LEGO-like Doctor Who sets. (The Weeping Angels set, I think.) But the pillars on which the stand stood were too far apart to attach to the platform, resulting in the awkward supports underneath.

I’ll need to do some rethinking to make the cradle more work-friendly.

Fortunately, I was at Dollar Tree earlier this week, and they have off-brand LEGO bricks for sale. I was curious and bought four bags, two each of yellow and green. When I got home I was surprised to find that these were quality! Out of the bag, they looked like LEGO. They’re a little slicker than some of the older bricks in my collection, more like Hasbro’s KRE-O. They snapped together well. I had to make a supply run, so I stopped at Dollar Tree and bought ten more bags, in a variety of colors.

Last night, I took the cradle apart and rebuilt it.

The cradle had two major problems — it wasn’t especially stable, and it was fragile. If I pressed down on it — or flipped it over and pressed on the base — it would break apart. A couple of places weren’t connected very well to the rest of the structure, notably the beams beneath the phone.

I tore it apart a couple of times, trying to make sure that this was supported by that, that the weight-bearing bricks would support the parts abovethem, that putting my hand on top and pressing down wouldn’t break it apart. It’ll still break, but it’s less fragile now. Those rows of green and blue just below the phone make a lot of difference. 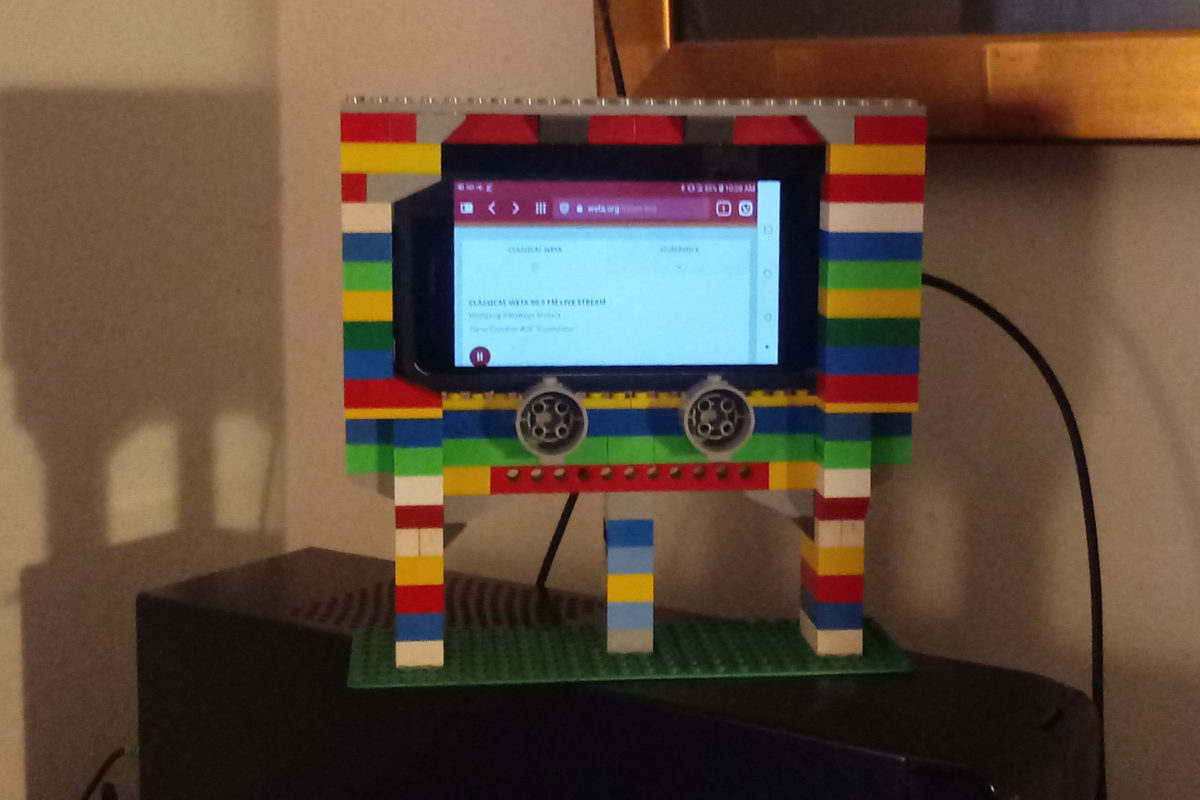 I used far less of the off-brand LEGO than I thought I would — the light green bricks, some of the blue in the engine row, and some of the yellow at the top. The rest is authentic LEGO. Looking at it, touching it, I can’t tell the difference.

The supports remain just too wide for the base I have at the office, so I need to do more thinking to bring those closer in — or come up with a less-unsightly maeans of connecting the cradle to the platform.

If I go into the office next week, that’s something I’ll take a look at.