I have never read The Sandman.

It's a curious lapse in my comic book reading. I generally like Neil Gaiman's other comics work (though I was cold on 1602). The idea of a Lord of Dreams is compelling. I love Wesley Dodds, the superhero Sandman of the 1930s (and I religiously read Sandman Mystery Theatre), and I read Sandman Midnight Theatre, the crossover story between Neil Gaiman's Dream and Matt Wagner's Dodds. (And I have a faded and worn t-shirt of Teddy Kristiansen's artwork from the story.) I bought and read the first Death mini-series — and really liked it.

But The Sandman itself? 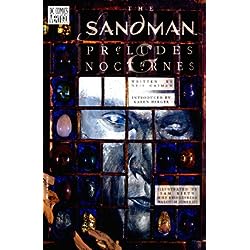 Oh, I started it. Once. I remember picking up my brother's trade paperback edition of the first volume, Preludes & Nocturnes, and starting on it many years ago. I don't remember getting very far in it. I don't remember why I stopped. In retrospect, it probably doesn't matter.

Nonetheless! DC Comics is reprinting The Sandman again, in a new trade paperback edition, with the recolored artwork used for the Absolute Sandman collections, printed on glossy paper. (DC's Vertigo collections have traditionally been printed on non-glossy paper, probably to save money.)

I picked up the first volume, Preludes & Nocturnes, at work this week. Next week, A Doll's House arrives in my hands. At some point after that, I'll pick up the third volume, Dream Country. (The fourth, Season of Mists, is due out at the end of January.)

We'll see how it goes. Perhaps I'll even pick up Mike Carey's Lucifer, a sequel series to The Sandman, when I'm done with The Sandman.

That's not the sum totality of my winter reading plans.

I've ordered some books on writing from BookCloseouts.com to read, get ideas from, hone some skills, fine-tune my language, that sort of thing, including Fowler's Modern English Usage, which is the sort of book that would be nice simply to have around, even if it's not often referenced.

Another book I'm looking forward to reading in the coming months is The Sun and the Moon: The Remarkable True Account of Hoaxers, Showmen, Dueling Journalists, and Lunar Man-Bats in Nineteenth-Century New York, which is about the Moon Hoax of 1835, where New York City newspapers ran a series articles about the discovery of life and civilizations on the surface of the moon.

And, of course, other books as they appear.

I am looking forward to reading The Sandman. I hope I like it; otherwise, I'll have several trade paperbacks in search of a good home… 😉