No one remembers the movies they saw when they were young. I can't tell you what the first movie I saw was; the earliest movies that I can remember going to see were The Black Hole and Race For Your Life, Charlie Brown. The former I've had no desire to see again in my adulthood; the latter I've seen parts of in the last decade and I've found it amusing if not quite up to the Charlie Brown standard. 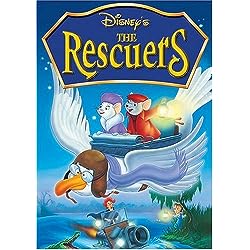 I would like to say, honestly, that The Many Adventures of Winnie-the-Pooh was my childhood favorite film. My mother has told the story of how it taught me how to swing on the swingset, that until I saw the film I just couldn't figure out the "trick." (This isn't unusual. I didn't "get" how to swing an axe and chop wood until I saw Star Trek: Generations.) Given how much I love that silly old bear, it's a film that, clearly, should be an important one in my life, all the way back to childhood.

But no. The movie that I've been told is my favorite is one that I genuinely cannot remember having seen — Disney's The Rescuers.

I am told that, when I was eight or nine, I proclaimed The Rescuers "the saddest movie ever made."

I remember absolutely nothing of the film, except that I think that Bob Newhart may have done a voice in the film. (And no, I can't be arsed to look. A quick Bing or Google search is all it would take, but alas no…) So little has The Rescuers made an impression upon me…

The one childhood film that I do remember making an impression was the animated The Lion, the Witch, and the Wardrobe. It was animated by Bill Melendez, of the Peanuts animated specials. But it wasn't a theatrical film. I bought the DVD of it a few years ago, when the live-action film came out, and I watched it, and it was okay. It wasn't the brilliant piece of work that I remembered from when I was very small. I think, as the years passed, I remembered it as something bigger than it was.

Maybe, though, the films of childhood shouldn't stick with us. We grow up, we grow older, and the person who loved that silly little film of childhood diminishes and disappears. I can't imagine ever wanting to watch The Rescuers, but there was a me that did, that watched it avidly and loved it. Maybe that person, gone now these thirty years, maybe that person is who The Rescuers was for.