One, they are renaming their kids imprint, formerly BOOM Kids!, to Kaboom!

Two, they are going to be doing something with Charles Schulz’s Peanuts. 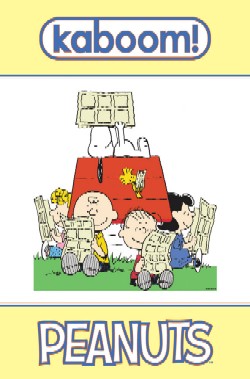 What, precisely, BOOM! intends to do with Peanuts is unclear, though the teaser image certainly offers a tantalizing clue.

Observe the “Peanuts” logo. It’s not the usual handwritten logo that adorned the Sunday Peanuts strip. It is, however, the logo that Dell Comics used in the 1950s and 1960s for a series of original-to-comics Peanuts comic books.

Michael Vassallo wrote a history of the Peanuts comic book for Comics Journal some years ago. These rare comics are little-known and have not been reprinted; with Fantagraphics reprinting the newspaper strips in full and garnering plaudits for their efforts, BOOM! could likewise have a real winner in bringing these comics back into print.

I admit, this is speculation. I don’t know what BOOM!’s plans are. My heart tells me that we shouldn’t see anyone other than Schulz write and draw Peanuts. There was something cosmically poetic about the last Sunday strip being printed within twenty-four hours of Schulz’s death, as if the universe itself were saying, “It is done,” that no one else should write new tales of Snoopy and Charlie Brown and Rerun van Pelt.

But then I see something like Kid Beowulf writer/artist Alexis Fajardo’s sketch of Snoopy as Conan or Beowulf, and I think that someone other than Schulz really could do Peanuts justice.

I know what my preference from BOOM! is — reprints of the old Dell comics. But if BOOM! wants to create new stories, Im willing to be persuaded otherwise if BOOM! decides to do original Peanuts material. Roger Langridge’s take on The Muppet Show, for instance, was utterly brilliant, and if new Peanuts could be of that quality, I would be open to that.