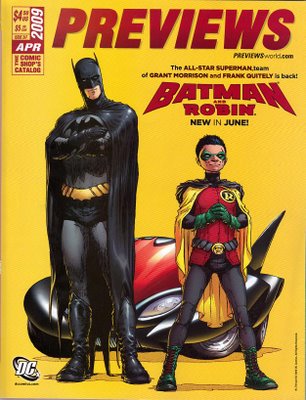 Author extraordinare Dayton Ward can’t be at the Farpoint convention this weekend.

He does, however, have a mission for congoers attending. One that, to some small degree, involves me.

I’ll let Dayton explain fully, but here’s the gist. There are certain authors, myself among them, that he wants pictures taken of with a sign that reads “Dayton Made Me Do This.” And, those who send Dayton their author pictures can win stuff!

I’m going to sweeten the rewards pot just a little.

If someone gets my picture with Dayton’s sign printed up in Comic Sans, the absolute worst font of all time, they can win a copy of the April 2009 Diamond Previews (cover: Batman and Robin #1), with my article “What Would William Shatner Do?” autographed.

I’ll take names and draw one randomly. Prize can be picked up at Shore Leave in July or mailed.

Get busy! Print out those signs! They’ll be useful the whole weekend long!

See some of you this weekend!