On Monty Python: Almost the Truth (The Lawyer’s Cut)

The past few days I’ve been living in a Monty Python world.

Edward R. Hamilton, a remaindered books seller. They also sell DVDs, and in a recent catalog I noticed they were offering Monty Python: Almost the Truth (The Lawyer’s Cut), a six-hour documentary that was shown on IFC several years ago that I’d never gotten around to seeing. It was just $7.95, which I saw was a very good price as compared to, say, Amazon, and thus an order was placed. 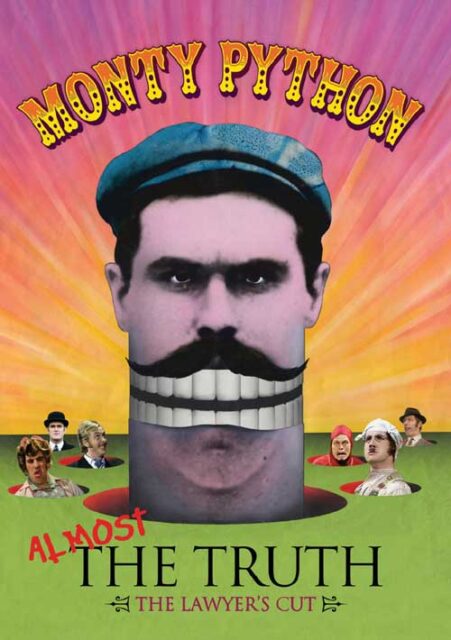 I confess that I am not as familiar with the Pythons as one might expect. I’m actually more familiar with the group’s post-Python work. Yes, I do have the 16 Ton Megaset on DVD, I have three of the four movies, I have the Spamalot cast album and I’ve seen the touring production, but I’ve none of the albums, and my head for Python catchphrases and quotations is virtually non-existent. Yet that was no reason not to pass up the documentary, which had received glowing reviews when it aired back in late 2009.

Think of Monty Python: Almost the Truth (The Lawyer’s Cut) as The Beatles Anthology, but with the Pythons instead of the Beatles. Same basic set-up — the surviving members of the group in question are interviewed individually, and with their interviews interspliced they tell the group’s story from their individual births to their first meetings to forming working groups and then the breakthrough and on and on until the very end. One major difference between the two projects is that there are several non-Python voices in MP:AtT(TLC), such as college friends and modern stars (like Steve Coogan and Simon Pegg and Seth Green, and if anyone can explain the appeal of Russell Brand I would really like to know it), while The Beatles Anthology limited itself solely to the voices of the Beatles themselves and George Martin.

Monty Python: Almost the Truth (The Lawyer’s Cut) runs six hours, and the six hours really quite fly by. The first hour is devoted to the troupe’s pre-Python days, the second covers the creation of Python, and the third covers the BBC series, and the next three hours take the films Holy Grail, Life of Brian, and Meaning of Life in turn, with the final hour also covering things like Graham Chapman’s death, the Holy Grail sequel that never happened, and Spamalot. The final hour of MP:AtT(TLC), much like the final hour of The Beatles Anthology, isn’t entirely satisfying; it’s not that it has so much territory to cover, it’s that certain negative things are simply ignored to paint a rosier view.

There’s some interesting bonus material on the third disc, such as outtakes from the interviews with each of the five surviving Pythons, plus a number of interstiched sequences that were intended for the documentary that simply didn’t fit. Not all of those sequences would have worked — as an example, one is a long and somewhat pointless anecdote by a comedian I’m completely unfamiliar with about his experience in a brothel in Hamburg — but then there’s also a nice sequence about Carol Cleveland and Neil Innes (who is himself the subject of the documentary, The Seventh Python, even though he says in this outtake that he’s unworthy of the title) that really wouldn’t have fit anywhere.

For the Python fan, even a lapsed or casual fan, the documentary is worthwhile. The five Pythons are never uninteresting (though Eric Idle tends to be the most abrasive, and his language at times would scare the bark off trees), and while they may not go into the depth here that the documentaries on the movie DVD sets do, they never lack for things to say on the subject at hand. There may not be a lot that a longtime fan would find new or surprising, but that’s not the point of Monty Python: Almost the Truth (The Lawyer’s Cut). The point, really, is just to bring the Pythons into your home and let them talk about what they did, what they thought about it, and what they thought about one another, and in doing just that, the documentary is perfect, no matter what the price you pay.

And if it happened to inspire a totally mental short story idea, well, I’m not going to argue with that.

Doctor Who reviews will resume next week, when BBC America airs “The Almost People.”