Today I went to GameStop.

I’d gone out to Barnes & Noble, in search of the new issues of MOJO and Uncut, but all I could find were last month’s issues, and while I found a Sherlock Holmes book I wanted, I eventually put it back on the shelf. (I also noticed that my Barnes & Noble only had third printings of George R.R. Martin’s A Dance with Dragons. And it only came out on Tuesday!)

To keep this from being a busted trip, I stopped at GameStop on the way home.

As I’ve mentioned before, as recently as two weeks ago, I was a store manager for EB Games until five years ago, leaving about six months after the GameStop acquisition went through. 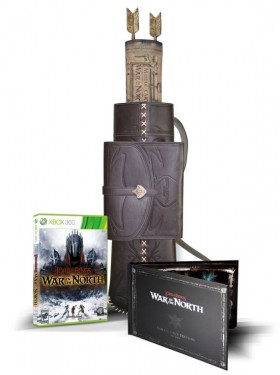 (And yes, that makes me feel old, to realize that I left post-merger EB five years ago in August. Tempus fugit…) I stopped buying games after I left the company. For the longest time, I didn’t even have my Xbox 360 hooked up. And even since I have hooked it up, I haven’t played it for much at all.

But if there’s something that will get me excited, it’s a Lord of the Rings game, and there’s a new one coming out this autumn, The Lord of the Rings: War in the North, developed by Snowblind Studios, the same outfit behind hack-n-slashers Baldur’s Gate and Champions of Norrath.

“In The Lord of the Rings: War in the North, players can become the heroes in the great battle of the North as part of the epic War of the Ring. Exploring unseen lands, story elements and characters from Middle-earth as well as elements familiar from past feature films, gamers will experience extensive character customization and development, expansive co-op gameplay options and upgradeable weapons, skills and special abilities.”

The most recent trailer looks fantastic:

Suffice it to say, this has me excited and tingly. I can hear the doom-laden Howard Shore music already.

Last week, WB Games announced the Collector’s Edition of the game which, in addition to an artbook and a game soundtrack, comes packed in an arrow quiver with a poster by DC Comics Co-Publisher Jim Lee.

Did I want to get the regular edition? Sixty dollars is not an insignificant amount of change, after all. And one-thirty for the Collector’s Edition is seriously significant for a game.

But then I look at that quiver… and I ponder the artbook… and I look at the calendar… and with four months until the game comes out, it’s just ten dollars a week.

And so I pre0ordered it. I only hope the game lives up to my expectations. :h2g2:

The one thing I don’t think comes with the Collectors Edition is the digital comic prequel by Northlanders‘ Brian Wood, which is apparently only available to people buying from Toys R Us or Amazon.

One thing about the GameStop experience today stood out. The sales associate, who was very friendly and downright garrulous about games, highlighted a survey on the sales receipt. It’s the basic customer service survey, and answering the questions put me in the running for a $500 gift card. Typical retail.

What wasn’t typical was the associate’s explanation of the survey. He explained to me that the questions are done on a scale of 1 to 10, one being worst and 10 the best, and then he explained how the scoring works. 9 and 10 are positive points. 8 is zero points. 7 or below is negative points. He explained that everything needed to be nines and tens.

The problem is that, when I sat down to fill out the survey, I couldn’t, in all honesty, give nines and tens on everything. I can’t recommend this particular store to others, for instance; it’s in a lousy location with an impossible-to-navigate parking lot. Yes, he recommended a game to me, but it wasn’t anything I was remotely interested in. At least he didn’t try and push Game Informer on me.

Thus I found myself with a crisis of conscience. The clerk did his job, he did it pleasantly, I ordered exactly what I wanted, he didn’t hassle me to subscribe to GameStop’s in-house propaganda organ. An honest answer on the survey, though, would penalize him, all because of things that are beyond his ability to control.

I had to go with the honest answers; I can’t do otherwise. At the end of the survey was an optional essay box. Naturally, I filled that out, so as to give some context to the answers I gave. Somehow, I suspect that GameStop doesn’t want an honest appraisal of their employees, not if they’re grading on a curve where the only points that count are at the high end of the scale, and everything else is a negative.

Oh, one other thing I noticed. The store had recently had an inventory; there were section tags hanging on boxes in the overstock areas. The things a former manager notices… 😉

All of that said, I have a new Lord of the Rings game pre-ordered, and in a few months I’ll be wandering through the wilds of the north of Middle-Earth, hunting orcs and other wild things.