Yesterday afternoon, a couple of us from work went to Target on our lunch break. While wandering around the store, I found myself back in the Toys section, looking at the LEGO sets they had.

And there I saw the KRE-O Transformers sets.

Hasbro has created a LEGO-compatible building system called KRE-O, and they’ve done about a dozen sets based on Transformers: Dark of the Moon. There are big sets, and there are also two smaller sets, of about 80 bricks each, of Optimus Prime and Bumblebee. Since those smaller sets were just $7.99 each, I bought both Optimus and Bumblebee, and since I didn’t have a lot crying out for attention yesterday afternoon, I built both of the sets. 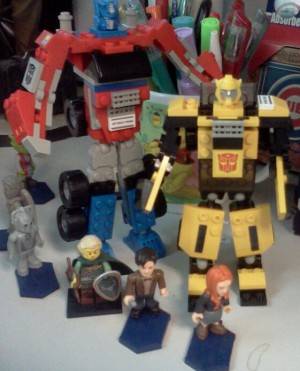 These sets felt very LEGO-like. A few years ago, I’d bought some of the Transformers: Built to Rule sets, which were largely pre-constructed. KRE-O, but contrast, builds the Transformers out of generally recognizable LEGO-like bricks. In fact, I’d say that these KRE-O sets are more like traditional LEGO than some of the LEGO Star Wars sets (which tend to have a lot of specialized, pre-molded pieces).

There are some differences between KRE-O and LEGO. The KRE-O bricks have slightly different studs than LEGO bricks; some are hollowed out, some aren’t, and of course the bricks don’t say “KRE-O” atop each of the studs.

The KRE-O bricks also feel a little more plastic-y than LEGO bricks. But they look like LEGO, they go together like LEGO, and the Transformers models, when finished, look like something that LEGO might’ve made.

I set Optimus Prime and Bumblebee up on my desk with the Doctor Who Character Building minifigs. When I get the TARDIS set, I think I’ll set the Transformers, the TARDIS, and maybe even the LEGO Alien Tripod up together in a kind of multi-franchise throwdown.

Seeing Optimus Prime and the eleventh Doctor together made me long for a crossover between Doctor Who and Transformers. Yes, as much as I want IDW PUblishing to do a Star Trek/Who crossover, I’d be just as happy with a Who/Transformers crossover.

The story almost writes itself. Galvatron wants to deliver a killing blow to the Autobots, so he forges an alliance with the Daleks so that they can conquer Earth together. But what Galvatron doesn’t realize is that the Daleks won’t honor the alliance once their goals are achieved. In spite of the valiant efforts of the Doctor and the Rodimus Prime, the Decepticon/Dalek alliance reaches the brink of total conquest, and as Galvatron nearly achieves his defeat of the Autobots, the Daleks turn on him and his fellow Decepticons. To save themselves the Decepticons will have to set aside their differences with the Autobots and join forces with the Autobots to defeat the greater threat the Daleks pose. It’s a little unbalanced thus far, but otherwise it’s a workable outline.

If you like Transformers and you like LEGO, the KRE-O sets are nice. At least, the small ones are. Maybe I’ll have to buy and build one of the bigger ones.