Doctor Who has not been a part of my life for as long; I didn’t see it until 1984 when the local PBS station made it a Saturday afternoon fixture, showing the Tom Baker episodes plus “The Five Doctors” in the movie format.  In high school I watched Doctor Who with greater regularity; the PBS station in Morgantown showed it in the wee hours of Saturday night, and I loved the brashness of Colin Baker, was indifferent to Sylvester McCoy, had my mind blown by finally seeing the black-and-white episodes of Hartnell, and have blamed/thanked the show for my atheism, since there was many a Sunday morning where I was too groggy to attend church. 😉 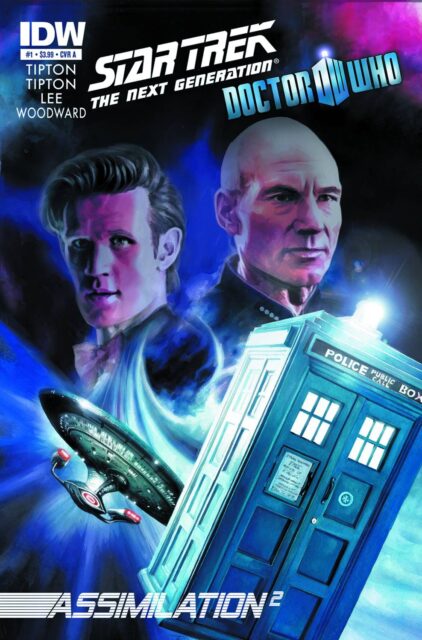 It’s Star Trek! It’s Doctor Who! All in a single package! Well, all in an eight-issue package! 🙂

And it’s not just me that’s excited. There’s excitement elsewhere in fandom. Dayton Ward is thrilled. So is Stuart Ian Burns. Doctor Who Magazine‘s Gary Gillatt, however, is not a fan; it’s safe to say that this project won’t receive favorable notices in Doctor Who‘s official propaganda rag. 😉