Star Trek: The Next Generation/Doctor Who: Assimilation2 #3
IDW Publishing
Written by Scott & David Tipton, with Tony Lee
Art by J.K. Woodward and the Sharp Brothers

Two issues into IDW Publishing’s Star Trek: The Next Generation/Doctor Who: Assimilation2 and I was feeling indifferent. The first issue, discussed here, was okay but not especially engaging; the cover promised the Doctor and the crew of the Enterprise in a single adventure, and what we got instead was the Doctor having a runaround in ancient Egypt while the Borg and the Cybermen did Borg-y/Cybermen-y things, which felt like a weird way to launch a series that Whovians and Trekkies have wanted for years. The second issue, not discussed (though some of my thoughts can be found on Stuart Ian Burns’ blog), was a Star Trek runaround, and while the fannish moments of the Doctor meeting the Enterprise crew finally happened midway through the issue, I still felt like the story wasn’t going anywhere as I turned to the final page — which then, quite suddenly, promised a whole lot. 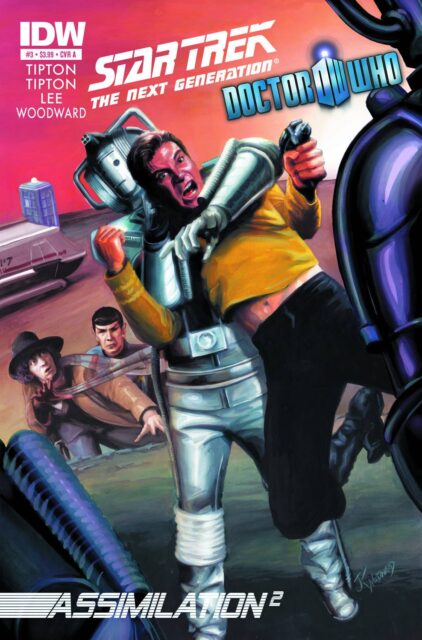 As the third issue opens, the Doctor and the Enterprise crew discover, in orbit of Delta IV, an armada of Borg cubes and Cybermen ships. Massively outgunned, Picard decides that retreat is the better part of valor, and he quizzes the Doctor on the Cybermen. Meanwhile, Data does his own research, and he discovers that there are Starfleet records of the Cybermen — on Stardate 3368.5, Captain Kirk of the Enterprise, on a mission to investigate an incommunicado research facility, encountered the Cybermen on planet Aprilia III, alongside a mysterious man in a floppy hat and scarf who called himself “the Doctor”…

I like Assimilation2. But I don’t love it yet. And I think that the third issue encapsulates why.

After three issues, what are the Borg and the Cybermen up to? We have no idea. What is Picard planning to do to combat the Borg? Again, no idea. The pacing continues to be languid. It still doesn’t feel like the story has started. Instead of moving the plot forward and building tension, the three issues are giving us fannish moments (like a discussion of the Doctor’s age and the final page of this issue).

The tone is off, and this issue highlights that. There’s a flashback to an adventure the fourth Doctor has with Captain Kirk’s crew (similar to the flashbacks in Tony Lee’s graphic novel, The Forgotten), and the artwork is done by the Sharp Brothers (Star Trek: Year Four). In comparison to J.K. Woodward’s painted artwork, the Sharp Brothers’ artwork is penciled, with sharp and bright colors that evokes the original series. The contrast compared to Woodward’s artwork highlights the odd tone of the story; while his artwork matches the tone of the story, that tone feels too dark for the “classic” period of Star Trek: The Next Generation and would suit better the movie-era of the Next Generation.

There are too many characters to work with effectively. Amy and Rory barely appear, and they’ve done nothing of significance since the first issue. (I expect that, around issue #5 or #6, Rory will be captured and assimilated by the Borg because that’s the kind of thing that happens to Rory.) Their non-presence contributes to the feeling that Assimilation2 is a Star Trek: The Next Generation story that happens to guest-star the Doctor; I’m not getting a Doctor Who vibe from it right now.

That said, there are things I like about this issue.

The 23rd-century flashback, though brief, is nicely done, and it has a lovely moment of Kirk fighting the Cybermen, using all of his classic moves — the two-fist punch, the flying-leg kick.

The dialogue continues to ring true.

The mystery of the Doctor’s mismatching memories is intriguing. (I expect the payoff will be, as Stuart Ian Burns suggested at the link above, that the Doctor is developing the memories he would have had if his adventures were in the Star Trek universe instead of the Doctor Who universe.)

The final page puts us on the cusp of a moment I’ve been expecting since the first issue.

I continue to hope that something will happen in Assimilation2, and if anything major and game-changing is about to happen, next issue will be the likely moment because the fourth issue cliffhanger also doubles as the cliffhanger to the first volume of IDW’s collected edition. (In September, a week before issue #5 reaches stores, IDW is publishing a trade paperback collecting the first four issues of the series.) I’m still waiting to be wowwed by this; it hits my fannish buttons, but it’s not hitting my narrative buttons yet. I like reading Assimilation2, but I want to love it.

ETA (7/21/12): Paul Simpson of Sci-Fi Bulletin (and the former editor of Titan’s official Star Trek magazine) reviews the third issue here, awarding it a 7 out of 10.

And Stuart Ian Burns continues his series of insightful reviews of the comic series with this review of this issue. What follows below is the comment I left on his blog in response:

I see people raving about the third issue online, and I can’t for the life of me figure out why. It’s amiable enough, I’m not totally indifferent to it (I’m reading it, after all), but I don’t feel any great love for it. It’s just there.

I know this will read better in a single collected volume. Most of IDW’s Star Trek work reads better that way. (The exceptions are John Byrne’s work, any of the “anthology” series like Captain’s Log or Alien Spotlight, and recently the ongoing movie comic — which, as you say, started off poorly but has become enjoyable and interesting.) But that doesn’t absolve the individual issues of their inability to work on their own merits. If I’m going to put down my money every month, I want to feel satisfied when I’ve read it.

Instead, the only feeling I have is anticipation (for something to happen) and dismay (since nothing’s happening).

It’s almost as if the writers decided that the pinnacle of Star Trek storytelling was the passage through V’Ger in Star Trek: The Motion Picture, the ultimate Doctor Who moment was that episode of “The Sea Devils” where it seems like Pertwee spends the entire episode sitting in the depressurization chamber, and they wanted to emulate all that.

Though the flashback was cool (Kirk’s two-fisted chop and flying leg kick were undeniable fannish moments for me, and I imagine there are readers who were humming the Kirk fight music), I think it was a misstep at this point in the series. We’d just gotten the leads working together, now they knew their enemies were working together, and rather than explore that and move the narrative forward, we have a flashback to another crew and another Doctor.

Oh. Except maybe that’s the point.

I’ve started thinking of this as a Star Trek: The Next Generation story that happens to guest star the Doctor. Star Trek stories have antagonists, but they often serve as a catalyst for the characters’ personal drama. “The Best of Both Worlds” (to use a Borg example) isn’t really about the Borg, it’s about how Riker copes with an ambitious replacement and his own unexpected command. You mentioned “A Matter of Time”; the situation that brought the Enterprise to wherever wasn’t the important thing, the real meat of the story was Picard’s debate over predestination and free will. The antagonists are just a way of getting to the character drama in a Star Trek story.

(Which, by the way, is not something that always works. In “Relics” the Dyson Sphere was infinitely more interesting than Scotty. Yes, it was nice to see Scotty again, but dammit, I wanted to see more of the Dyson Sphere!)

The point is, I think it could be whatever’s causing the flashbacks the Doctor is suffering (since he’s now suffered two — the vision of the Borg in the first issue, and now the full-blown memory of his fourth incarnation) that’s important and the Borg/Cybermen alliance is merely incidental. A catalyst for bringing the Doctor and Picard together.

Or I could be overthinking it.

I’ve also begun to wonder if Amy and Rory will play any meaningful role. I harbor some doubts, because they don’t have a function in a Star Trek story. The TARDIS has landed in a world that everyone knows; the questions the companion(s) would ask so the Doctor could explain are pointless because the audience already knows. They’re in a story where the audience identification and expository functions of the companion(s) are unnecessary.

Yet, I still think that Rory will be assimilated. Or, at the very least, captured. I imagine it would have to play out like this. The Enterprise sends an Away Team to a planet or a Borg cube. But Picard sensibly refuses to let the Doctor and the Ponds go. (They’re not Starfleet personnel.) The Doctor decides that he doesn’t like that answer, so he and the Ponds pop in the TARDIS and arrive on the planet/cube. Riker gets stern — “Doctor, the Captain told you to say on the Enterprise — but everyone accepts this, until things go wrong and they’re all ambushed. Rory gets captured. The rest of the Away Team beams out. End of issue. Next issue, Picard lectures the Doctor, says he doesn’t trust the Time Lord, and the Doctor grudgingly admits that he made a mistake, but now that the mistake is done they have to put aside their differences and work together to rectify the situation.

The trouble with trying to guess where this story will go is that it’s still wide open. How did the TARDIS land in the Star Trek universe? Why is the Doctor having painful memories? Why are the Borg and the Cybermen working together? And what do the Borg and Cybermen want? Going back to what I was saying earlier about this issue as a misstep, at this point in the game the series should have started answering these. Not full-on answers, obviously, but something. Instead, we had the flashback, and we’re still running in place.

Still, I want to see the Doctor do Doctor-ish things. The best thing, in my opinion, would be the Enterprise crew hopping in the TARDIS and going with the Doctor on a tour of important moments in Star Trek history. (Think “The Chase” but not stupid, or “The Daleks’ Master-Plan” without Mavic Chen.)