Somehow, in some twisted cosmic way, this is utterly appropriate.

I am Khan. Khan Noonien Singh, ruler of one-quarter of the Earth, a gentically engineered superman. 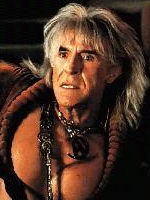 “It was only the fact of my genetically engineered intellect that allowed us to survive.”