A month after the triumphant conclusion to Star Trek: The Next Generation/Doctor Who: Assimilation2, the brothers Tipton return to the world of Doctor Who for the first chapter of IDW’s Doctor Who golden anniversary project, Prisoners of Time. 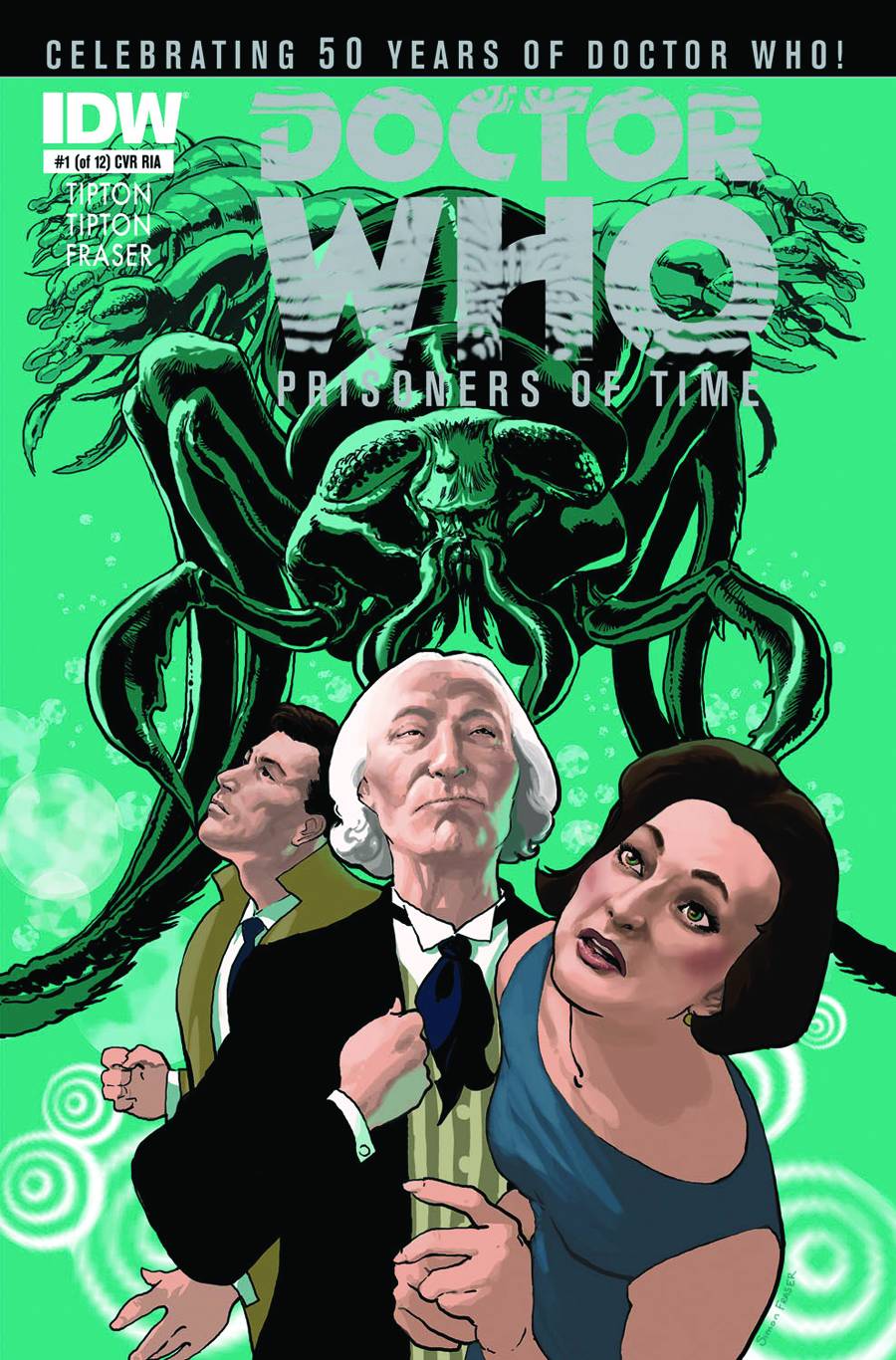 When the project was announced a few months ago, the details were vague. Twelve issues, starting in January, with each of the Doctors getting a single issue in focus starting with the first Doctor in the first issue. Frankly, I thought this sounded like a Doctor Who version of some of IDW’s Star Trek-themed projects like Alien Spotlight or Captain’s Logs, where different creative teams would shine the light on the races or characters of Star Trek in an anthology series of thematically or topically linked one-shots. The solicitation copy for the first issue certainly didn’t offer much in the way of anything concrete:

November 23, 1963: A day that changed the world forever. That day saw the broadcast debut of Doctor Who, which was to become the longest-running science-fiction series on television. And now 50 years later, we pay tribute to one of the greatest pop-culture heroes of all time with this special series, which tells an epic adventure featuring all 11 incarnations of the intrepid traveler through time and space known simply as… the Doctor.

The solicitations for subsequent issues offered little more in the way of elucidation on what Prisoners of Time was — the Tiptons were constant, the artists would change, and the Doctor in the spotlight would also change. But in terms of plot? Nothing was being revealed.

Then Diamond Comic Distributors posted a five page preview, and the first three pages made it clear that there is, in fact, an overarching story in the series. And when I read the first issue, which came out today, I closed the book and went, “A-ha!”

The first issue of Prisoners of Time can be divided into two parts. The first three pages are a prologue that’s heavy on the fanwank (which I will come back to), followed by a seventeen-page adventure of the first Doctor, Ian, Barbara, and Vicki in 1860s London.

The London adventure begins with a visit by the Doctor and his traveling companions to a lecture given by the anatomist Thomas Huxley, an old friend of the Doctor’s. When some of Huxley’s students disappear in the London Underground, the Doctor offers to assist in the search for them, and deep under London the Doctor and Huxley discover the Zarbi of “The Web Planet.” The Animus somehow found itself on Earth, and now it is breeding an army of Zarbi to overrun the planet. When all appears lost, the Doctor formulates a plan…

Compared to Assimilation2, the first chapter of Prisoners of Time is a dense read. There’s a lot going on, the Doctor goes places, he takes charge, he has some charged conversations with Huxley. The smaller space for this story (since each Doctor has only a single issue for their story) is to its benefit; there’s simply no room for the same decompression that marred Assimilation2.

The characterization of the Doctor is fair, but the “Billy fluff” (the term used by Who fandom for William Hartnell’s muffed lines, in particular his habit of calling Ian Chesterton things like “Chatterton” or “Chessingham”) is overused in the dialogue and becomes annoying. More troubling is the Doctor’s ability to steer the TARDIS; he’s able to deliberately land the TARDIS in 1860s London twice (once to mail Huxley a letter, and then once to visit Huxley’s lecture), when a key feature of early Doctor Who was the Doctor’s inability to control the TARDIS.

I wasn’t familiar with Simon Fraser’s artwork before this, and I think it’s fine. His likenesses aren’t photorealistic. He has a consistent way of drawing the characters, and at times his work evokes Tim Sale or Ted McKeever. (Yes, those are two entirely different artists with two entirely different styles. Fraser’s work somehow bridges them.) Fraser doesn’t try to draw the book in a retro style, and it’s not printed in black and white. He’s not trying to ape that era of Doctor Who. Instead, he draws a first Doctor adventure for a 21st-century comic reader, and it works.

The first Doctor’s story here isn’t complicated. It’s a straightforward adventure, the kind of story that Doctor Who Magazine would publish if they had double the space to work with each month for the comic strip. It does ends on a cliffhanger, and that leads us back to the prologue.

You can read the entirety of the prologue at the Diamond link. A mysterious hooded person has data files on the Doctor and his companions, and he intends to do something sinister to the Doctor by separating from his friends. It reminds me of certain sequences in “The Five Doctors” and Tony Lee’s Doctor Who: The Forgotten — the Doctor is being watched, and he has an enemy who can strike at him throughout time and space. It’s not the most original idea in the world, but it works for a story that involves multiple Doctors because it gives a threat that can touch multiple eras and multiple characters. Unsurprisingly, then, we see at the end that, somehow, the first Doctor has lost Ian, Barbara, and Vicki.

But when and how will this cliffhanger be resolved? The next issue, naturally, will focus on the second Doctor in a story drawn by Lee Sullivan.

Each issue will involve our mysterious hooded stranger setting a threat in front of the Doctor, and then the companion in the story vanishes. (This makes me wonder who will be in the eighth Doctor’s story; an appearance by Frobisher on page three gives me hope that we could see Izzy and Junior Cyberleader Kroton.) What we’ll discover is that the stranger is kidnapping the companions with a time scoop (or similar device) and imprisoning them, and the eleventh Doctor, in the eleventh issue, will realize at last what’s going on, and in the final issue the eleventh Doctor will confront and defeat the villain, free the companions, and return them to their proper time and place.

Yes, it’s madness to predict the conclusion of a twelve issue maxi-series when the first issue only arrived this morning. Sherlock Holmes would chastise me for theorizing in advance of the evidence. But this kind of story would fit the format.

On its own, the first issue of Prisoners of Time is adequate. It sets up some mysteries, it overloads us on fanwank, and then it gives us an undemanding story of the first Doctor. For right now, I’m okay with that.

The first three pages are filled with fanwank as the mysterious stranger reviews photographs of the Doctor and his companions.

Among the things to notice?

On page one, there’s a picture of Jo Grant posing naked with a Dalek.

On page two, there’s a picture that I presume is from the Doctor’s marriage to Marilyn Monroe, plus there’s the carving of the Doctor and Donna from “The Fires of Pompeii.” There is also an appearance by an unrecognizable Grace Holloway from the McGann film, marking her first appearance in many years.

On page there, in addition to Frobisher and a terrible likeness of Mickey, there’s Matthew Finnegan and (possibly) Emily Winter from Tony Lee’s tenth Doctor comics.