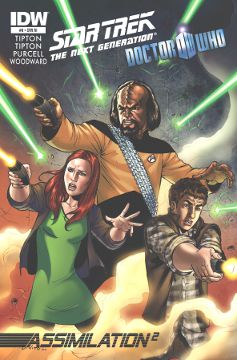 Ten months ago, IDW Publishing announced the comic book I’d waited most of my life to read — a Star Trek/Doctor Who crossover. Yesterday, I read the eighth and final issue.

The best thing I can say? The damn thing is over.

Oh, you’re expecting me to say more than that. I was hoping that would have sufficed.

When last we left our heroes, a Cyberfleet was en route to the Borg’s space in the Delta Quadrant. With the Enterprise-D in pursuit, a small group traveled to the Cybership in the Doctor’s TARDIS. There, Amy and Rory joined a security detail lead by Worf, who showed them how to use phasers, while the Doctor, joined by Picard and Data, went in search of the Cyberleader. But the separate teams found themselves endangered by armies of Cybermen!

Which brings me to the final issue.

It suffers from a frequent Doctor Who finale problem — the conclusion is achieved in the least interesting way possible, and everything you expect to happen does. You expect the Doctor to confront the Cyberleader and outwit him. You expect the Borg Conduit to turn on his seeming allies. You expect a quiet denouement as the heroes say their farewells and return to their respective continuities.

But you also expect to be surprised. And that’s the thing that this issue — and Star Trek: The Next Generation/Doctor Who — never achieved. I never felt surprised.

Instead I felt disappointed.

The series did not end exactly the way I thought it would six weeks ago, but I was pretty close in my guess. The story tied into Star Trek: First Contact, but not in the way I expected it to. And the Doctor had a different choice from the Enterprise crew for a possible TARDIS traveler than I guessed. Still, it ended largely as I thought it would, and the previous issues had given me no reason to expect otherwise.

Yes, this is going to turn into more of a generalized litany of woe lodged against the series rather than a specific takedown of the final issue. But if you’re reading this, chances are you aren’t interested in the final issue on its own, you really want to know what the story as a whole was like.

Which brings me back to, “It’s not very good.”

It’s easy to guess what the elevator pitch for this series was — “The TARDIS lands on the Enterprise, and the Doctor and Picard team up to fight their deadliest enemies!” Conceptually, that should have worked.

The execution left much to be desired.

I don’t know if the rumors of behind-the-scenes turmoil are true. Personally, I doubt that Tony Lee’s departure after issue #4 affected the series in any significant way as there would have been an outline that CBS and the BBC would have signed off on in the development process. Plus, the series was already mediocre to that point, as I explained at length in my review of issue #4. In short, while there may have been lines of dialogue in the latter half that would have been written differently with Lee’s input, I feel confident that we read the story that IDW set out to tell eight months ago.

The thing I I do know is that Scott and David Tipton had no grasp of what Doctor Who was or how its storytelling worked. They treated the Doctor as if he were simply a guest star in a Star Trek: The Next Generation story, with Amy and Rory as unimportant associates.

Doctor Who is capable of being a lot of things. The TARDIS and the Enterprise could easily have ended up at the same planet and the two casts could have been involved in the same adventure, much as we saw in the flashback sequence in issue #3. However, it occurs to me the simplest way of handling the crossover (from a Doctor Who perspective) would be as a “base under siege” story, albeit one where the base (in this case, the Enterprise), is a mobile weapons and exploration platform.

However the merging of the two franchises was done for the purposes of the story, the Tiptons needed to find a way of integrating Amy and Rory into the story. What they failed to recognize is that, in modern Doctor Who, the companions are as important as the Doctor. They are expository characters, yes, but they’re also characters that have emotional and narrative arcs that as just as significant as the Doctor’s. In this story, however, they had no role at all, much to its detriment. Perhaps they could have been endangered as a catalyst for the Doctor’s involvement. (I thought early on that the Borg would have captured and assimilated Rory, and I was disappointed when it didn’t happen.) Or, there could have been a moment where Rory needed to use his medical skills; perhaps if the Enterprise were attacked Rory would have to assist in Sickbay as casualties came in, perhaps even bonding with an injured child aboard the ship. But Amy needed to have a role as well. Perhaps her natural tourist instincts, which got Team TARDIS in trouble in episodes like “The Beast Below” or “The Vampires of Venice,” would endanger the Doctor or the Enterprise. Or perhaps she simply needed to be the Doctor’s conscience and hold him back from a devastating decision. But these things didn’t happen. Instead, Amy and Rory were nothing more than window dressing. AS I said a long time ago, “If this were the episode ‘Sarek,’ then Amy and Rory are as useful as Ki Mendrossen.”

However, the Tiptons’ treatment of Star Trek: The Next Generation was no better. They have the reputation of being IDW’s “good” Star Trek writers, and based on things like Klingons: Blood Will Tell and Mirror Images, it’s not an undeserved reputation. Those are good series, and I recommend them both; the former is a look at Star Trek (in particular, several episodes of the original series) through Klingon eyes, while the latter is a story about the Kirk and Pike of the Mirror Universe. When this series was announced, I wrote in a comment to a blog post I made that “Based on the Tiptons’ previous Star Trek work, I have a hunch that this story could tread on some interesting psychological territory.” It didn’t.

That was the least of their Star Trek problems. Psychological depth is nice, but more important is getting the characterizations right, which they consistently failed to do. For a story that was ostensibly set during the fifth season of Star Trek: The Next Generation, the characters behaved more like their older and more cynical movie-era counterparts, particularly Picard. But throughout the series there were moments where the Star Trek regulars spoke or behaved oddly. (A scene of Crusher and Troi with Amy and Rory midway through the series is perhaps the most egregious example.) The Tiptons seemed not to “get” Picard and his crew.

Assuming that the Tiptons had been able to deal with all of this — better integration of the two universes, roles for Amy and Rory, characterization — they still needed to execute a good story. They didn’t.

First, I have no doubt that the eight issues will read well in a single sitting, and when IDW publishes a single-volume hardcover of the series next year I’ll add it to my collection. In single issues, however, this was a dire read. It wasn’t just that the pacing was languid. It was that they failed to understand that an eight-part story needs seven cliffhangers. At the end of every issue, the reader needed to say, “Damn, what’s going to happen next?” There needed to be rising action, increasing tension, and unbelievable plot twists. Instead, we got limp endings to most issues. Putting the Doctor on the verge of meeting Guinan at the end of issue #3 is not a gripping cliffhanger. Heck, it wouldn’t even have sufficed for a commercial break. This story — really, any multi-part story arc — needed to work as eight individual issues, and it didn’t.

Second, just because Star Trek: The Next Generation was frequently a dull, talky television series, the comic book didn’t need to be. The story felt drawn out and stretched to no good effect. In Bilbo Baggins’ words, it was like too little butter spread across too much bread. In the pages of Doctor Who Magazine, this story could have been told in a four-part comic strip of eight pages each. More happens in “The Iron Legion” or “The Flood” than happens in Assimilation2. Heck, I’d even argue that more happens in the single issue stories “The Time of My Life” or “The Professor, the Queen, and the Bookshop” than happened here. Assimilation2 was the Parkinson Principle applied to comic book writing — the narrative expanded to fill the space allotted.

Third, too much of the story relied upon exposition. Even in the final issue, we had important points made through expository dialogue. If it’s not the Cyberleader explaining his plan or Riker talking about the best friend we never knew he had, it’s the Doctor explaining how the TARDIS works or what will happen when the TARDIS leaves the Star Trek universe. The problem is these characters are doers. They have ships, they go out and find information. It shouldn’t simply be handed to them.

Fourth, the story lacked a sense of jeopardy throughout. The Borg-Cybermen alliance was never anything more than a conceptual threat, even in the final issue when the Doctor and Picard confront the oddly chatty Cyberleader. I didn’t feel like the characters were ever in danger or that they would have to sacrifice something to achieve victory.

Star Trek: The Next Generation/Doctor Who: Assimilation2 suffered from two failures — a conceptual failure and an execution failure. I wanted to read this story for a long time. I couldn’t have imagined ten months ago that it would be so crushingly disappointing. This story could have gone places and done amazing things. Instead, it treated its concept — the union of two of the most famous science-fiction franchises into a single story — as a sufficient reason to be. A disappointing series ended on a mediocre note, and I voted for Assimilation2 in Bleeding Cool’s Most Disappointing (In A Bad Way) Comic For 2012 poll.

The best thing I can say is that it’s over. That there should have been another way. And that I sincerely hope nothing like this ever happens again.

2 thoughts on “On Things I’ve Been Reading”