And something else, too. I read Marion Zimmer Bradley’s Arwen stories, “The Parting of Arwen” and “The Jewel of Arwen.”

Bradley is probably best known for The Mists of Avalon and the Darkover series. I’ve not read the former, despite my interest in the subject matter; The Mists of Avalon is a retelling of the Arthurian myth from a female perspective. In college, I read several of the Darkover novels (a science-fiction series about a human colony world that reverted to a feudal society and developed psionic powers); though Darkover has a passionate fanbase, the novels must have been so unremarkable that I honestly don’t remember a thing about them.

In 1974 Bradley published two chapbooks with stories about Arwen Evenstar, the daughter of Elrond and wife of Aragorn, from J.R.R. Tolkien’s The Lord of the Rings. (Though unlicensed fan fiction stories, one of the stories was later included in a “best of” anthology from DAW Books.) Five-ish years ago, I found scans of both chapbooks online and saved them for later, whereupon I promptly forgot about them entirely. Recently, while going through my “My Pictures” folder on my computer in an attempt to organize it, I found the scans and decided to do something about them. 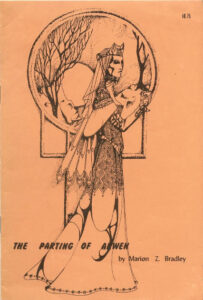 Namely, I wanted to transcribe the stories and then, using Calibre, turn the stories into ebooks for my Kindle. Which I did.

“The Parting of Arwen” is, honestly, the less interesting of the two stories. (It is also the shorter of the two, which is why it was the first one I transcribed and formatted.) It is an account of the final conversation between Arwen and her father Elrond before he departs from Middle-earth. Tolkien covers this in one sentence — “None saw her last meeting with Elrond her father, for they went up into the hills and there spoke long together, and bitter was their parting that should endure beyond the ends of the world” — and Bradley expands this into about ten pages of conversation about Arwen and her decision to remain in Middle-earth and live out a mortal life. If you squint at it you might think you were reading a deleted scene from The Return of the King, but it’s hard to imagine Tolkien actually writing this scene. Bradley writes a decent pastiche of Tolkien and his style, but there’s nothing particularly interesting about the conversation in itself, and ultimately it all feels a bit pointless. 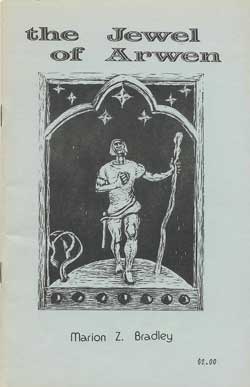 “The Jewel of Arwen” was more interesting, both from a technical point of view and from a narrative point of view.

On a technical level, it was more interesting to put together as an ebook; the chapbook was illustrated (and the scans included those illustrations), it was divided into several chapters/sections, and it had footnotes. Recreating its features, even if only as an ebook for myself, was a fun little challenge.

Narratively, “The Jewel of Arwen” explains a scene from late in The Return of the King (Book VI, Chapter VI, “Many Partings”) — after the Ring has been destroyed, Arwen gives Frodo a jewel that will help him recover from the physical and mental wounds he suffered in the quest. What was this gem, and where did it come from? The tale Bradley tells involves Boromir, the eleventh ruling Steward of Gondor, and his recovery from wounds he suffered in a battle with the Witch-King of Angmar during the fall of Osgiliath. On the cusp of death thanks to a wound from a Morgul-blade, he is taken north to Lothlorien for healing there, but a chance encounter with an Elven lord en route sends him instead further on to Rivendell. Though he regains strength in Rivendell, Boromir must return to Minas Tirth to rule his people, even though he knows that away from the enchanted valley the Morgul wound will again threaten his life. Then, the mysterious Elf Lord tells him a riddle that leads Boromir to discover the magical healing powers of a Nûmenorean artifact in Minas Tirith, a jewel and one of the seven star stones of Gondor. In time, the stone passes into Elven hands, and in the second part of the story it plays a vital role when Celebrían, the mother of Arwen, is captured by Orcs and taken by them into the depths of Moria. Though she lives after her rescue, she is tormented by the experience and uses the jewel to calm her mind and body until, at last, she departs Middle-earth and entrusts the jewel to Arwen.

The presentation of “The Jewel of Arwen” resembles (and prefigures) something out of Unfinished Tales or the History of Middle-Earth series — there’s the story itself, but there’s also explanatory material, an essay, and notes. The only thing missing was Christopher Tolkien’s accout of the textual history of the material. The story proper (since “The Jewel of Arwen” is more than just the story) was interesting, though not particularly in the style of The Lord of the Rings. Bradley’s narrative style felt more like a medieval romance that The Lord of the Rings; it’s dense in incident and low on characterization in the way that, say, Malory’s Morte d’Arthur is. If it weren’t for the fact that “The Jewel of Arwen” was published in 1974, several years before The Silmarillion saw print, I would want to say that Bradley was clearly influenced by that work rather than The Lord of the Rings.

“The Jewel of Arwen” also contains an essay, “Of Elves,” which is reminiscent of “Concerning Hobbits,” the prologue to The Lord of the Rings. It’s of mild interest. The work closes with “Translator’s Notes,” which are utterly misguided. Bradley spends several pages here on scientific explanations for how things work (at least in part) in Middle-earth, such as the Morgul-blades, Kingsfoil, the palantir, and even the One Ring. I understand why Bradley did this — if Middle-earth is our prehistorical past, then Middle-earth must operate on known physical and scientific laws. I question whether this was necessary; it seems like a terrific misunderstanding of Tolkien’s world to attempt to reduce its mysteries to mundanities. (As an example, I cannot imagine Tolkien ever penning the words “decontamination field” in connection with Rivendell.) Fortunately, these are notes at the back are not at all necessary to understand the main story, so they can easily be skipped in their entirety.

Neither one of these stories is essential. Arwen barely counts as a character in The Lord of the Rings, and these two stories don’t flesh her out into one. At most, they give context to Arwen’s cameos in Tolkien’s text. That said, I don’t feel that I wasted my time in either creating the ebooks or reading the stories. I probably won’t revisit these stories, but if I wish to they’re on my Kindle. If you’re interested in them, Google around and the page scans will turn up.